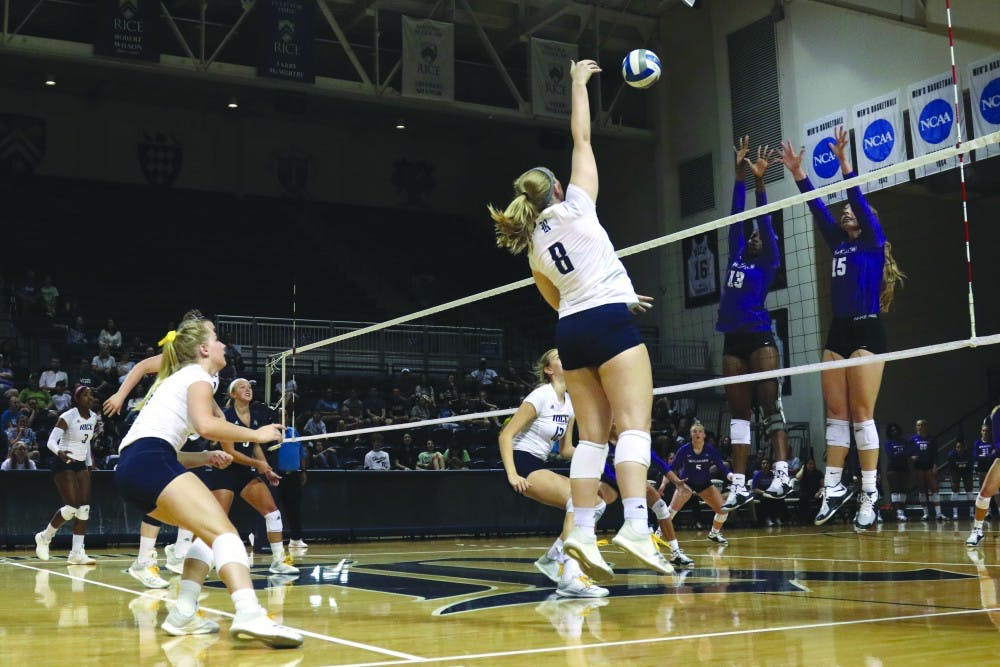 Sunday’s win against FIU was in front of a crowd that is no stranger to success on the volleyball court, including Rice women’s volleyball alumni such as Rebeca Pazo (Brown College ’05), who was inducted into the Rice Athletics Hall of Fame this past weekend.

Head coach Genny Volpe said it was meaningful to secure the victory in front of so many Rice volleyball alumnae, many of whom she coached.

“Every win is cherished, but to have our alumni here to witness our current team today was such a blessing,” Volpe said. “I really enjoyed seeing all of them, and I hope that they know how important they are to our program.”

The Owls opened their match against the Panthers with an aggressive mindset by capitalizing on five of their first six opportunities to pull to a four-point lead in the first set. Throughout the first set, there were six tied scores and two lead changes. Despite the lead changes, the Owls clawed back and won the first set by three points. Sophomore Anota Adekunle and junior Nicole Lennon finished the first set with five kills each between them.

In the following set, the Owls initiated the set with a 6-1 lead and maintained the lead up until a service error late in the set by Lennon made it a tied set. FIU earned a narrow win in the set, 25-22, to tie the match.

The Owls bounced back, scoring four unanswered points to start the third set. While there would be two lead changes in the set, the Owls held on and secured the opportunity to close out the match in the fourth set after Adekunle completed the set-ending kill.

Rice went on and took care of business in a fourth set where they won the set despite being outmatched in number of blocks. Adekunle and Lennon each had five kills, which enabled the Owls to win the set and match. In total, Adekunle finished with a career-high 20 kills and Lennon finished with 14 kills.

After the match, Volpe said she credits an increase in confidence and communication as keys to Adekunle’s success this season.

Despite leading the team in kills with a career-high, Adekunle said her teammates deserve credit for the achievement.

“It feels awesome to share this accomplishment with my team because they are ultimately the ones that help me do this,” Adekunle said.

On the defense side, three players on Rice finished with double-digit digs as graduate student outside hitter Tabitha Brown and Lennon each finished with 12 digs. Senior libero Lee Ann Cunningham outmatched them in total digs with 14 .

Adekunle said the team has had a better start to the season because of their  impetus to work even harder.

“We knew coming into the season that we were going to have a target on our backs and everyone was going to be gunning for us so we just focused on not being complacent,” Adekunle said.

Volpe said experience has been a catalyst for the team’s current record.

“Overall, we are just a more veteran team [than last season],” Volpe said. “We have great newcomers as well that are contributing and learning from the veterans.”

Rice will next take on the University of North Carolina, Charlotte this upcoming Friday  Nov. 1, at 5 p.m. in Charlotte. The Owls’ next home match takes place against Florida Atlantic University Nov. 8 at 6 p.m. at Tudor Fieldhouse.