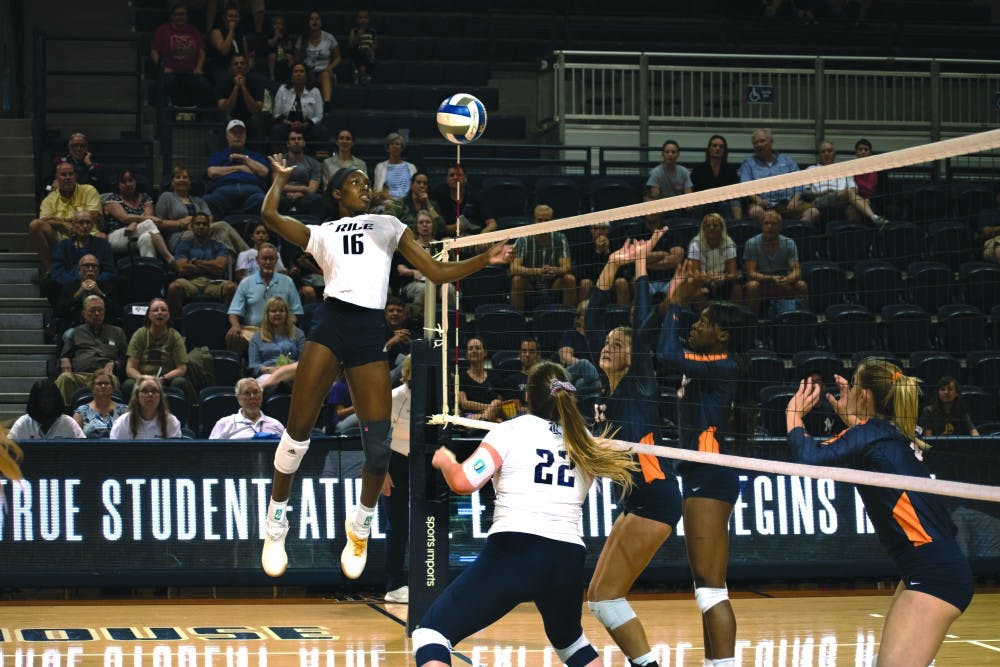 Volleyball improved to 13-1 on the season with two wins this past weekend. The Owls beat the University of Texas, El Paso University last Friday in straight sets, and finished the weekend by sweeping the University of North Texas on Sunday.

“We put up some good numbers [offensively],” Volpe said. “But I thought our defense and our blocking were really solid, and I think helped us. We worked on our block last week and I saw that transfer into the UTEP game and eventually at North Texas after we settled in a bit.”

Those two games marked the start of conference play for the Owls, which brought a few challenges, according to senior middle blocker Grace Morgan.

“In the North Texas game, the first two sets were close,” Morgan said. “But we kept our cool and never doubted that we were going to win that game.”

The Owls jumped one spot in the national rankings this week, from No. 22 to No. 21 in the AVCA coaches poll. Junior outside hitter Nicole Lennon said she credits the team’s success last weekend in part to its explosive offense.

“Once we had the chance to, we put our foot on the gas,” Lennon said. “So as soon as we started to get that lead, we made that spread bigger and bigger.”

On Monday, Lennon was named Offensive Conference USA Player of the Week for the fifth consecutive week, tying the conference record.

“Our offense has been so smooth and so spread, that it allows me to be open and gives me so many more opportunities to do my job,” Lennon said. “I can’t do my job if everyone else hasn’t executed as well.”

Volpe said she has nothing but praise for the star junior, specifically with regard to what Lennon has improved upon since last season.

“[Nicole] has diversified her attack,” Volpe said. “She’s got the power shot, she’s got the off-speed shot. She can attack the ball from the back row really well. That’s really improved since last season.  She’s really quick off the floor, and she’s really powerful in her attack. I’m really pleased with her, she’s put up big numbers and has been key to our success.”

The next hurdle for the Owls is a 9-6 University of Texas, San Antonio team, one that also won their first two conference games this past weekend. According to Volpe, UTSA poses a challenge.

“UTSA is always a formidable opponent. They do a great job every single year of bringing out a team that is going to compete hard,” Volpe said. “They’re really aggressive and scrappy. They tend to attack the block a lot, so we’re going to have to continue to work on our block. They’re also a very strong passing team, so we can take them out of the system by serving aggressively. We just have to rely on and trust our system, because it works when we execute at a high level.”

Against UTSA and going forward, Volpe said she wants to see her team approaching every game individually, and with serious intent.

“I want to see us mentally approach this match like we do any other,” Volpe said. “Every single time we step on the floor we’re looking to get better. I think our team has done a pretty good job of that. But as you continue to have success, you want to make sure that you’re not taking anything for granted.”

According to Lennon, Volpe’s message is being received by Rice players.

“[Volpe] always says [have an] ‘underdog mentality,’” Lennon said. “So no matter how good your performance was last game, always focus on the next one. Be the best you can be for that game.”

Volpe is just one victory shy of reaching 300 wins in her career, all of which has been spent at Rice. Volpe said a few things stand out about her time as coach of the Owls.

“I’m most proud of the type of people we are recruiting here, and I really value the relationships I build with my players and my coaches,” Volpe said. “Our team and the players that we have work extremely hard. They work hard for us coaches and they work hard for each other.”

The Owls will put the nation's fourth-longest active home win streak (16) on the line this Friday, Oct. 4 when they host UTSA at 6 p.m. in Tudor Fieldhouse.