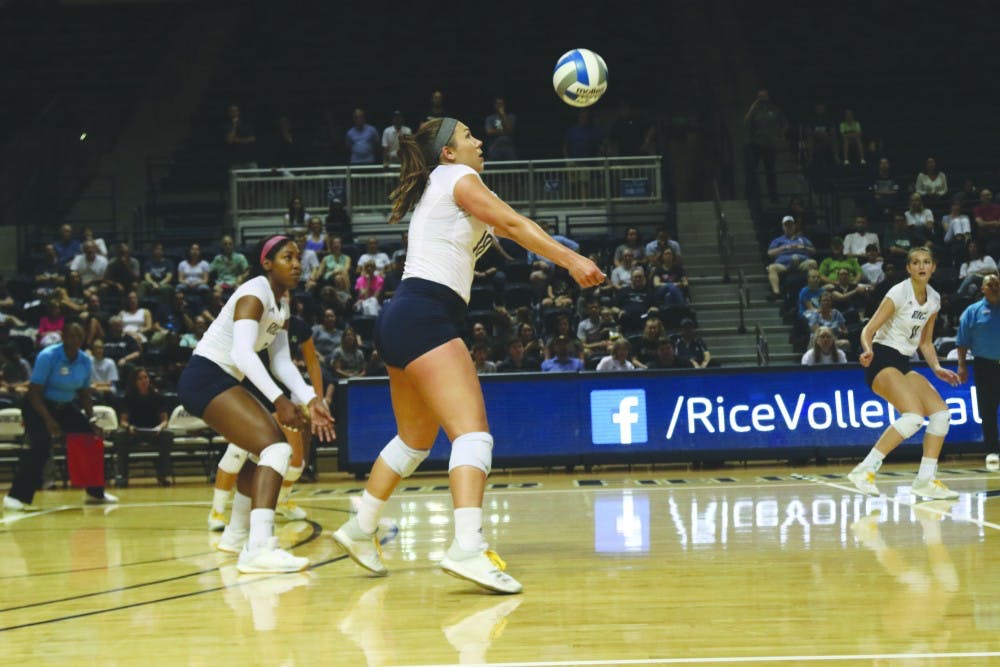 On Monday, Rice volleyball was ranked No. 9 in the nation in the NCAA’s first Rating Percentage Index rankings of the year — the highest ranking in program history.

RPI is a computer-generated ranking system that incorporates both a team’s win-loss record and its strength of schedule. It is one of many tools the NCAA weighs when selecting which 64 teams to invite to the end-of-season NCAA tournament.

Head coach Genny Volpe said the Owls’ high ranking is a reflection of both the team’s strong performance and a carefully crafted preseason schedule.

“I think [the ranking] says that we’ve performed really well against quality teams,” Volpe said. “This preseason was created to have some good opportunities to get some high-RPI wins … The teams that we played in the preseason, a lot of them were top-50 in RPI last year,” Volpe said. “And then of course, highlighting the Texas game, and pulling off that win … The numbers don’t lie: That ranking shows how significant those wins were.”

This season, Rice has a 14-1 record, with the team’s sole loss coming against  No. 37-ranked Stephen F. Austin University. In those 15 matches, Rice has won 44 sets while dropping eight. The team ranks among the top 25 nationwide in assists, digs and kills per set, as well as in both hitting percentage and opponents’ hitting percentage.

Senior libero Lee Ann Cunningham said much of the team’s success this year can be traced to two strengths.

“I would say it’s twofold: our mentality and our work ethic,” Cunningham said. “It started when we [were] in Italy, playing different teams, which really gave us an advantage [to] become comfortable with who we are, and develop a team sense of personality: so that’s the hardworking [factor]. And [our mentality]: No matter who’s across the net, we want to play our best game.”

Opposite hitter Tabitha Brown, a graduate student, transferred to Rice after spending three years at Wichita State University and one year at the University of Alabama. According to Brown, the competitiveness of Rice’s bench players elevates the entire team’s level of play.

“What sets us apart is that [the players] who are not starting [are] still challenging the people who are starting,” Brown said.  “It’s hard to have motivation when you’re not playing, [but] they’re still doing their best at practice; we’re all doing our best. I think that reflects off of everyone on the team: Everyone’s working hard and having a good attitude.”

Junior outside hitter Nicole Lennon continues to lead the Owls’ offensive attack, with this week marking the first of the season where she did not receive the Conference USA Offensive Player of the Week award after tying a C-USA record with five consecutive wins. As of Tuesday, she ranks No. 4 in the nation with 5.23 kills per set, and has registered five matches this year with at least 20 kills. But according to Volpe, it’s not just Lennon’s offense that has improved this season.

“[Lennon is] continuing to embrace learning,” Volpe said. “When she was a freshman she was ‘jump high, hit hard.’ Now she’s learned how to minimize her errors and manage her game ... [Now] she also has touch and finesse. [But] she’s also worked hard at her backcourt game: her defense and her passing, so she plays all the way around [the court]. She’s really embraced trying to become a better defensive player and passer, and she has: I think that’s been one of the biggest improvements for her — her ball control and her defense.”

With Rice’s competitive out-of-conference schedule completed, the team’s attention now shifts to its conference opponents: The Owls have 11 games left before the C-USA Championship tournament in late November, and all 11 are against C-USA teams. However, just four of those matches will take place against teams whose RPI ranks in the top 100 nationally. But Volpe said she doesn’t expect the less-competitive schedule to impact the team’s performance.

“I think the core of the team genuinely [understands] that we’re working for something bigger,” Volpe said. “We really have high expectations and high goals beyond conference. If we take our foot off the gas for a second … you’re opening up a window for a team to beat you at any time; we’ve learned that lesson before. Luckily, I think this team is mature enough to understand that … we’ve got to continue to focus on getting better and putting the work in [during] practice.”

Besides adding another win to Rice’s season total, last Friday’s victory against the University of Texas, San Antonio marked another milestone: Volpe’s 300th win as the Owls’ head coach. According to Volpe, her assistant coaches and players deserve much of the credit.

“I feel very blessed to work at such a great place, and to have great assistant coaches,” Volpe said. “I can’t say enough about the people that work for me now, and have worked for our program over the past years … But the players are the ones that got those wins, and I really feel that way: They put on that jersey and go out there and compete … Every player that’s come through, I just feel so fortunate to have coached all of them.”

Next, Rice faces Southern Mississippi University on Friday at 6 p.m., following with a match against Middle Tennessee State University on Sunday at 1 p.m. Both matches will be played at Tudor Fieldhouse.