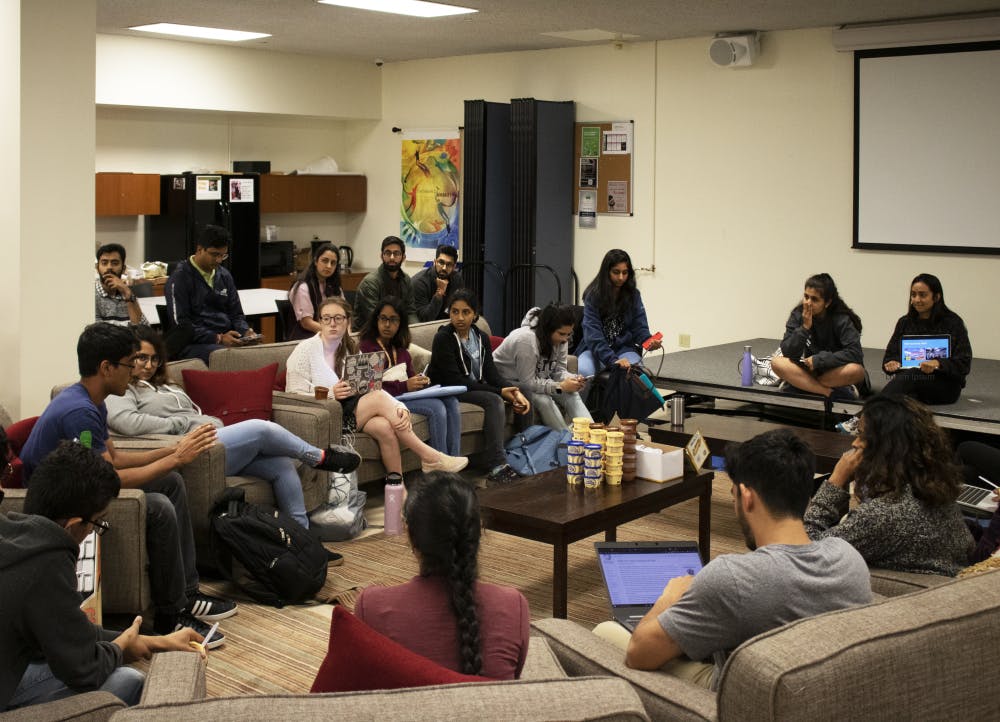 Baker College junior Saniya Gayake and senior Annum Sadana organized the event. At the town hall, Sadana talked about how Modi has been criticized for a lot of things in national and international news, including rising acts of violence against minorities in India and Hindu nationalism, and the Gujarat riots.

“There was also a protest in light of recent political moves in India by Modi and the [Bharatiya Janata Party],” Sadana said.

“The campaign he ran on, which is on his policy platform online, talked about anti-poverty programs,” Sadana said. “In his first tenure as Prime Minister, he ran the Swachh Bharat Abhiyan, which was the Clean India campaign, a popular movement.”

Gayake said that she and Sadana had been talking about how despite the size of Howdy Modi, people on campus were having small and infrequent conversations about it.

“There were so many of them, it was very intimidating for us to make them do anything,” Sadana said. “I think that it would’ve been an even safer space for discussion if they had been asked to leave.”

Sadana said that the questions were structured in a way that would allow students to share their values and sentiments about the event, and think about their South Asian identity on campus and how it impacts them civically.

“When the adults did speak it turned a little more into a debate-style forum where it felt like we were actually taking sides on a political issue, which was not what our original [intention] was,” Sadana said. “It was to provide some basic fact-based, different source-based information and then talk more on the basis of our own identities as South Asian students at Rice. But I do think that a lot of students shared pretty openly and vulnerably regardless of that.”

Gayake said that she felt the student opinions were varied, diverse and balanced.

Anu Singh, the president of Rice Hindu Students Council, says that she understands that the SAS wanted the event to be undergraduate student-centered, but graduate students also attended the “Howdy, Modi!” event and their perspective could have been shared at the town hall too.

“Based on the event description that SAS gave, it said ‘open to everyone’ and it said it in all-caps,” Singh said. “I feel like if people had some connection to Rice and they wanted to come and share, suppose they had more background on this topic, I think it would’ve been nice to include them in the conversation as well.”

Sadana said that they wanted to make sure the invitation extended beyond those who are formally SAS members, including people in the Muslim Students Association, the HSC and others who are not associated with these organizations.

“It was somehow interpreted and reached a population we didn’t anticipate it reaching, and that was very surprising to us because I think a lot of clubs make public Facebook events all the time,” said Sadana.

Singh said that they know that a lot of students at the HSC have different views on Modi.

"[The HSC does] not claim to support or go against anything Modi says, because we are not a political club,” Singh said. “We’re a religious club and we don’t want to impose those views on our members.”

Singh said that the HSC wanted to represent the Kashmir Pandit issue at the town hall, which she said has been largely ignored by most discussions on campus.

“We wanted to bring this to the table because having balanced dialogue on these kinds of issues should also include the ethnic cleansing of Kashmir Pandits from the Kashmir Valley,” Singh said.

At the townhall, Singh spoke about what she felt happened in Kashmir.

“Although we [members of the HSC] had different political views on Trump, our main purpose was to support what we felt that Modi did,” Singh said. “We felt that it gave an opportunity for Kashmiri pandits who had a mass ethnic cleansing around 1990, and we felt that [the removal of] Article 370 was one of the reasons why they could have a safe return to their home.”

Daanish Sheikh, a member of the Rice University Muslim Student Association, who also attended the town hall, said that the use of the ‘ethnic cleansing’ insinuates that it came about through genocide. He also said that this would not justify the removal of Article 370, nearly 30 years after these events.

Singh said that the town hall was a good initiative by the SAS to have a dialogue on the “Howdy, Modi!” event.

“It seems like a lot of people either didn’t know about it or they knew about it and wanted to get different opinions,” Singh said. “I’m glad that they had done some research on the topics and they had people from the protest side and also people who had attended. I appreciate that they sought to include them in the conversation.”