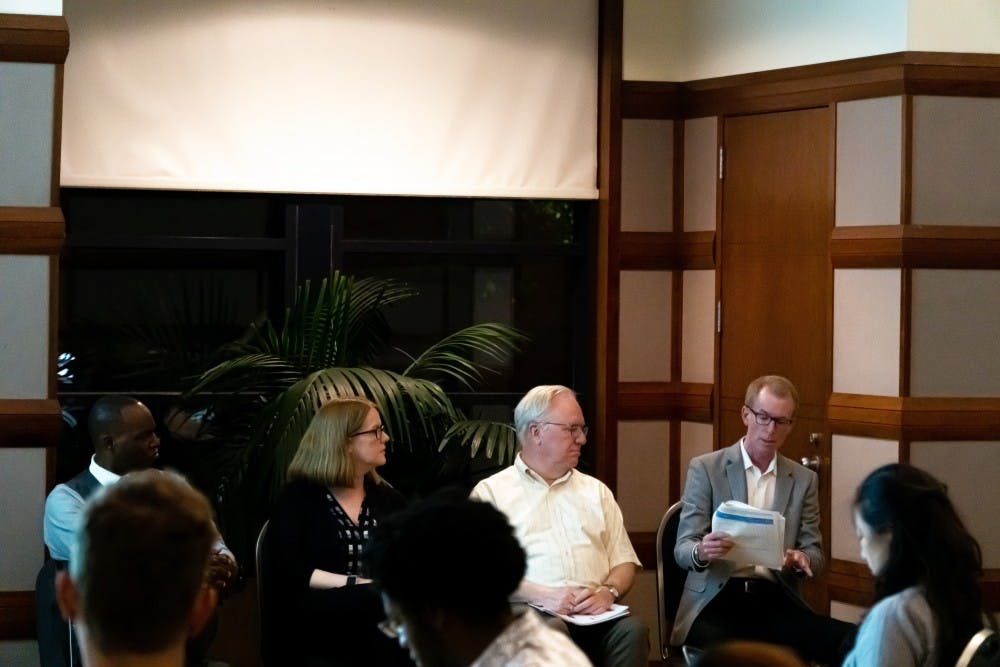 In response to the release of the results from the Association of American Universities Campus Climate Survey on Sexual Assault and Misconduct last week, the Student Association held a town hall in Farnsworth Pavilion on Monday to discuss the findings of the survey as well as steps the university should take going forward in response.

At the town hall, members of the Interpersonal Violence Policy committee presented data from the AAU survey along with their conclusions, followed by a discussion open to all students and administration in attendance.

“Our main conclusion that we came to was that while the reported incidents of sexual misconduct at Rice are below national averages, they still indicate a need for improvement in campus culture, policy and support,” Ashley Fitzpatrick, a member of the IVP committee, said.

Findings from the Data

Among the 33 peer institutions that took this survey, Rice had the highest response rate at 71.6 percent student participation.

In 2015, students at Rice completed the Survey on Unwanted Sexual Experiences, with a similar response rate of 72.3 percent. At that time, the SUSE found that 19 percent of female students and 5 percent of male students had experienced some form of unwanted sexual contact while at Rice.

Results from the AAU survey saw a slight increase in these numbers, with 22.6 percent of female students and 5.2 percent of male students having experienced some form of unwanted sexual contact while at Rice.

Laney Baker, the executive director of Students Transforming Rice Into a Violence Free Environment, said she attributes the increase in the reporting of sexual misconduct outside Rice to  broad cultural changes.

Grace Wickerson, president of the Student Association, said that just looking at the data alone does not reveal the entire story.

Despite Rice’s high response rate to the AAU survey, Baker said that the data may still not be an entirely accurate representation of student experiences.

“This is still incredibly underreporting what's actually happening in the student body,” Baker said. “People who choose not to take the survey are survivors who opened it and then were like ‘this is about sexual misconduct and I am not in a state of mind to take it.’ I know just off the top of my head, three of my close friends who are survivors did not take the survey.”

Wickerson said they do not believe underreporting has a great effect on the survey findings and the numbers can be trusted.

“Because of our response rate [Dean of Undergraduates Bridget Gorman] is fairly confident it’s a representative number,” Wickerson said. “I don’t really think underreporting is the issue. I think other schools you might be able to look at that, but Rice had the highest response rate of any institution because it was tied to the Survey of All Students.”

Baker said that in order to improve campus climate, Rice needs to reevaluate how they use the term “Culture of Care.”

“Rice to some degree uses the culture of care to silence the experience of survivors,” Baker said. “It can't be ‘Culture of Care [means] we don't have sexual harassment and sexual assault here,’ we know that’s not true clearly based on these results. So we need to instead change the conversation [around the culture of care] to, ‘when [sexual misconduct] inevitably happens, we take care of survivors, we lift up their voices, we believe them.’”

Wickerson said that there is no official definition of Culture of Care and that for a large majority of Rice students it is primarily associated with issues regarding alcohol.

“That phrase has no definition on any official website. And so how do you make this term have legs when it doesn’t hold any formal basis?” Wickerson said. “The SA actually has existing data from [th previous Survey of All Students] on Culture of Care and when you look at the data you see, I think it was like 500 or so responses are related to alcohol or partying but so much fewer responses are related to like supporting survivors of sexual assault or supporting mental health and wellbeing.”

According to Kusha Gupta, director of the IVP committee, Rice’s self-reported bystander intervention numbers overall were higher than the national averages. Gorman said she attributes this to Rice programs such as Critical Thinking in Sexuality.

“I was encouraged to see significant rates of bystander intervention among our students,” Gorman said. “This reflects our culture of care and the content of our CTIS course, which both freshman and sophomore students who took the AAU survey had completed.”

The bystander intervention statistics from the AAU survey were self-reported; students answered yes or no as to whether they had witnessed various forms of sexual misconduct since coming to Rice. 18 percent of respondents said they had witnessed someone acting in a sexual way that made someone else feel uncomfortable, and 10.1 percent said they witnessed a situation they thought could have led to sexual assault.

However, at the town hall students and administration discussed a need to still improve bystander action and ways that this could be accomplished.

Allison Vogt, Associate Dean of Students and Deputy Title IX Coordinator, said a barrier to effective bystander intervention may be confusion among students regarding behaviors to watch out for.

“We’re looking for these very egregious behaviors that we might see on TV or in movies,” Vogt said. “As opposed to some of the other types of things we might see, like someone adding more alcohol into someone’s drink or trying to feed them more alcohol so they’ll loosen up. Or even just running up on someone on the dance floor and groping them. I think sometimes we don’t think those are intervenable areas, but they absolutely are.”

At Monday’s town hall, Nathan Spindler-Krage, a member of the IVP committee, said that a focus for the IVP committee was on the data regarding the experiences of the TGQN population with sexual misconduct.

“Those students experienced the highest rates of intimate partner violence, approximately four times the average for Rice students, and they experienced the highest rates of non-consensual contact of all students,” Spindler-Krage, a freshman at Sid Richardson College, said. “One of the things that the committee is looking to do in the future is partner with Rice Pride to gain more knowledge and to gain more specific answers about the experiences of gender queer students and the LGBTQ+ community as a whole.”

Baker said that she found the statistics regarding students knowledge about resources on campus encouraging.

“If you look at the numbers of knowledge of resources on campus and comfort accessing resources there are great improvements since 2015,” Baker said. “We can look to that as a signal of success of things that Rice is doing as far as STRIVE and CTIS and other initiatives but I don't think that it means that there's no room for improvement.”

According to the AAU survey results, only five percent of students were not aware of any of the resources offered to survivors by Rice.

Gupta said something that stood out to her were the statistics on reasons why survivors of sexual misconduct chose not to report, specifically the number of people who said they did not contact any resources because they felt that their experience was not serious enough.

“That was a big number for us. How can we validate survivors’ experiences, how can we make sure people are educated about how regardless of alcohol or drugs or the type of sexual misconduct, their experiences are serious and they are valid?” Gupta said.

At the town hall, the IVP committee explained their initiative to increase transparency about these issues through publishing infographics. One of these proposed infographics includes a model SJP case that goes through the process of reporting and investigating a sexual assault case. According to the IVP, this graphic would help to clarify some of the factors and complexities involved in this process.

Baker said that STRIVE is aiming to educate more people about these issues in an effort to improve conditions for survivors on campus.

“I think we still culturally have this image of [sexual assault as] this man in a mask in a dark alleyway but that's not necessarily true,” Baker said. “It can be anyone of any gender in your classes, in your room, and so I think we just need to continue humanizing this issue.”

Wickerson said they hope the timing of the results can lead to productive discussions going forward as well.

“It’s interesting to see this data set come out after everything that happened in September,” Wickerson said. “Maybe this data is a way to center that focus [and] provide legitimacy to the concerns that people have raised but also add new questions.”

Gorman said in the town hall that participation in the AAU survey is part of Rice’s ongoing effort to reduce sexual violence on campus.

“By doing the AAU, it was a substantial investment for us to do it but this is money well spent,” Gorman said. “It gives us a good overview of our campus climate and where we are right now. It gives us a reference to reflect back on over the past four years from the last time we did one of these [surveys].”

Gorman said that Rice will more than likely participate in future surveys as well.

“Our intention would be to participate again the next time that they do a round of this [AAU survey], which I’m assuming will be probably about four years from now,” Gorman said. “After we did the SUSE in 2015 we always intended to have follow-up to that and a four year time frame is actually a good gap because it gives us the opportunity to have an entire cohort move through Rice.”