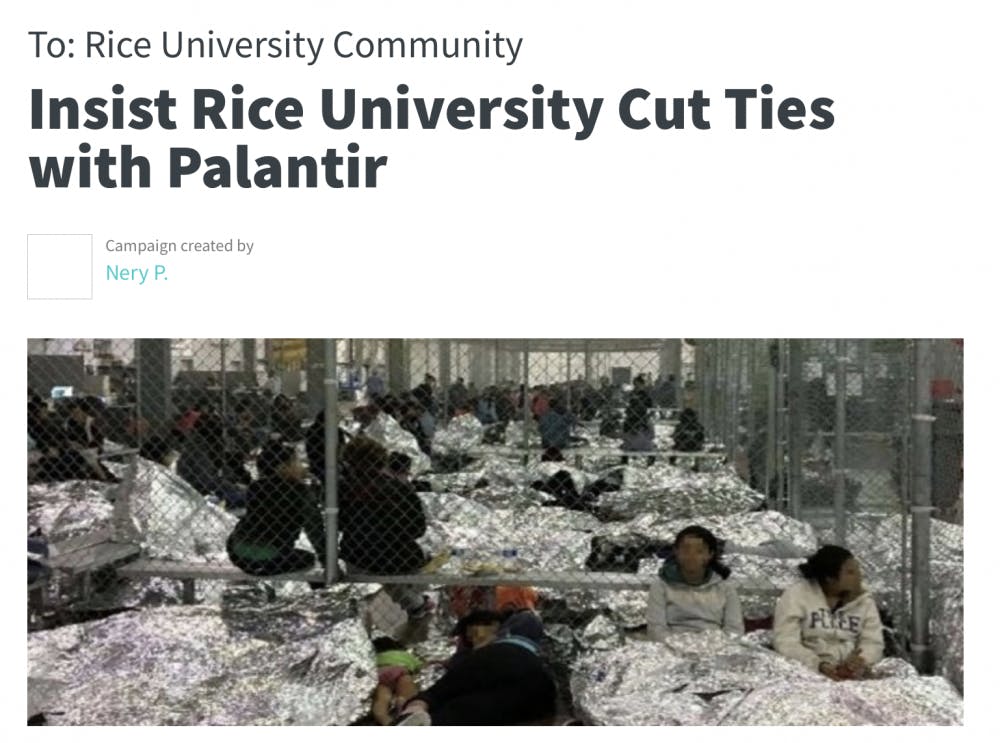 More than 150 Rice University community members have signed a petition urging the department of computer science to drop Palantir Technologies from a computer science mixer event on the evening of Oct. 10, due to contention over Palantir’s ongoing contracts with U.S. Immigrations and Customs Enforcement.

Hanszen College junior Nery Perez, the author of the petition, said they learned about the  mixer from a friend who received an invitation through the computer science Listserv.

“They told me there should be a protest at this,” Perez said. “I agreed and in an effort to prevent the company from ever even coming to campus, I followed the footsteps of several other petitioners on Mijente’s website.”

“We love, respect and care about our alumni, and we are grateful that they are traveling all the way to Houston to see us, celebrate with us and tell current students about job opportunities,” Nakhleh said. “In doing so, we are neither endorsing any company nor telling our students which companies to work or not to work for.”

“However, our goal in teaching ethics is not to tell students which companies to work or not work for; our goal is to educate them to think for themselves and to make ethical issues part of their decision-making process,” Nakhleh said.

Nakhleh said that individual students can make decisions regarding companies.

“Knowing full well that our students care about ethics, we are confident that they will make the right choices, each according to his or her core values and, hopefully, using the reasoning we teach them,” Nakhleh said. “And, if some don’t, there is always room for respectful disagreements.”

Prior to the mixer, Rice alumni who are working at Palantir will also be hosting an information session, according to a Facebook post made by Shelby Bice (McMurtry College ‘19).

“I know there has been some pushback against Palantir recruiting on campus, and we invite anyone who would like to learn and discuss why Rice alums have chosen to work at Palantir, what we actually work on, and the mission of Palantir to attend the info session,” Bice said.

Pranay Mittal, a Wiess College sophomore, said that Palantir should be allowed to visit campus.

“I don’t in any way condone or support Palantir’s work with ICE,” Mittal said. “But if Rice students will start protesting companies that do some highly unethical things and some ethical things, why don’t we protest Facebook, BP, Chevron, etc.?... Trying to prevent [Palantir] from visiting doesn’t respect people who are interested in Palantir for catching child molesters or preventing credit card theft.”

Perez said that they believe that Palantir’s contracts with ICE are inexcusable regardless of other work they do.

“To everyone that signed the petition or supports it, uninviting Palantir is the logical and humane thing to do,” Perez said. “Palantir may be doing some good things, but it doesn’t excuse their work with ICE.”

According to Perez, two protests are going to be held, one at the Palantir information session and one at  the CS mixer. Perez said students made signs in the Baker commons on Tuesday  night.

“Hopefully this [protest] will convince Palantir to not show up,” Perez said.