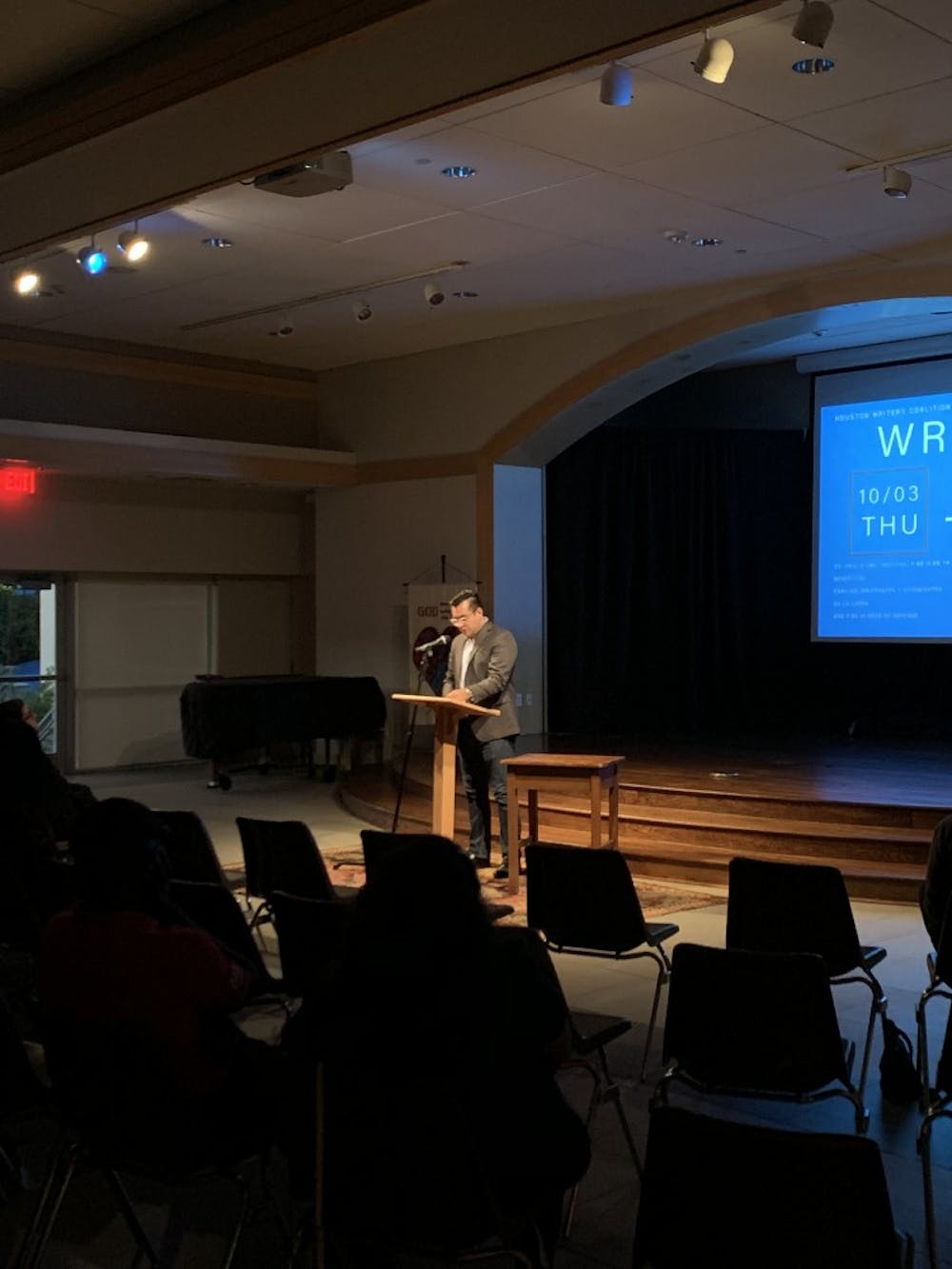 This past Thursday, gauzy black curtains were hung to transform a children’s Sunday School room where over 30 Houston-based writers took to a gleaming wooden podium for a night of literary activism. With a suggested $10 donation for all attendees, “Writers for Families Together - Houston” was the second event in a month to raise money for organizations aiding immigrant families facing human rights violations at the Texas-Mexico border.

The marathon reading, which took place at St. Paul’s United Methodist Church, was a resonant sequel to Houston’s “Writers for Migrant Justice” reading, a nationwide event that took place in 40 cities in September to benefit Immigrant Families Together.

Daniel Peña, assistant professor of English at the University of Houston-Downtown and author of “Bang: A Novel,” is a member of the Houston Writers Coalition, the group that organized the consecutive readings.

“In the arc it takes you from thinking about standing up to actually [standing up] for something, you give other people permission to do the same thing,” Peña said. “We say we’re verging on fascism, but we’re sort of full tilt going toward fascism ... it’s important that we stand up not only to show [those persecuted] that it’s safe to do so as well, but also to show our peers that, hey, this is the right thing to do.”

The presence of dozens of attendees and more than 30 readings attest to Peña’s sentiments. While some writers read original work, such as Josh Inocéncio’s excerpt from his play “Chocolate Gravy & White Jesus,” others tapped into the canon of literary giants such as Pablo Neruda, Erika L. Sánchez, Ocean Vuong and Houston’s own Gwendolyn Zepeda.

Each reader was allotted three minutes, and everyone filled their time with lilting poetics, prose and even song, switching fluidly between English and Spanish. Former University of Texas, Austin Spitshine slam poetry champion Loyce Gayo dissected the language of violence brought about by colonialism and nation-building. Local poet Ryan McMasters later read his own erasure poem created from the United States immigration law. Then, National Poetry Award winner and creative writing teacher Natasha Carrizosa left a pregnant pause as she read from her book, “Crown.” Her reason: “I lost my place thinking about my Black mother who loved a Brown man.” All the while, one could hear children giggling and playing on the other side of the makeshift gauze wall.

Robin Davidson, a professor of English at the University of Houston-Downtown and former Houston poet laureate, is also a member of the Houston Writers Coalition. As a translator herself, the multilingualism of the readings spoke deeply to her.

“[The readers] didn’t apologize for speaking or reading in Spanish,” Davidson said. “[We] have to learn the language or appreciate multiple languages. How will we ever be ambassadors of peace in any way if we can’t have multiple languages and share in the cultural experiences related to understanding other languages?”

One hundred percent of the donations from Thursday’s reading will go to the Houston-based organizations Kids in Need of Defense and Familias Inmigrantes y Estudiantes en la Lucha.

Speaking to KIND’s work, Peña said that kids bear the brunt of the Trump administration policies regarding family separation.

“The Kids in Need of Defense fund [has] the best results in terms of getting kids asylum, making sure that kids are united with their families, and just supporting children and minors who are in deportation proceedings here on U.S. soil,” Peña said.

Davidson said that the Houston Writers Coalition has already received multiple requests for a third gathering. In part, Davidson said, this urgency of literary activism is due to Houston’s critical position near the Texas-Mexico border. The readings have spoken to a long history of activist literature examining the border culture and politics, such as Gloria E. Anzaldúa’s famous book “Borderlands/La Frontera: The New Mestiza.”

At Thursday’s reading, the audience was amused when an Apple lock screen, accidentally projected on the wall, read: “Don’t panic.” While it grew to be a joke, laughingly called out when a reader tripped over the microphone stand, Lupe Mendez, emcee and founder of Tintero Projects, repeatedly invoked the phrase with conviction. As readers shared narratives of grief and resilience, all those present were reminded to “not panic,” but keep speaking truth to power on behalf of immigrant families at the border.

Disclaimer: The author completed an internship with Phuc Luu and Kate Williams of Bloomsday Literary, who were both a part of the Houston Writers Coalition. The author still does freelance work for Bloomsday.