From I-PREP to graduation: the international student experience 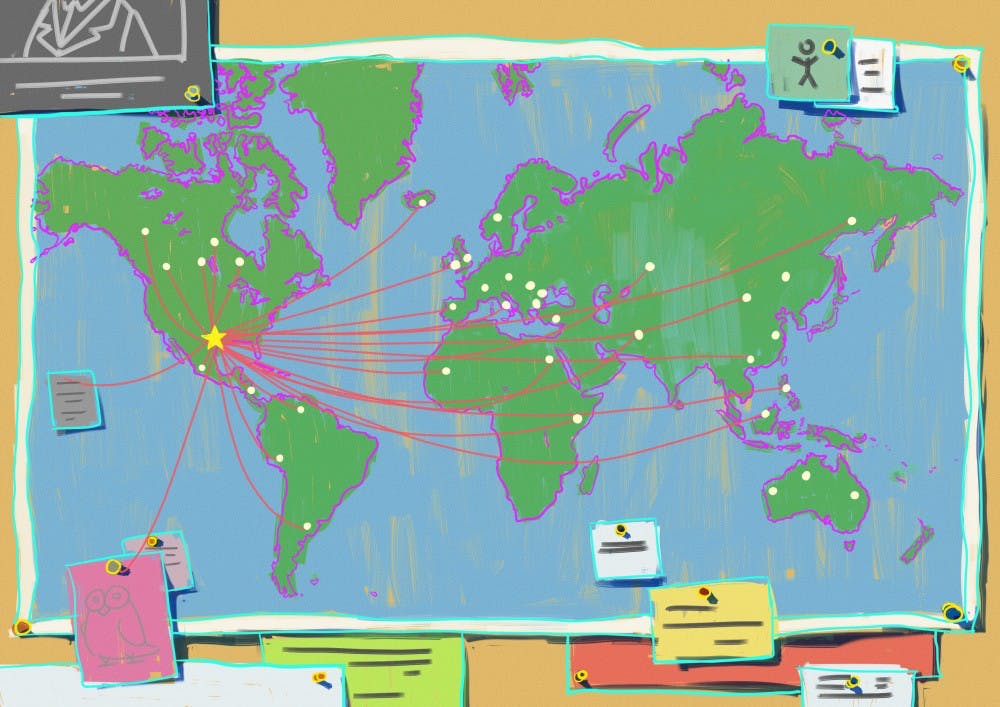 Being airdropped into a foreign country to fend for yourself may sound like the stuff of spy movies. But for 11.4 percent of Rice’s population, it’s just life as a college student.

This article follows the journey of six international students and one exchange student; from choosing Rice to International-Preparation and Regulatory Education Program and Orientation Week, and through their freshman year, these students had a lot to say about life in the United States.

Like all students, international students come to Rice for different reasons.

Matheus Barbosa, a Brown College sophomore, found that Rice offered him better opportunities than in Brazil, where he’s from.

“I was looking for studying abroad because for internal reasons in Brazil, the sciences specifically [in] my area [are] not doing as well,” Barbosa said. “The new government doesn’t invest as much as the previous one in science and technology.”

Becky Shepherdson, an exchange student from the University of Cambridge, said she appreciated that U.S. school systems allow students to major in more than one area.

But for Wei-Lin Hsiao, a Duncan College junior from Taiwan, the U.S. offered an alternative to the dynamics at home.

“My parents have been telling me that I need to get out of Taiwan just because they’re worried about the political situation there,” Hsiao said.

Coming To the United States

When choosing Rice, many students had preconceptions of what the U.S. or Texas would be like. Stephanie Kwak, a Lovett College junior from South Korea, said she had heard about Southern hospitality.

But not all preconceptions were as harmless as cowboy boots and accents. Tona Akerele, an international student from Nigeria who grew up in Ireland, said her time at a U.S. embassy school in Nigeria played a part in her negative views on the U.S.

“I don’t think I ever experienced racism in Ireland,” Akerele said. “Then I go to this school in Nigeria, literally my parents’ home country, and we’re all black, and I have these American teachers, and they’re the ones teaching me about racism. I thought the U.S. was racist.”

Although she knew of some stereotypes, Marta Cano Miñarro, an international student from Spain, came to Rice with an open mind.

“I just wanted to start building my memories here without any stereotypes,” Cano Miñarro, a Brown sophomore, said.

All international students participate in I-PREP, a program before O-Week coordinated by the Office of International Students and Scholars. For many students, I-PREP is their first time in the U.S.

“I flew from Brazil direct to I-PREP,” Barbosa said. “I haven’t been here [in the U.S.] before for any longer period of time than half a day.”

According to Student Success Initiatives, I-PREP serves as a time to review immigration regulations and legal information, as well as assist students with the logistics of moving in.

“It was really helpful because ... I didn’t have a bank account,” Shepherdson said. “I didn’t even know Chase was a type of bank. Things which I think a lot of people take for granted are just not common sense at all.”

For Kwak, however, some time during I-PREP could have been spent better.

“Cultural stuff was really weird,” Kwak said. “They taught us slang, so like, ‘Oh, you slayed girl’. You guys [are] really just spending an hour to teach us about this stuff?”

The three-day program led to some interesting dynamics, according to Yvonne Chien, a sophomore from Taiwan who went to school in Singapore.

Several students, like Shepherdson, said they still maintain their connections from I-PREP.

“It was really nice to turn up having done I-PREP and then at least you have people who you know,” Shepherdson said. “You have inside jokes with them, you’ve done the same stuff already, so you do have some kind of bond internationally.”

Despite some help from I-PREP, many international students said they found the transition to O-Week challenging. Shepherdson, who was in charge of her university’s orientation, said O-Week highlighted major cultural differences between the U.S. and the U.K.

“I was expecting way more bitching and sarcasm and ‘Oh, why do we have to do this,’” Shepherdson said. “I found people here were just a lot more up for everything in a very enthusiastic way.”

“Maptek I think is probably the best example,” Shepherdson said. “You could not force a group of 18-year-old Brits, sober, to do anything that we did that night. Not at all.”

Since Cano Miñarro came to the U.S. speaking a medium level of English, she said the language barrier affected her, especially during icebreakers.

“I just felt so young,” said Cano Miñarro. “I felt much younger than I actually was because you’re in that learning process. You’re learning 24/7.”

For Akerele, language wasn’t the reason she was more reserved.

As an international student, life at Rice can come with a host of difficulties.

Kwak said her first year was the hardest because those interactions were her first outside of Korea.

“[In Korea], I was really outgoing,” Kwan said. “I would be the one who initiated the conversations. But the freshman year was like, I can’t do the talking. English is so hard.”

According to Akerele and Hsiao, many international students feel that they focus a lot more on education than their domestic counterparts. Hsiao said that his F-1 status, which allows him to stay in the U.S. on a student visa, has played a role in this tendency.

“I was very focused on academics and careers and jobs especially because I’m trying to stay here in the U.S. after I graduate,” Hsiao said.

According to Cano Miñarro, being an international student led to higher scrutiny in many situations.

“I felt like a lot of people wanted to help me, and that was pretty nice like ninety percent of the time,” Cano Miñarro said. “The other ten percent, you feel absurd because everybody is trying to help you so much that they’re observing you to see if you’re doing things right.”

Chien, on the other hand, said being an international student didn’t play too much of a role in her interpersonal interactions.

Faced with a new culture and a new environment, international students can find themselves overwhelmed by the cultural differences between their home country and the U.S.

Hsiao said he found the fast-paced culture surprising, especially compared to his experiences in Taiwan.

However, Shepherdson said that her experience in America isn’t so different from life in the U.K.

“The same kind of patterns of generally what it’s like to be a teenager I guess is a really ubiquitous experience,” Shepherdson said.

According to Hsiao, navigating stereotypes of international students added an additional burden to this identity crisis, especially when he found that being Taiwanese had become a larger part of his identity.

Akerele originally joined the African Student Association, but later found that RISA was a better fit because of the experiences she shares with other international students.

“I get along well with African people ... but at the end of the day, international students, we all have shared common experiences with visa and stuff like that and just finding employment, and our experiences like culture shock and transition,” Akerele said.

For Chien, who has lived in several cities in Asia, identity hasn’t been as clear-cut for her as it is for other people.

“[Students] would have one place they identify with and then that would be their go-to answer,” Chien said. “For me personally, because I’ve had the opportunity to move around, it was slightly harder for me to identify a place that I belong to or strongly identify with.”

Hsiao found that living in different places has given him insights more broadly into the human experience.

“The definitions of what a person should be like, what is masculinity, what is the role of adolescence, of like childhood and growth and learning, all those, you kind of see those from two different ways and it kind of gives you a new perspective that says hey, all this stuff is kind of made up,” Hsiao said.

Hsiao said his experience as an international student has helped to shape his identity.

“You can kind of pick and choose and say this is what I want to be,” Hsiao said. “Sometimes it’s going to be pulled a bit more from Taiwanese influence or a bit more from the American side. So you get a very good perspective of paths in life and what you want to be as a person. I feel like it’s the biggest cultural benefit I’ve had.”