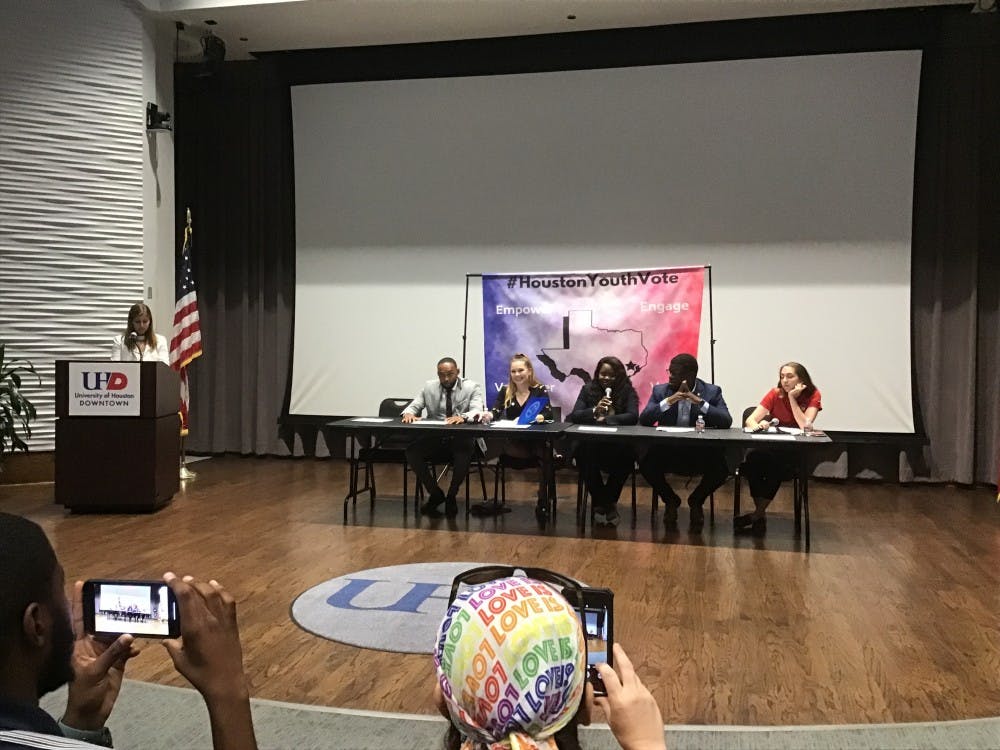 On a panel of college student government presidents, Rice SA President Grace Wickerson championed the success of Turbovote — an application that streamlines the voting process — in registering students to vote and pledged to empower student civic participation.

“At Rice, we have a large population of students who are out of state, so for them, if they want to vote back home, there’s not many places they can do that,” Wickerson said. “I think Turbovote is really great in that regard ... we got about 558 students on the platform.”

Lina Hidalgo spoke on how young people can be drivers of change, citing her own experience as Harris County judge — an executive position tasked with overseeing Harris County’s governing body. As the second youngest county judge in Harris County history, as well as the first female and first Latina judge, Hidalgo told the audience that it is not age, but the willingness to ask why, that makes for great advocacy.

“The people that had been in politics for ten, twenty, thirty years saw it as a position that only dealt with roads and bridges,” Hidalgo said. “They didn’t realize that in controlling the budget they could do so much good.”

Hidalgo also highlighted the changes that have made Harris County government more transparent, shifting from 15-minute to one-hour long council meetings consisting mostly of contractors to eight-hour sessions involving the community when deliberating infrastructure changes. She points to this increased involvement of the community when addressing the issue of flooding.

“It used to be scary for folks to mention the issue of climate change,” Hidalgo said. “It never came up or was uttered in county government, which meant we couldn’t use the best science to talk to developers and really regulate the way we grow.”

Harris County Clerk Diane Trautman spoke on her work implementing countywide voting for the May 2019 elections. She said that before this change, voters could only vote at their designated polling location, forcing 2,500 voters to fill out provisional ballots after arriving at the wrong ballot, a figure that doesn’t include voters who showed up to an incorrect polling location and simply gave up and left.

“So basically thousands of voters were denied their right to vote in that election and other elections as well,” Trautman said. “And for the first time in the third largest county in the nation, voting on Election Day did not hinge in having to cast the ballot at a designated polling location.”

Trautman also shared that while she was a trustee-at-large on the Board of Education, she noticed that many voters didn’t vote all the way down to the bottom of the ballot where the school board races and other local races were tallied.

“Sometimes questionable candidates would get into these positions without even trying because voters wouldn’t vote all the way down the ballot,” Trautman said “When I complained about it to my friends, they said the only way you could change this is to educate voters about the importance of local races.”

Several organizations were present at the conference — Houston Peace and Justice Center, Children at Risk, Young Invincibles, March for Our Lives and Mi Familia Vota — as well has two Rice organizations, Deeds Not Words and Hispanic Association for Cultural Enrichment at Rice. Attendees could also choose to attend one of the four policy breakout sessions — equitable disaster recovery, transportation, gun legislation and “We the People: Our Role in Politics”.

Diana De La Torre Pinedo, Baker College junior, attended the event and volunteered for Civic Duty Rice. She said that hearing the leaders speak was a valuable experience, stressing the importance of civic engagement in translating ideas into action.

“Something that I’ve seen throughout the year is that people have become a lot more socially aware, we have seen students take more action about issues that they’re passionate about,” Pinedo said. “Understanding community organizations matters. I think Rice is getting better and getting more involved, but they do need to commit to stuff like this.”