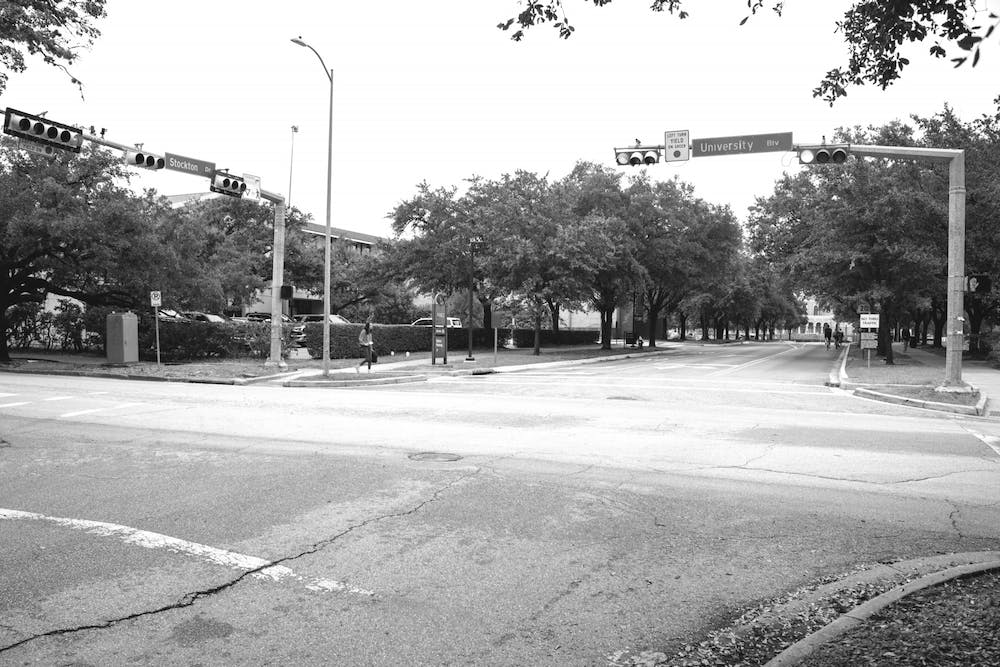 In an auto theft near campus on Oct. 22 that did not involve any Rice students, a woman was robbed of her car after a minor accident on a section of University Boulevard near the Rice University Police Department building.

At 3:30 p.m. last Tuesday, a driver was heading west on University Boulevard when her black Subaru Forester was struck from behind by an unidentified silver sedan, causing her to steer onto Stockton Drive to assess the damage, according to an RUPD mass email.

As she stepped out to examine the rear of her car, one passenger from the silver sedan rushed into her Forester and took off southbound down Stockton, while the other two suspects fled in their silver sedan, speeding westbound toward Rice Village, according to RUPD Captain Clemente Rodriguez.

“She wasn’t harmed in the incident. It was just a crime of opportunity by her getting out of the vehicle and the vehicle being on, the passenger was able to just jump in and take it,” Rodriguez said.

In an event that Rodriguez imagines would have lasted less than a minute, the victim became stranded on Stockton Drive until a passerby picked her up and flagged down an RUPD officer, who brought her to the RUPD station. Since the incident occurred on a city street, Rodriguez said, Houston Police Department officers were dispatched to take the victim’s statement and draft an official police report.

“It wasn’t a Rice student or anybody who’s affiliated with Rice. They were just passing the campus when the accident and theft occurred,” Rodriguez said.

As the HPD officers were driving the victim home, they learned that the vehicle had been recovered on 7300 Tours St., 10.4 miles from the scene of the crime and approximately 24 minutes away, according to HPD spokesman Kese Smith, who said he suspects that the vehicle was driven for a short time and then abandoned. Smith said the perpetrators could not be apprehended, and warned that the suspects remain at large.

“We met her at RUPD, took her statement and then we were driving her to her home, as a courtesy ride, when we learned that her vehicle had been recovered, so [a] relatively short period of time,” Smith said. “Unfortunately, the three suspects remain at large.”

Rodriguez suspects that relatively few drivers were wary of the two pulled-over cars on the side of Stockton Drive, a quiet residential street. As a result, the victim, who left her phone in the stolen car, wasn’t able to file a report until the officer who was physically notified brought her to the RUPD station at 3:50 p.m., according to Smith.

In similar past incidents – none on Rice campus – perpetrators of auto theft have instigated minor accidents to lure unsuspecting drivers out of their vehicles before either robbing the driver or stealing the vehicle, according to Rodriguez, who added that these stolen cars are either stripped for their parts or used for other purposes and dumped. In this instance, HPD was unable to determine the use of the vehicle, just that it had been left shortly after the incident.

To safeguard against auto theft, Rodriguez suggests remaining in the vehicle after a light accident until an officer arrives.

“If someone is ever involved in an accident and they don’t feel comfortable, they should call for a police officer to come to the scene and they can let the other person know ‘I’m calling for an officer to come to scene,’” Rodriguez said. “If they do feel like it was a legitimate accident and they’re going to get out of the vehicle they should always keep their keys with them [and] secure their vehicles.”

As the incident occurred near Entrance 8 of the Rice campus, Rodriguez hopes to install security cameras adjacent to campus entrances, a measure he explains would help future investigations.

“If we can get that done in the future that will be another tool we can use to possibly investigate when these things happen ... and we can share [it] with the HPD,” Rodriguez said. “If we see some folks that are pulled over or even if it’s a minor accident, [we can] check on them.”