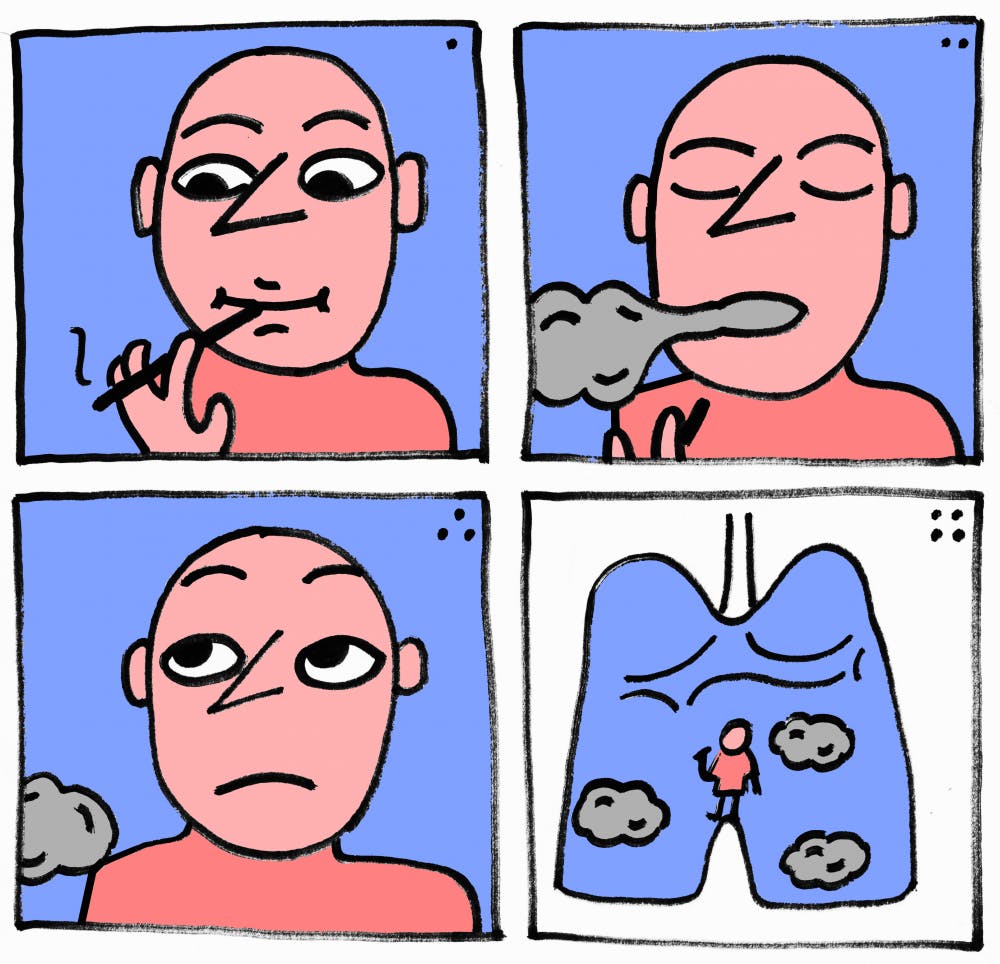 Amid the ongoing investigation by the Center for Disease Control into the outbreak of lung disease and its ties to vaping, Dean of Undergraduates Bridget Gorman sent an email to the magisters directing them to pass on information warning students of the possible health risks of electronic cigarette use.

As of Sept. 11, the CDC had received 380 reports of lung illness cases and six related deaths. All reported cases involve a history of vaping.

“I was talking about this with some members of my staff and I just said, ‘As much as I like to think that our students are all plugged in and paying attention to the news, there are probably some that are not,’” Gorman said. “I don't see a ton of students vaping when I walk around campus, I don't see a ton of students smoking cigarettes when I'm walking around campus. I also understand it's probably things you're doing when you're drinking, and doing when you're partying and so those are obviously going to be outside of my eyeline.”

Gorman’s email to the magisters asked them to disseminate the information, but the specific method was up to the individual magister’s discretion, according to Gorman.

According to Brown College Magister Shirley Fregly, the message was delivered at Brown by the college’s chief justice, Charles Davis. Davis, a senior, sent an email to the Brown Listserv after receiving an email from Fregly.

Gorman elected not to send out a campus-wide message from the Dean’s Office.

“I worry that if you get too many messages from me in too close a time, you won't read them,” Gorman said.

According to the director of the Student Wellbeing Office, Timothy Baumgartner, much of the concern around vaping is centered on the possible addition of contaminating adulterants to e-cigarette cartridges, especially those made for dab pens, which contain an oil-based form of marijuana. Baumgartner said this adulterant theory is fairly accurate.

“There's some off-market stuff that's out there in what they're using to cut it,”” Baumgartner said. “A lot of the time what they mix with the drug is more damaging than the drugs.”

While the email did not require him to take formal action regarding vaping, Davis said he decided to spread the word to his classmates on a personal level.

“If I see someone [vaping] I might suggest, ‘Hey, I don't know if you're aware of this, but this is becoming an issue,’" Davis said. “And as far as vaping on campus is concerned, you're not supposed to be doing it in buildings anyway. So if I see it at Brown, I'm going to tell them, ‘You need to go to one of the smoking areas.’”

At the same time, Davis said it is up to individuals to make their own decisions.

“It is a lifestyle choice and I feel like as far as the issue goes, if they want to continue doing it that's on them,” Davis said. “But they should know that it could lead to these very hazardous effects.”

According to one senior undergraduate student, who was granted anonymity, information might not change people’s minds about vaping.

“I don't think anyone who Juuls thinks its a good thing, and I don't know, there's a couple of people who are like, ‘Oh yeah, it's so bad for me,’ and then they just keep on Juuling a lot,” she said. “And there are some people who are like, ‘Yeah, it's bad for me,’ and then they quit. I just started over the summer knowing that it was bad for me, but I also know that I go through pods at a snail's pace. It's why I still feel okay doing it.”

She said that the ease of using vaping devices may be linked to its popularity among students.

“It's just an interesting culture of when you hang out with people, it's such an easy thing to do,” the student said. “You don't have to roll anything, you just have your own personal device and you can hit it whenever. I think that's pretty dangerous.”

Her distrust of tobacco companies is at the heart of her hesitation to believe the recently released research regarding vaping.

“I think a lot of the vaping community just thinks that the reason that the investigations are coming out now is maybe less to do with the findings themselves, and more to do with the fact that the cigarette companies are really trying to go after Juul in order to have the media take them down,” she said.

When it comes to dab pens, which contain THC, she said is more convinced by the research to change her usage.

“If there were investigations that came out that were so jarring to me, I guess I would probably [stop vaping],” she said.  “It's more of like a convenience of getting a buzz. But when I read the dab pen thing, I was like, ‘Okay cool, I'm not going to [use a dab pen] that much.’”

The administration does not have plans to take formal action at this time, according to Gorman.

“I'm not getting super heavy-handed with it yet. We're just going to see how this all plays out,” Gorman said.

Instead, Gorman said she will focus on prevention and informing students of the possible health risks. She also said that she expects there will be a follow-up during the monthly meeting with the magisters to discuss the conversations being had at the colleges, as well as the magisters’ observations on the prevalence of vaping on campus. Additionally, both the Student Health Center and the Wellbeing and Counseling Center will ramp up messaging around the health risks of vaping.

For students skeptical about the research findings, Gorman, whose academic expertise is health disparities, said students should consider the reasons behind these new cases of lung disease and why this particular age group is being affected.

“People often dismiss a connection,” Gorman said. “Well, then you tell me what else has changed in the same period of time that could be a culprit. The commonality among all these people is that they're vaping.”

Associate Dean of Students Allison Vogt said that it is important for students to put their health first and to contact the appropriate people.

“If you are wheezing or experiencing any respiratory distress, make sure that you tell [Rice Emergency Medical Services], or the hospital, or urgent care or here at Student Health Services that you've been vaping, because that's a much different set than us trying to treat bronchitis or asthma,” Vogt said.

Baumgartner said he had been skeptical about vaping itself prior to the CDC investigation.

“I don't trust vaping companies. I don't believe they tell the truth on what they know,” Baumgartner said.

Baumgartner cites the claims that vaping is safer than smoking as a reason for his distrust.

“Even if they found a couple studies that might suggest that, those studies in this kind of stuff, unless you've got repeated studies that demonstrate the same effects over time, it's just way too early to make those kind of claims,” Baumgartner said.

According to Baumgartner, students have the power to change the culture around vaping.

“Rice students listen to other Rice students more than they listen to anybody else,” Baumgartner said. “I would hope from a culture of care, if people are watching folks go out and vape, they would be willing to say something like, ‘You have heard what's going on right? Just want to make sure you're aware of that when you're making this decision.’”

In the end, the administration hopes that students will make informed decisions about their health.

“Follow the one piece of advice that President [David] Leebron gave you at matriculation: ‘Don't do stupid stuff,’” Baumgartner said.