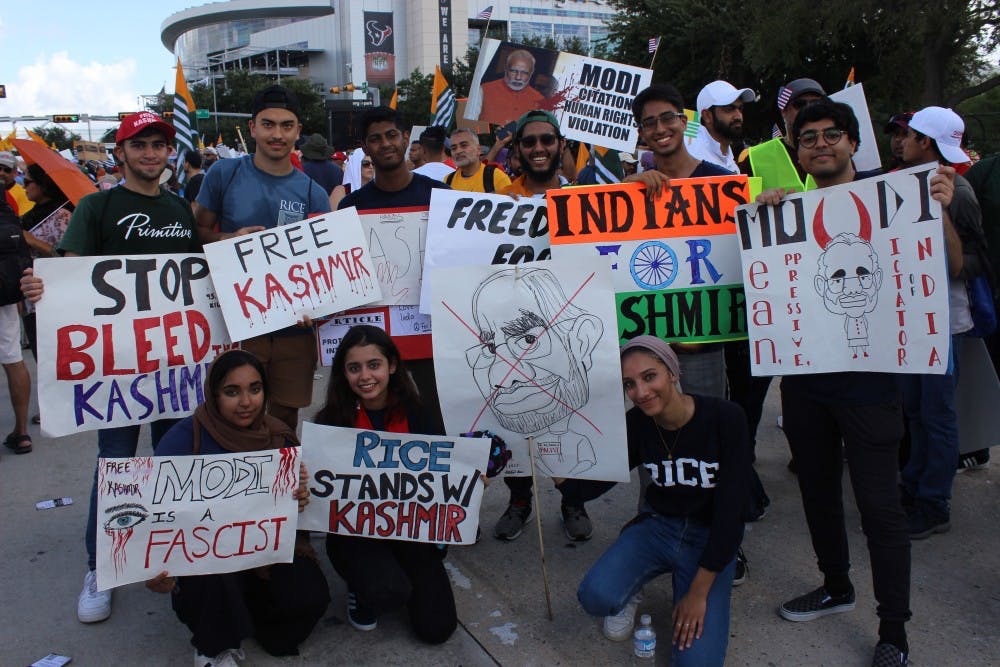 On Sunday morning, multiple Rice students joined thousands of attendees at a rally held for Indian Prime Minister Narendra Modi and President Donald Trump, while several other Rice students attended a protest outside the event, which was held at NRG Stadium.

Modi spoke about the recent events regarding the Jammu and Kashmir region, which has been the subject of a dispute between India and Pakistan and the major focus of the protests attended by Rice students. Modi’s speech came less than two months after the decision to revoke Article 370 from the Indian Constitution, withdrawing the special status conferred on the Jammu and Kashmir region.

Article 370 had provided Jammu and Kashmir with special rights to legislate and other forms of autonomy. Before withdrawing this special status, India had sent thousands of troops into Jammu and Kashmir, cut off internet services and placed political leaders of the region under house arrest.

Jiya Ghei, a Wiess College sophomore who attended the event, said that this wasn’t the first time Trump tried to gain the support of the Indian American voter base, but it’s definitely the most successful he’s been.

“Trump and Modi made very similar points in their respective speeches, and I think we witnessed a pretty strong friendship forming — they literally walked out holding hands,” Ghei said. “Personally, I think a lot of his border rhetoric mirrors Trump’s, which is one of the reasons he’s a polemic figure.”

Around a dozen Rice students attended the protests held outside NRG stadium. Fadeel Khan, Daanish Sheikh and Alizay Azeem were among the students in attendance at the protest. Khan and Sheikh said they heard about the protests through the Muslim Student Association.

“I’m an international student from Pakistan, so I’ve grown up looking at everything that’s been going on between Pakistan and India,” Khan, a Baker College freshman, said. “I was always passionate about my country but I was more passionate for all the humanitarian reasons, and I wanted to use my privilege for the good.”

Shryans Goyal, a Will Rice College junior from New Delhi, India, said that Modi should have put the people of Kashmir first, and started by building trust.

“The way [Modi] did it was he kept everyone in the dark about what was going to happen in Kashmir and then put this curfew in place, and did not allow communications,” Goyal said.

With regard to the region of Jammu and Kashmir, Arav Singhal, a Will Rice sophomore from India, said Modi’s decision was reasonable and logical.

Alizay Azeem, a freshman at Wiess, said that she doesn’t think the situation in Kashmir is getting sufficient coverage.

“Growing up in a Pakistani household, I did know about it,” Azeem said. “Especially with recent events — there’s been a lot of media blackout and lack of access to healthcare [with the] government crackdown in the area.”

Azeem says that Rice students from the Muslim Student Association started chants when they found it slowing down. Chants included “Rice for Kashmir” and “Hey hey, ho ho, the occupation has to go.”

Trump said that he looks forward to working with Modi.

“India and the United States understand that to keep our communities safe, we must protect our borders,” Trump said.

Modi and Trump also spoke about India-US relations. Trump said that people are prospering like never before, in both India and the United States.

“Indian culture is woven into the fabric of our state,” said Cornyn.

Stephen Klineberg, founding director of Rice University’s Kinder Institute for Urban Research, and a professor at Rice University’s Department of Sociology, says that the growth of the Asian population in the United States, especially in Houston, is due to children of immigrants of 25 to 30 years ago, who still retain deep connections to their countries of origin.

“And the other phenomenon is that we are falling in love with each other, marrying, and making multi-racial babies,” Klineberg said.

Klineberg said that Houston has benefited enormously from the growth of immigrants in the city.

“Houston, throughout all its history, was a biracial, Southern city, dominated by white men, and in the last thirty years, has become the single most ethnically diverse major metropolitan area in the country,” Klineberg said.