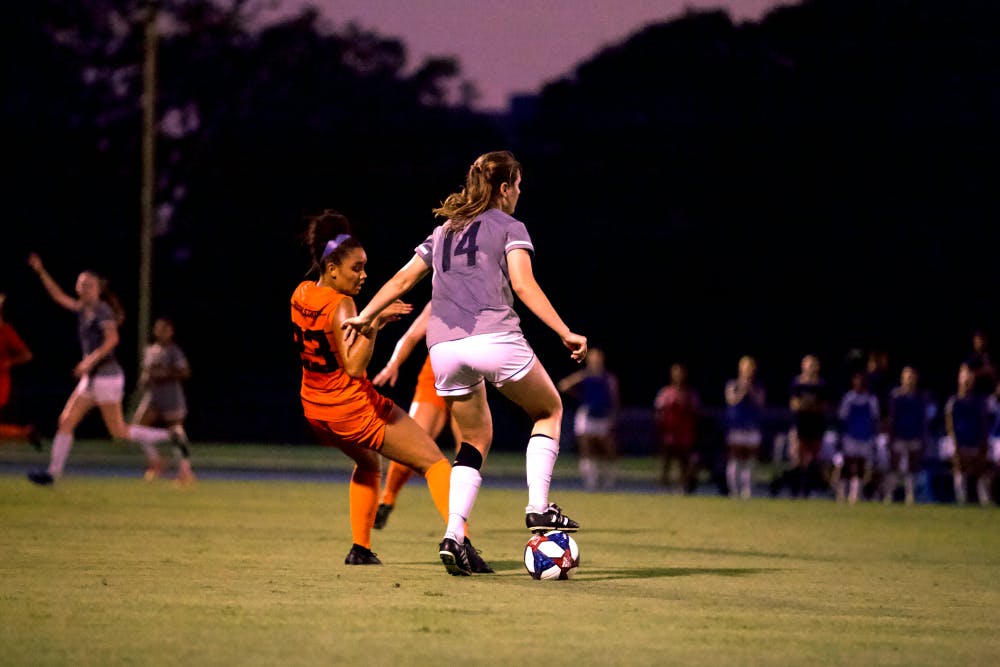 Rice was coming off of a 3-2 defeat at  Southern Methodist University, while Oregon State came into the game following a 5-0 victory against the University of Houston and had given up only one goal all season.

“Obviously it was a very big opportunity,” junior defender Callie Ericksen said of her collegiate debut. “In the end, it didn’t go [the way] we wanted.”

Rice kept up with Oregon State throughout the first half by maintaining possession. The Owls were also able to keep the ball in the middle of the field and not let OSU get around their defense on the outside.

Only three shots were placed on goal in the first half: one for Rice and two for Oregon State.

However, as the second half started, OSU came out playing aggressive offense and sent multiple crosses into the box. After a few failed corner kicks, Oregon State was able to capitalize on an attacking opportunity in the 56th minute.

On an OSU throw-in into the Rice penalty box, the ball was kicked around in traffic and appeared to cross the goal line before being kicked back out by a Rice defender. After a moment of confusion, the referees signaled it a goal.  Rice head coach Brian Lee said he was happy with his team’s resilience after OSU’s first goal.

“To have that first goal go against you, and then still have the stick-to-itiveness to come back all the way through the full 90 minutes, really speaks to the kids’ character,” Lee said. “The important part is how we react to [the setback], and I thought we really stayed calm and kept playing and playing.”

Immediately following the goal, Rice went on the offensive. The Owls had four corner kicks in the span of five minutes but were unable to convert any of those scoring opportunities.

Rice continued to control the ball into the 88th minute, when the team got its best scoring opportunity of the night thus far.

Senior midfielder Lianne Mananquil brought the ball up the right side of the field. After receiving the cross from Mananquil, sophomore midfielder Delaney Schultz headed the ball off of the post. Upon corralling the rebound, senior forward Louise Stephens poked it into the open net for the equalizer goal, her third of the year, right before regulation time expired.

“My first thought was ‘Delaney, please score this,’” Stephens said. “She hit it off the post and then I was in there for the [easy] goal.”

After the first overtime period started, Rice had multiple scoring opportunities and kept most of the possession.

Right away, senior forward Haley Kostyshyn stole the ball and took it near the Oregon State penalty box before being tripped by an OSU defender. The Owls received a free kick, which junior defender Mijke Roelfsema hit off the crossbar. The Owls received a corner kick moments later, which was saved by OSU keeper Bridgette Skiba.

“[Rice] went and continued what they had been doing the last 10 minutes of the game, really pushing for the win,” Lee said. “Soccer is a tough game. Sometimes the ball bounces a little different and we’re able to stick one of those away before they get their chance.”

The Beavers’ chance came in the 99th minute when OSU senior defender Paula Leblic hit a long pass from midfield into the box, and freshman forward Brianna McReynolds was able to chip it in over the keeper for her fourth goal of the season.

It was an abrupt end to an overtime period dominated mostly by Rice, but Lee said he was not disappointed with his team’s performance.

“We love the character and the toughness and the grit of our team,” Lee said. “Individually we’ve had [these traits] all along, and tonight it started to show as a group effort.”

Ericksen said there is more to take away from this game than just the loss.

“Our progression has been impressive,” Ericksen said. “I think that’s something to focus on and be proud of.”

The Owls will look to get back into the win column this week with a pair of home matches. On Thursday at 7 p.m. the Owls play against Texas Southern University. Rice will then face off against the University of North Carolina, Charlotte on Sunday at 12:30 p.m. Both games will be played at Holloway Field.