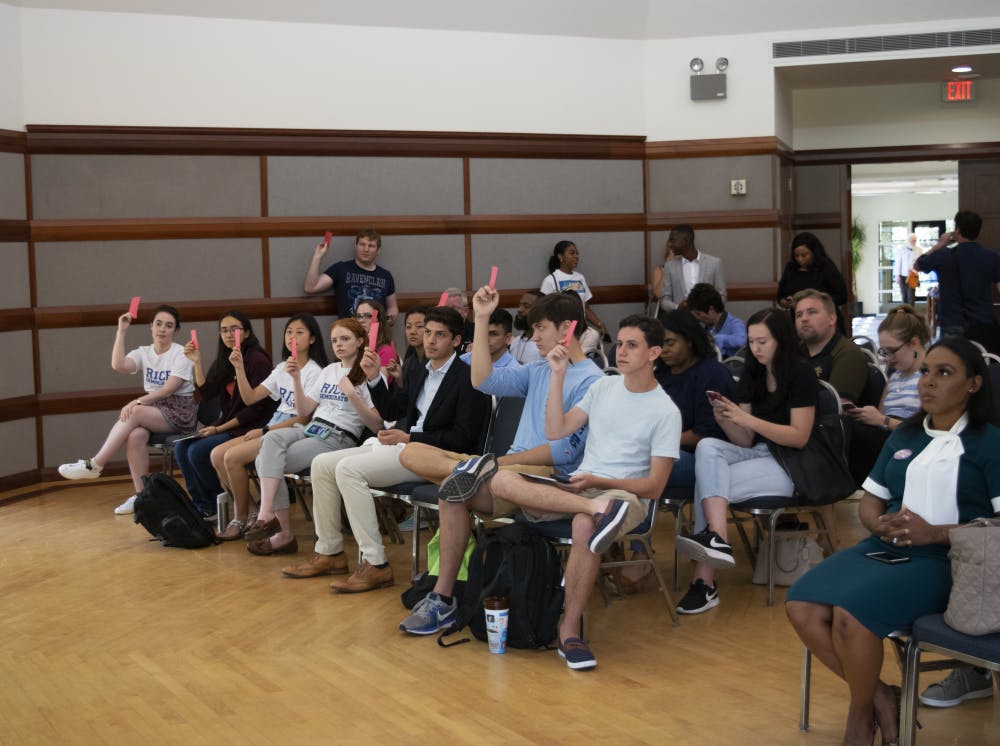 Two days after national attention was focused on Houston for the Democratic debate, the Rice Young Democrats hosted their own event to promote local elections — the races for Houston mayor, controller and the city council — and to decide who should be endorsed by a coalition that includes the RYD.

Mayor Sylvester Turner, who was endorsed at the event, said the importance of the Houston municipal races could not be overstated, citing Houston’s status as Texas' largest city and America’s most diverse city as reasons for civic engagement on Nov. 5 when he said he hopes to see more voters at the ballot box.

“This municipal election is important because whoever is mayor in the city of Houston in 2020 is really gonna have some say,” Turner said. “It's not just about me. Houston in 2019 is ground zero for the advancements we need to make in 2020.”

The Houston College Democrats’ Municipal Endorsement event, held Sept. 14 at Farnsworth Pavilion, was the culmination of months of preparation, with the RYD reaching out to over 40 local candidates, organizing the event in coordination with college democrats from Texas Southern University and the University of Houston-Downtown and ensuring that students at the event could engage with the endorsement process.

“Working with TSU and the University of Houston [in this event] demonstrated the type of solidarity that we're seeing across the country with young people,” Franz Brotzen-Smith, a Brown College senior and former president of RYD, said. “Movements like March for Our Lives have made it clear that young people are not just gonna get involved in politics, but they're gonna get involved in politics working together towards a common cause of making the world a better place.”

Maddy Scannell, president of RYD, said each candidate received a “GPA score” based on their answers to a questionnaire on various issues, which was then used as a recommendation guideline for students at the event to vote on who should be endorsed.

"A big focus of the questionnaire were things that affect college students," Scannell, a Martel College junior, said. "We ask about things such as affordable housing, what the biggest issues facing students are, how to improve education in Houston, but we're also focusing on Rice-specific issues like making biking safer around campus and the innovation district and the gentrification associated with that.”

For District C, which includes Rice, RYD endorsed candidate Abbie Kaman. She said she plans on tackling climate change in Houston, improving safety in intersections – including the one between Sunset Boulevard and Mandell Street, directly north of Rice – and creating a pedestrian plan that will accompany a comprehensive bike plan in the future.

“I'm born and raised here in Houston, but my first day of college was [during Hurricane] Katrina, in New Orleans, at Tulane [University], and that's where I got my start in local politics," Kamin said. “We have issues that the next generation must be taking up in leading the way on. I intend for every single one of you to have a voice.”

Nelvin Adriatico, who was endorsed at the event for city council District J, spoke about the need for student involvement in local politics and the power of the individual, praising the efforts of the RYD in advocating for greater civic participation.

"If you want change, you have to [be] a part of that change," Adriatico said. "Even if you are a single person, going forwards to march for change, you, as one person can make a difference because you’re inspiring other people to follow through.”

Turner also spoke about the need for diversity and inclusivity in the continuation of Houston’s upward growth.

Students will be able to vote in this election on Nov. 5 at the Rice Memorial Center. RYD also plans on organizing carpools to early voting locations, such as Fiesta Mart on Kirby Drive south of campus, where students can vote as early as Oct. 21.