Rice receives part of grant for minorities in STEM 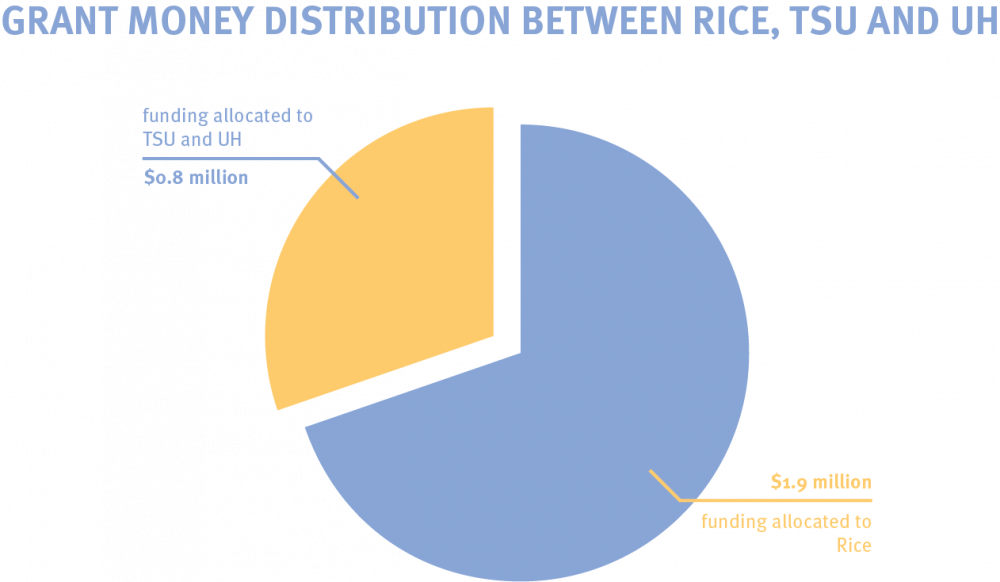 The National Science Foundation awarded a grant of 1.9 million dollars to Rice in August, as part of a collective 2.7 million dollar grant alongside the University of Houston and Texas Southern University to investigate and alleviate the issue of underrepresentation of minority groups in STEM fields.

Reginald DesRoches, dean of the George R. Brown School of Engineering, said that this grant, which has its kickoff meeting next month, is an important step in a long process.

“The goal is to try to increase the number of underrepresented students that go on to academic positions, particularly in the field of computational and data science,” DesRoches said. “Part of [the grant] is also to study what the exact barriers are to those people getting faculty jobs, because we know that they are very much underrepresented in general in academia.”

DesRoches said that increasing the number of faculty of color helps increase the number of students of color who pursue science, technology, engineering and math fields.

“Underrepresented students can see themselves being engineers or scientists when they see faculty of color,” DesRoches said. “We really have an opportunity to target a certain population of students and impact their ability to transition into academic positions.”

Patrick Aghadiuno, a sophomore from Baker College, said that part of the issue of underrepresentation comes from the preference of focusing on facts and statistics of STEM fields rather than the diversity of the field, and that the lack of concern for increased diversity in STEM is reflected in countries across the world.

“In Nigeria, we barely have astronauts, Nobel laureates, et cetera compared to countries like America,” Aghadiuno said. “I feel that as more STEM education is introduced to minorities, these skills could be brought back to their home countries and develop everything further. That's what I want to do. Even if I’m the only Black person in this whole school [pursuing this field], I personally will take my education, go back, raise up my homeland, Nigeria, and hopefully bring a new change to the face of STEM and science on a global scale.”

Aghadiuno said he also believes that hiring more professors of color can play a key role in improving the representation of minorities in STEM.

“I’ve seen that at Rice, the professors are actually part of the student communities,” Aghadiuno said. “If there are more STEM professors of color, I feel that would help with representation of minorities in STEM and drop that blockage, leading to an increase in diversity.”

According to Yvette Pearson, associate dean for accreditation, assessment and strategic initiatives at Rice, the majority of the grant is to be allocated to Rice over the next five years as the university takes a lead role amongst the three universities in the investigation of what exactly contributes to the barriers underrepresented minorities may face.

Pearson said that this grant is especially unique because of the key collaboration between the three universities.

“To have three otherwise-unrelated universities, and to have us all co-located and working together on this really enhances our research because we can see what is going on in all these different institutional contexts,” Pearson said.

Aghadiuno said he attended the Rice Emerging Scholars Program last year and believes part of the grant should be allocated towards expanding the program and those like it.

RESP is a six-week summer program created to help first-year students whose high school preparation for Rice’s STEM courses might have been insufficient. According to Aghadiuno, there were 39 students this year in RESP and 40 last year.

“[Other students] should have been able to take [RESP] classes to be able to catch up because of the set-backs they had coming into Rice, but they didn’t because there is not enough focus on expanding programs that incorporate all the demographics,” Aghadiuno said.

Alexus Arizola, a Will Rice College sophomore majoring in computer science, also supports the idea of expanding programs like RESP.

“RESP prepares you well for your introductory courses but beyond that, a lot of us find ourselves falling into playing catch-up over the next few years,” Arizola said. “Maybe another way to spend the grant is investing in a program that's similar to RESP that can help students already at Rice.”

Pearson said that the grant is not going to be directly tied into RESP, but Rice is looking into programs that are designed to attract and better engage and support students from diverse backgrounds.

The ultimate goal, DesRoches said, is to disseminate the findings of the grant project to other universities.

“We’re hoping to create this model that shows that you can impact the number of underrepresented students that end up going into academia, engineering and other fields [when you implement certain programs],” DesRoches said.

DesRoches said that the issue of underrepresentation is not central to just Rice.

“There are barriers at all universities,” DesRoches said. “In terms of biases, what are the biases that faculty have going through the hiring process? Even when we hire faculty through various committees, are there biases that are keeping colleges from considering underrepresented students?”

Arizola also said the lack of Hispanic faculty can be discouraging.

“I only know a handful of Hispanic professors, and even then, none of them are my professors, so sometimes it’s hard to want to keep pursuing [STEM careers],” Arizola said. “I think bringing in more minorities from underrepresented, underserved communities would definitely help — it can encourage prospective students to come here as well as give students already here a better sense of community.”

As far as the broader implications of this grant go, Aghadiuno believes this issue of underrepresentation is worldwide.

“The lack of representation we see in schools here is a microcosm of what is going on at a global scale,” Aghadiuno said. “In countries where most of these minority groups come from, STEM fields are not as funded, developed or explored as here.”

Following an 18-4 regular season, the Rice women’s basketball team made history in the postseason by becoming the first-ever Conference USA team to win the Women’s National Invitational Tournament. The Owls qualified for the WNIT, which consists of 32 teams who narrowly missed out on the NCAA tournament, after their last-second loss in the C-USA title game cost them a spot in March Madness.. The Owls fought past their opponents in bracket play, winning every game by double-digits, before defeating the University of Mississippi in Sunday’s final by a score of 71-58.