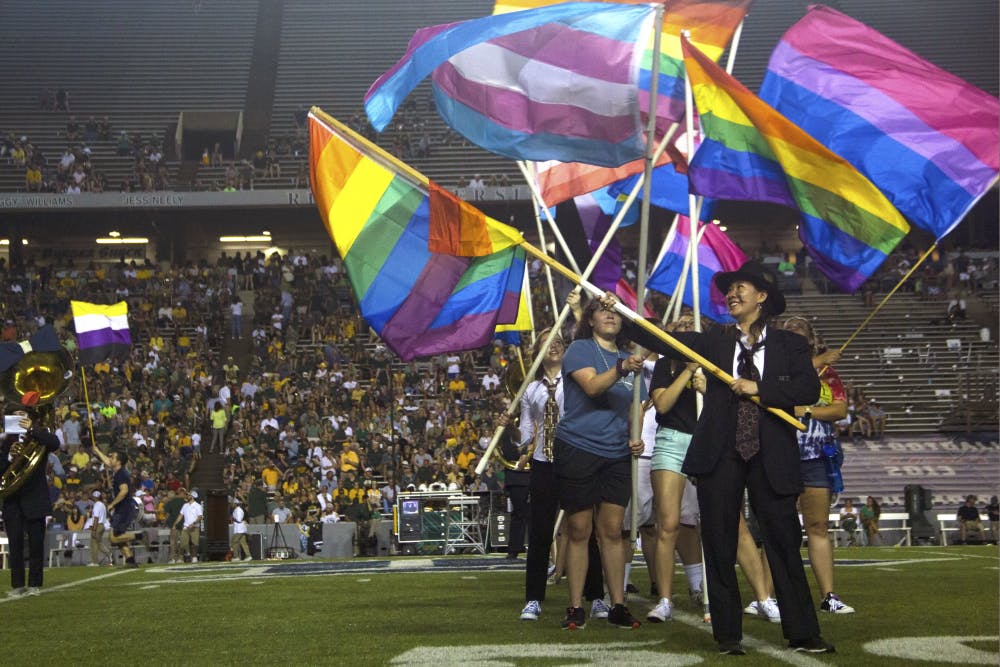 During halftime of the football game against Baylor University on Saturday, over 50 students and alumni from Rice and Baylor ran onto the football field bearing pride flags. The halftime show, organized by the Marching Owl Band, was a protest against Baylor’s discriminatory stance toward LGBTQ+ students, according to Chad Fisher, the public relations representative for the MOB.

In late August, Baylor University President Linda Livingstone published a statement formally opposing premarital sex and homosexuality on the university official website. The statement came days before an LGBTQ+ student group, Gamma Alpha Upsilon, was denied their request for a charter, according to the Dallas Observer.

“The university affirms the biblical understanding of sexuality as a gift from God,” its online statement reads. “Temptations to deviate from this norm include both heterosexual sex outside of marriage and homosexual behavior. It is thus expected that Baylor students will not participate in advocacy groups which promote understandings of sexuality that are contrary to biblical teaching.”

During the halftime show, students carried eight different pride flags onto the field, representing the asexual, transgender, non-binary, intersex, gay, lesbian, bisexual and pansexual communities and assembled into a formation spelling out the word P-R-I-D-E. In addition to Rice students and alumni, the participants also included four alumni from Baylor, according to Fisher, a Sid Richardson College senior.

According to Izzie Karohl, who participated in the show, running onto the field was a liberating experience.

“The Baylor folks booed when we asked them to reconsider their policy, but that’s as expected,” Karohl, a Will Rice College sophomore, said. “But the small cohort of Rice people were cheering. My [resident associates] were cheering. I think that’s all that really mattered to me.”

According to Anna Conner, the vice president of Gamma Alpha Upsilon, reactions among Baylor students to the MOB’s halftime show have been mixed.

“Dr. Livingstone, our president, was there to see it, which was amazing,” Conner, a senior at Baylor, said. “Mostly, people have been happy about it, but ... I’ve seen [others] complaining about it and booing during the performance under the pretense of them cheering for their sports team.”

Fisher said the MOB had decided on “Star Wars” as the theme of their halftime show over the summer but realized during their show writing meeting that they wanted to also address Baylor’s statement on human sexuality.

“We are so fortunate to be on such a diverse and accepting campus and wanted to leverage that privilege to support those who are fighting for the same on their campuses,” Fisher said.

According to Fisher, the MOB posted in the class groups on Facebook asking for participants and donations and received an overwhelming response.

In total, the MOB received over 70 flags for their show, all of which were donated by alumni and students.

“One Rice [alumnus] even bought 32 flags for us!” Fisher said.

Karohl said she learned about the show when a MOB member posted in the Rice Pride GroupMe. Karohl said her primary reason for participating in the show was to show solidarity with the LGBTQ+ students at Baylor, but that it also became a personally significant moment for her.

“It was kind of thrilling to be out in a space [that] I care about,” Karohl said. “I grew up in Houston. My annual school rivalry game was in Rice Stadium, and the church I grew up going to is adjacent to Rice — we’d park in Greenbriar Lot. To come back to this place where I’d been closeted [and] ashamed and now be joyfully running around the field with a pride flag was an unbelievable transition.”

After the show, Fisher said the MOB received an outpouring of support and coverage through social media, including coverage by the Houston Chronicle.

“We heard from so many Baylor and Rice alumni who were so appreciative of our show,” Fisher said. “To us it did exactly what we wanted: to celebrate acceptance and diversity at Rice and call attention to Baylor’s lack of recognition for their diverse campus.”

Diana De La Torre, who also participated in the show, said she hopes the halftime show provokes thought among Baylor’s administration about changing their discriminatory policies.

“I hope that Baylor seriously reconsiders their policies concerning LGBTQ+ students and that our students at Rice can feel reaffirmed in knowing that they have a community that stands by them on campus,” De La Torre, a Baker College junior, said. “I have browsed through social media and have seen many Baylor alums and current students express their gratitude towards our statement and it warms my heart that we were able to show solidarity with the Bears.”

Conner said administrative change to recognizing Gamma Alpha Upsilon as an official club could make a world of difference to some LGBTQ+ students at Baylor.

“As a club, we don’t exist to try to change anyone’s mind or shake up the status quo,” Conner said. “We’ve existed since 2011 and us gaining official recognition would change nothing for the majority of students on campus. But for the few people that need us and don’t know we exist or don’t feel safe enough to come to us yet, that change would mean the world to them.”