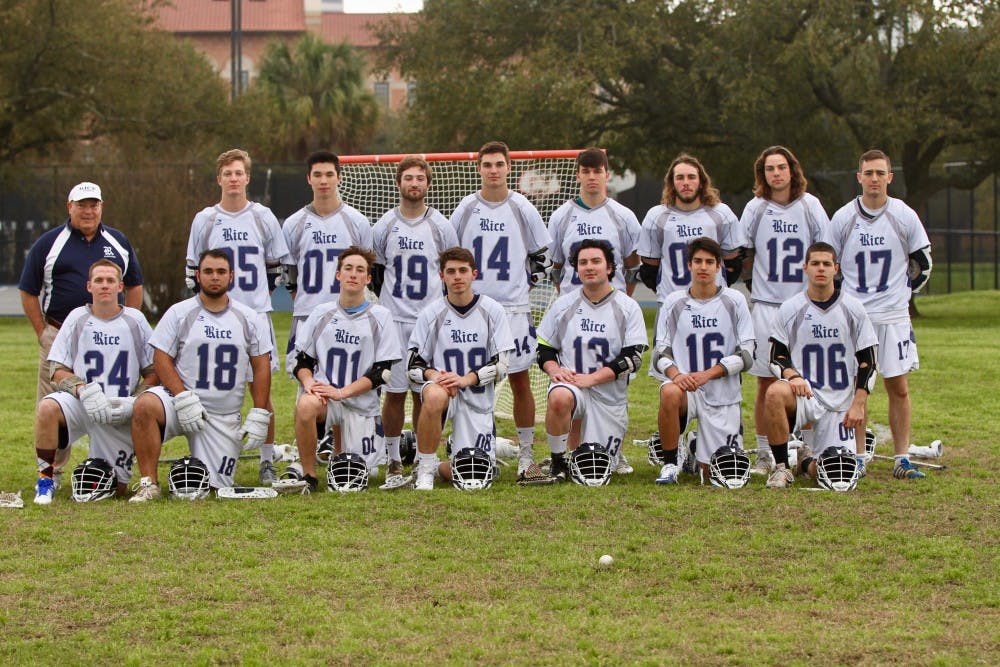 The club lacrosse team is not vastly different from the various other club teams Rice has to offer. They’re a team that competes with other schools and continues to grow in size. But one way in which this team is unique is the make-up of the 27 people on it. As of the first two practices, six women have either showed up to a practice or expressed interest in joining the team, making club lacrosse one of the only mixed-gender team club sports.

“As a program, we’ve been getting steadily better over the past six years,” team captain and McMurtry College senior Davis Nelson said. “We’re really excited about the upcoming season.”

The team’s growth in size in recent years has been substantial. Though the group had around 14 people four years ago, they have had 27 players show up to their first practices this fall. According to Duncan College senior and team captain Brendan Matthews, the team welcomes all newcomers.

“It’s not a strange thing for us to have girls on the team,” Matthews said. “If anyone wants to play, they’re more than welcome to.”

Jones College junior and team captain John Townley added that there are usually one or two women that express interest, so the current numbers indicate an increase in female participation.

According to McMurtry freshman Cindy Sheng, one of the biggest challenges she faces is not only joining a club sports team made up of mostly men, but learning a new game.

In addition to the added contact, the equipment is different for men than for women. For one, men’s lacrosse requires a chest protector. Additionally, the pocket of a women’s lacrosse stick is shallow, whereas a men’s pocket is deeper. Sheng said men’s equipment makes catching the ball easier but throwing the ball harder.

“[The men’s stick] also has more torque, so that you can shoot it a lot faster,” Baker College freshman Rachel Waite said.

Nelson said the team captains are aware of the adjustments required of female players and they try to address them.

“We play in a league of men’s [lacrosse] teams,” Nelson said. “So we play by men’s rules, using men’s equipment. We do our best to make sure that the ladies that do join the team have an easy time acclimating over that difference in the rules and the equipment.”

According to Sheng and Waite, the captains are doing well at getting the female players acclimated to the team.

“I didn’t expect to commit to [the team],” Sheng said. “I thought they probably [wouldn’t] want women on the team because it might be a hindrance. But the captains are really great at being inclusive. They made everyone feel like they belonged.”

Still, Sheng said increased physicality is going to be one of the hardest parts of her transition to playing under men’s lacrosse rules.

“Everyone is huge; it’s a little intimidating,” Sheng said. “I think sometimes [the men] might be a little bit afraid to touch us because we’re a lot smaller, so they don’t want to hurt us. I don’t know what it’s going to be like when the season actually comes. We might just get trucked.”

But Waite also said the talent discrepancy between male and female lacrosse players is not quite as large as one might expect.

“I think women’s lacrosse is a more technical game, so we’ve built up those skills, and that has allowed us to be able to hold our own in practice,” Waite said. “Setting up around the cage, basic passing and technique definitely carries over [from women’s lacrosse].”

Nelson said that size doesn’t really factor into the decision of playing time.

“I would say [playing time] is more [determined by] skill level than [being] male or female,” Nelson said. “If they’re good, they’re gonna play.”

Looking toward the future, Waite said she is interested in starting her own women’s lacrosse club team, but does not want to start one right now.

“I want to see how things run with the guys,” Sheng said. “But in the future, if we could make our own team that would be really cool.”