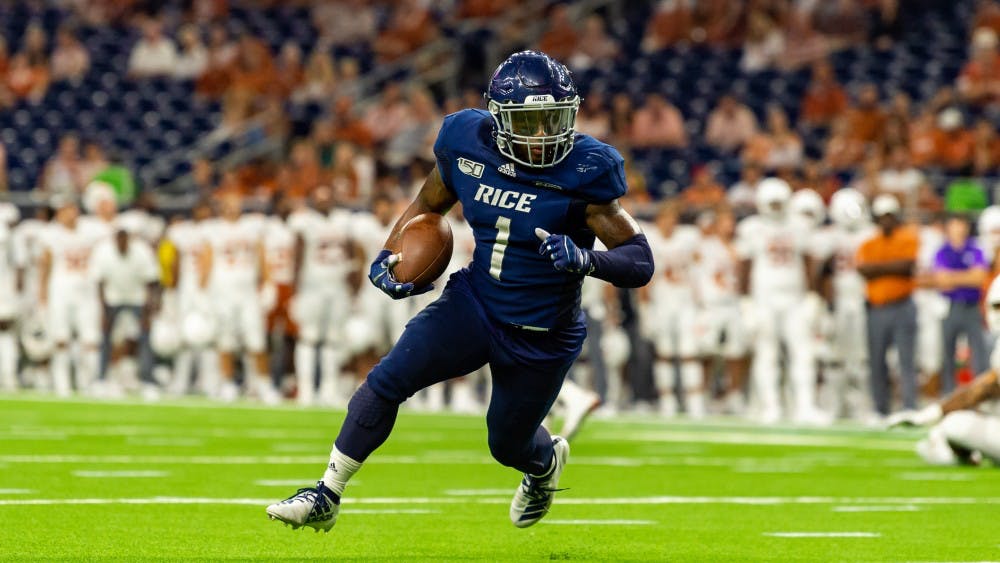 September 14, 2019: during the game between University of Texas Longhorn and the Rice Owls at NRG Stadium in Houston, Texas. The Texas Longhorns win 48-13 (©Maria Lysaker)

Rice football’s moonshot fell short, as the University of Texas, Austin, defeated the Owls 48-13 on Saturday evening at NRG Stadium.

Texas won the coin toss and chose to receive the opening kickoff. The Longhorns promptly drove 82 yards and capped their drive with a 25 yard touchdown pass from junior quarterback Sam Ehlinger to freshman Roschon Johnson. Texas continued to score four consecutive touchdowns to help build a 31-0 first half lead. By the end of the third quarter, UT second string redshirt freshman quarterback Casey Thompson replaced Ehlinger and the Longhorns had subbed in portions of their second unit. But Texas never let up. With 53 seconds remaining in the fourth quarter, UT put a stamp on the game with a 98-yard kick return touchdown.

According to Rice head coach Mike Bloomgren, the Longhorns presented a significant challenge, and though the Owls did not surrender, they were overmatched at times.

“[UT] did a lot of things to make it tough on us,” Bloomgren said. “I think one through 22, we couldn’t really match up with them. We have a handful of guys that could match up with them for 60 minutes, and I thought our kids still continued to fight, which is what I want to take away from this game and be proud of, but we are going to keep working the program and try to get to the point where we can play with those guys and beat and exceed what they can do for 60 minutes.”

Led by Ehlinger, a potential Heisman Trophy candidate, the No. 10 passing offense in the country totalled 338 passing yards and three passing touchdowns against Rice. Bloomgren said he was impressed with Ehlinger’s performance.

“[Ehlinger is] a talented kid,” Bloomgren said. “I went into this game knowing that he’s got elite arm talent and that if you give him time, he is going to make plays down [the] field. But the other thing we saw first hand on those drives was that he was moving the sticks with his feet ... He is a talented kid. He is good with his arm and he is good with his legs.”

On the other hand, Rice graduate transfer quarterback Tom Stewart was 3-7 for 21 yards in the first half before finishing 12-23 with 179 yards. Stewart started in place of redshirt freshman quarterback Wiley Green, who was injured in the Owls’ previous game against Wake Forest University. Stewart and Green had been competing for the starting role during the offseason, before it was ultimately awarded to Green at the start of the season. This was Stewart’s first Football Bowl Subdivision start. He previously played quarterback for Harvard University, who compete in the lower Football Championship Subdivision.

Even after UT developed a substantial lead, Rice leaned on its running attack. Overall, the Owls attempted 31 rushes and 23 passes. According to Bloomgren, Rice’s offensive imbalance did not result from an effort to neglect the passing game.

“We tried; we had consecutive series where we threw it, and couldn’t protect, [or] get behind the sticks, and at some point nothing was working,” Bloomgren said. “We weren’t just committed to the run; we were trying other things.”

Graduate student running back Aston Walter carried the majority of Rice’s rushing attempts and finished with 69 yards on the ground. According to Walter, his team was committed to the challenge of facing UT.

“I can say from a team aspect that when you looked to the sideline to your guys, nobody quit,” Walter said. “Nobody seemed like the moment was too big for them.”

“I think that whenever we look at this film, it’s going to come down solely to what could we have done better,” Walter said.

At halftime, Rice’s Marching Owl Band formed the number “2.89” to mock a tweet published by the Longhorns’ social media staff last season congratulating the team for its record-breaking 2.89 cumulative GPA:

Rice faces its final non-conference opponent of the season next Saturday. The Owls will take on Baylor University at 6 p.m. at Rice Stadium.

Rice faces its final non-conference opponent of the season next Saturday. The Owls will take on Baylor University at 6:00pm at Rice Stadium.