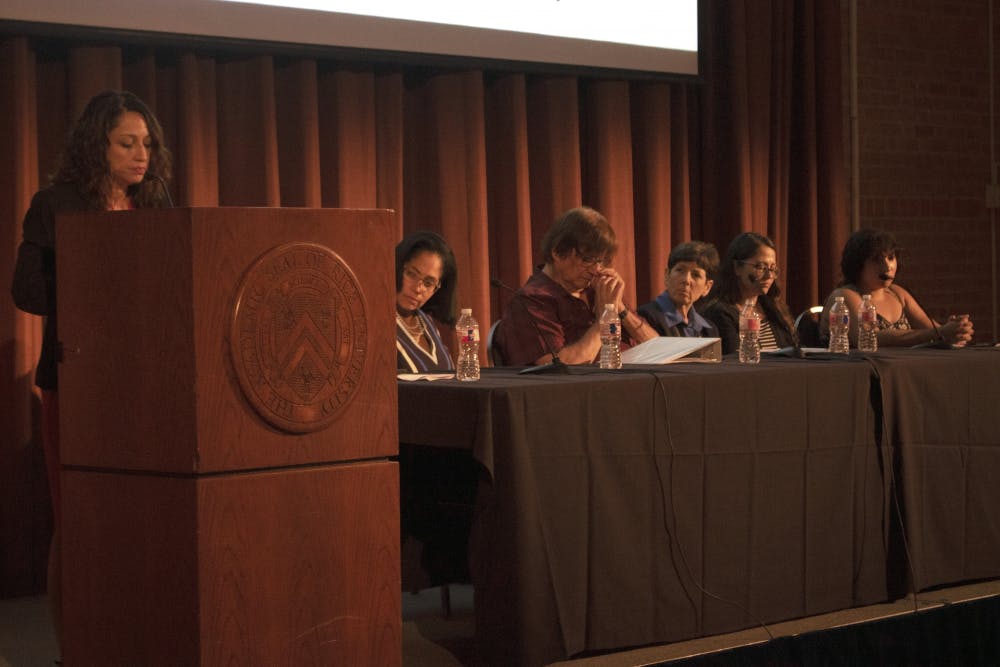 Exactly one month after the mass shootings in El Paso and Dayton, Ohio, and three days after the shooting in the Midland-Odessa community in West Texas, members of the Rice community met in the Grand Hall of the Rice Memorial Center for a panel discussion and vigil in an event called “Reflections on El Paso: A Time for Unity.”

During the panel discussion, Emani Brown, a student from El Paso, said that she could remember the exact moment when she first heard that there was an active shooter, while she was at her internship in Connecticut.

“I remember feeling so much fear, I called my mom immediately. My mom’s cousin was inside that Walmart an hour before the shooting. My aunt and her grandson were on lockdown at the dentist’s office,” Brown, a Jones College junior, said.

Jenifer Bratter, associate professor of sociology, said that one of the most humbling aspects of the shooting in El Paso was that it, like many recent shootings, took place in a space typically deemed safe. She also said that she felt a connection to the victims.

“When this shooting occurred, I pored over the biographies of the victims and I saw people that I knew even though I didn’t know them,” Bratter said. “We need to see ourselves in every victim.”

Sophia Martinez, a graduate student in the English department from El Paso, said that when she found out about the shooting, she was participating in a workshop hosted by Jose Aranda, who is an associate professor of Chicanx and American literature, working with a community of Chicanx, Latinx and Indigenous scholars to discuss the issues, the symptoms, the causes and the effects of the logic of white supremacy.

“Being with this community in this particular moment is what stopped me from breaking down right then and there,” Martinez said.

Brown said that the shooting in El Paso affected her differently than other shootings because it happened in her hometown.

“I guess I didn’t realize what it would be like when it hit so close to home,” Brown said. “And I can tell you that it’s been mentally draining, every single day. The energy that it has sucked out of me has been incredible, and I’m trying to heal.”

Professor Luis Duno-Gottberg of the Spanish, Portuguese and Latin American studies department said that Rice, as a university environment, could play a role in activism and prevention.

“Universities are places that are devoted to the production of knowledge and to research,” Duno-Gottberg said. “I think we have to teach more, we have to research more and we have to think also about our teaching and research mission beyond the classroom and branch out into the public sphere.”

Bratter also said that the university environment nurtures critical thought, but often remains in the abstract.

“We are very fortunate to be in one of the most diverse cities in the country,” Bratter said. “I think one of the ways we get to know each other is to get to know more than each other, which is to branch out into the community that is literally across the street, and down the block, and on the light rail, and in the north side, and in Fifth Ward, and in Third Ward and all over — because those are our people too.”

Duno-Gottberg said that he would like to urge people to interpret the frequency of mass shootings both along the lines of a public health emergency and as a cultural crisis.

“Let’s denounce hatred when we see it and let’s vote as if our life depended on it,” Duno-Gottberg said.

Martinez said that it is important to provide financial support for organizations that prevent violence and provide resources. She also said that the causes of mass shootings are complex and deeply rooted.

“It doesn’t stop at just mental illness or gun control. It’s much deeper, and older and scarier than that,” Martinez said.

Richard Tapia, a professor in the department of computational and applied mathematics, said that President Donald Trump’s words encourage other people to act on their racism and said that the second amendment is “totally outdated.”

“Trump has a dark spot in his heart, for [Latinx people] in general, and for Mexicans in particular,” Tapia said. “He must be judged by his acts of cruelty, hatred and inhumanity to our people.”

Dena Marks, regional director at the Anti-Defamation League, said that hate speech should be reported.

Regarding the anti-immigrant posters that were recently found on campus, Bratter said that although Rice is a typically inclusive environment, threats need to be taken seriously.

“I feel very fortunate to work in a place where I see that culture [of inclusion] spread throughout. When we see those posters we see that it’s such an extreme exception, we say that ‘Well, this isn’t Rice, this isn’t here,’ but we need to take it seriously,” Bratter said.

“As you reflect on the tragedy that occured in my hometown, you must be cognizant that this is a nationwide issue,” Brown said. “We cannot continue in the direction we are headed in as a nation.”

Houston Poet Laureate Leslie Contreras Schwartz (Hanszen ’02) read a poem that she wrote specifically for the vigil, incorporating lyrics from the song “Paloma Negra” into the poem. The event concluded with a performance by Mariachi Luna Llena, a campus mariachi band.

Brown said she thought that most people at Rice take the time to make others feel comfortable and included, and that she was grateful for the turnout at the event.

“Seeing all these faces means the world to me, I don’t think I can even put it [into] words,” Brown said. “We just need to keep going in the direction we’re going.”

Tapia said that while Rice students have improved their engagement and activism since the 1970s, it is important to continue that engagement.