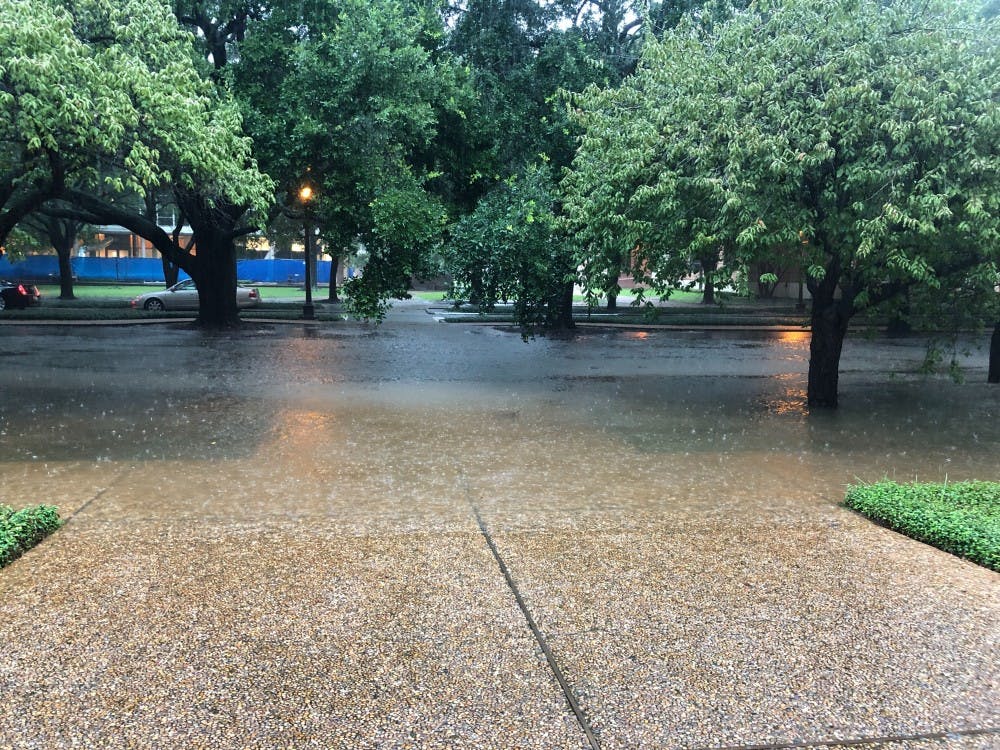 In an email to President David Leebron, Dean of Undergraduates Bridget Gorman, Interim Provost Seiichi Matsuda and the Thresher, Drew Axelson, a Wiess College junior, said that he was frustrated with how the administration responded to the storm and flood conditions.

“The fact that Rice contradicted city officials and did not cancel classes until hours after the city of Houston said not to travel is ridiculous and unacceptable,” Axelson said in his email. “Rice loves to tout its recent research on climate change, flooding in Houston, and Hurricane Harvey, but sits back while streets in and around campus turn to rivers after 45 minutes of heavy rain.”

Gorman said that the initial decision to not cancel classes was a result of an incorrect forecast and Imelda’s unpredictable nature.

“We decided to proceed with normal operations as the information at hand at that point indicated that while rain was likely, the storm was expected to move away from the city and toward the north and east,” Gorman said. “However, the rain began to intensify after 10 a.m., and reports of flooding across the Houston area began to appear. [The Crisis Management Team] made the decision to cancel classes and related activities at 1:30 p.m. given the now serious incidents of flooding on campus and across greater Houston.”

Loren Goddard, a junior at Hanszen College, said that the university should have considered the effects on off-campus students and canceled classes sooner.

“It might be difficult for the university to know how bad the rain is going to get, but as an [off-campus] student it would have definitely been nice to know [that classes would be canceled] before I got to campus so I wouldn’t have to worry about my safety on the way home,” Goddard said.

Axelson said that his car flooded earlier this school year while sitting in West Lot 4 and with the conditions on Thursday, he was worried about this happening to him again.

“I walked through the water to check on my car in West Lot, and saw many students and staff doing the same,” Axelson wrote. “For many students and underpaid [Housing and Dining] and facilities staff, our cars are our greatest asset, and we all know they’re not safe from flooding in Rice’s parking lots.”

According to Eric Rodriguez, the student maintenance representative for Will Rice College, leaks began in the Old Dorm ground floor and in one of the windows in the commons due to Thursday’s heavy rainfall.

The storm also caused the roof of a U.S. Postal Service sorting and distribution center  in North Houston to collapse, which led to delays in the delivery of packages to campus, according to Joyce Bald, the Hanszen college coordinator.

Gorman said that she and the administration are open to feedback about how they handled this situation and will consider it in similar situations in the future. According to Gorman, she will be meeting with leadership from the Student Association early next week regarding student feedback.

“The safety, security and wellbeing of the Rice community is our first priority during a significant weather event,” Gorman said. “Any time our campus experiences such an event, we review what happened and ask ourselves how we might improve our response.”