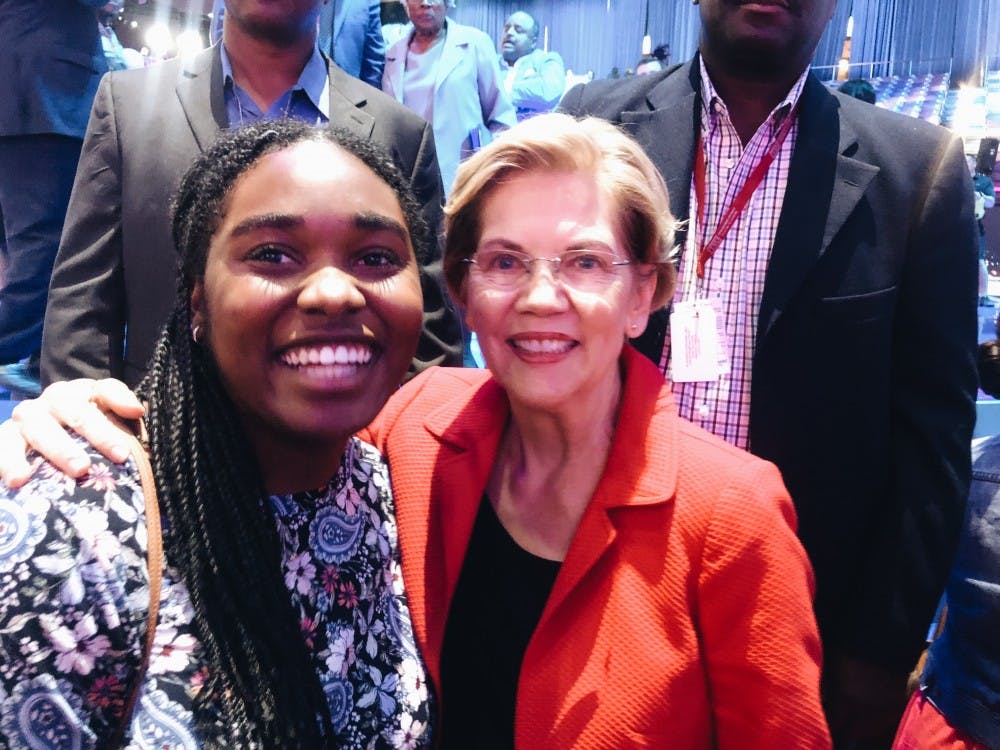 Maddy Scannell, president of RYD, said she requested the tickets through an allotment to Houston youth from the Democratic National Committee.

“The debate was held in Houston because the exceptionally diverse and vibrant city reflects the future of the United States,” Scannell, a Martel College junior, said. “And broadly, as [DNC Chair] Tom Perez said before the debate, Texas is a battleground state. We have the ground game and the energy to flip this state blue and defeat Trump in November.”

The candidates were asked to speak primarily on healthcare, gun control, conflict in the Middle East and education in addition to a wide variety of other topics, including veganism, democratic socialism and trade relations with China.

Divine Webber, one of the 60 Rice students in attendance, said that she was glad to hear discussion on healthcare but would have liked discussion on reproductive rights, the pay gap, sexual assault or LGBTQ+ issues. Webber, who was able to snag a selfie with Warren, also said that the debate hall’s atmosphere felt more relaxed than she had anticipated.

“Based on how the candidates were interacting with the audience — smiling and waving — [Harris]’ loose tone, the not-too-heavy content of the questions and the tendency of the audience to shout out words of encouragement like ‘Period!’ and ‘Tell ’em!’ after the candidates’ statements, the atmosphere was not as intense as it may have seemed on camera,” Webber, a Duncan College sophomore, said. “A man behind me [yelled] to George Stephanopoulos that he was lookin’ good and George [turned] around in his seat to smile back at him.”

“Warren emerged among the progressives that include [O'Rourke], Castro, Booker and Sanders as the candidate who best responded to moderates’ criticism for the overreach on spending for policies all the candidates favor,” Stein said. “[Biden] rallied others like Buttegieg and Klobuchar to his camp of candidates critical of the overreach of other candidates on health care, student loans and even immigration policy.”

Stella Potemkin, a Martel freshman, said that she felt that attending the debate was the opportunity of a lifetime, a sentiment echoed by Webber.

“It didn't feel real to be in the debate hall,” Potemkin said. “I had to keep reminding myself that I was really there and the candidates were real people standing in front of me ... Being in the hall, I felt reassured about the enthusiasm, passion and fight of the [Democratic] base going into 2020.”

During the debate, the Trump campaign flew a 4,800 square foot banner above TSU’s campus reading “Socialism will kill Houston’s economy! Vote Trump 2020.” The debate predates a potentially contentious Democratic primary election, which will be followed by the 2020 presidential election — an election that three-quarters of the current undergraduate student body will have the opportunity to engage in on campus.

Webber said she thinks the 2020 elections at Rice will be emotionally charged due to the personal nature of policies currently being debated in the political sphere.

“These aren’t only seemingly distant topics like trade wars or the economy,” Webber said. “For example, we have [Deferred Action for Childhood Arrivals] recipients on campus, students who have been personally affected by gun violence, students whose reproductive rights have been threatened, students who will be saddled with enormous loan debt as soon as they graduate. It’s very personal.”

To see all of our live tweets from the debate, follow us on Twitter at @ThresherNews or @TheRiceThresher.