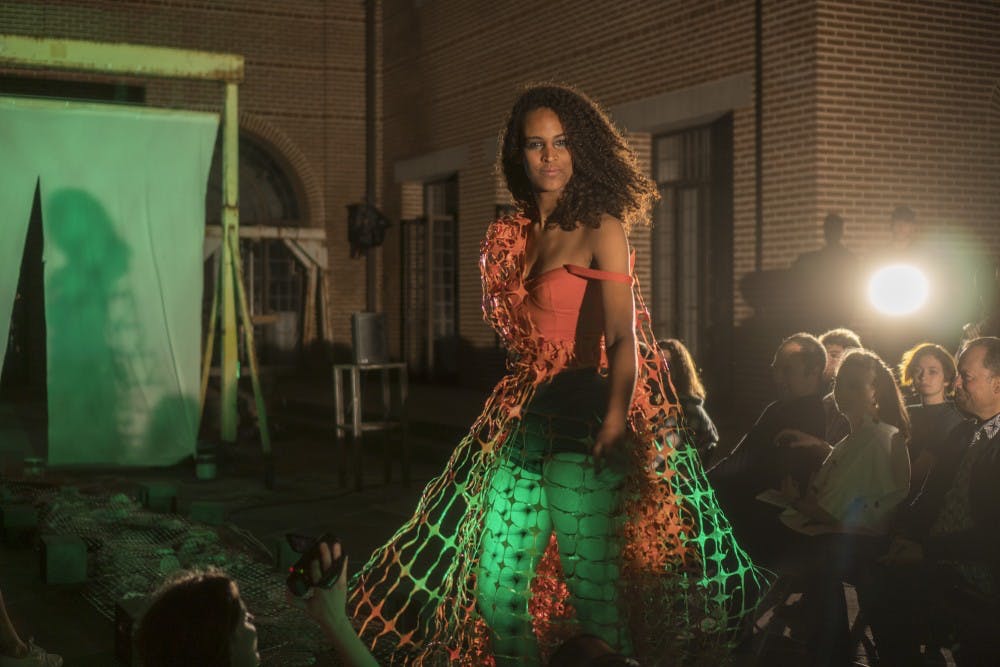 A few days after the ending ceremony of the Rice Undergraduate Research Symposium, another exhibition began — although some of the same presenters might look familiar.

Nineteen visual and dramatic arts students, most of whom are double majors, presented their work at the senior art show Thursday night. Their passion bleeds out into sculpture, painting and film but also through these other academic and cultural aspects of their lives — all on display in Sewall Hall.

This is perhaps most encapsulated by the sculptural work of Priyanka Jain, who is graduating with degrees in computer science and VADA with a specialization in studio arts . Her materials list includes yarn, chicken wire and computer parts.

In one piece, Jain, a Will Rice College senior, created and recreated dozens of tiny pointed blocks by hand, delicately flawed reiterations of the same model.

“I am constantly trapped in a system that never allows me to succeed. The further I try to impose order, the more that small imperfections stand out,” Jain writes in her artist’s statement. “But there is no perfect. Imperfections in recreating the same component are not errors but improvisations in an organized scenario.”

Another series of charcoal pieces by Tejas Kumar go further into the role of personal history in the creation of a decolonial identity. As an exploration of the self, the series doesn’t feel as celebratory as other pieces in the exhibit. They’re emotive and aesthetically striking, and still feel as though they are in search of a conclusion. They are clearly still in the process of unlearning and relearning during which there is “never a eureka moment,” as Kumar writes.

And although all of the pieces are visual, some utilize more performative mediums. In a cozy nook in one of the small side rooms, exhibit-goers could nestle into a pile of pillows in front of a projection of a film conceived and directed by Helena Martin, a Lovett College senior.

The short film, “Changeling,” feels like a dream that simultaneously grounds you in the comfortable hollows carved out by your own life. With a consistent glowing purple and glitter aesthetic, the film shimmers as its protagonist comes into their own identity after being adopted into a ragtag (but still aesthetically consistent) group of friends. While visually dreamlike, the film feels so familiar in its thematic presentation you can’t help but feel like your own experience is being understood.

The otherworldly was a common thematic premise, with a few projects dipping into the pre-apocalyptic. If “Changeling” felt like a vision, the performance “Trashion Show,” directed by Hanszen College senior Nonie Hilliard felt like a slice of another world that was as conceptually hilarious as it was interesting.

“Trashion” took place in 2040 — but actually in the subterranean courtyard of Sewall Hall. Models walked down in outfits made of bright orange construction fencing and what appeared to be shredded paper, but the art extended out into an immersive experience. As Hilliard describes in her artist’s statement, the audience was there to witness the fictional documentation of “the last fashion show of Houston designer Victor Ross, one of the few chosen by Relon Tusk to continue human civilization on Mars.”

During the show, it was not immediately apparent what was performance and what wasn’t. Members of the audience blended into Hilliard’s creative vision, sharing in something absurd and wonderful.

In fact, the entire senior art show felt like each of the artists was allowing us to share in tiny visualizations of themselves. The show was an opportunity to peer into a part of campus that rarely receives the attention or commendation it deserves from the student body. Although many are accomplished in other fields, each of the nineteen artists revealed the many ways in which the phrase “interdisciplinary” can not begin to encapsulate the nebulous complexity of their identities.