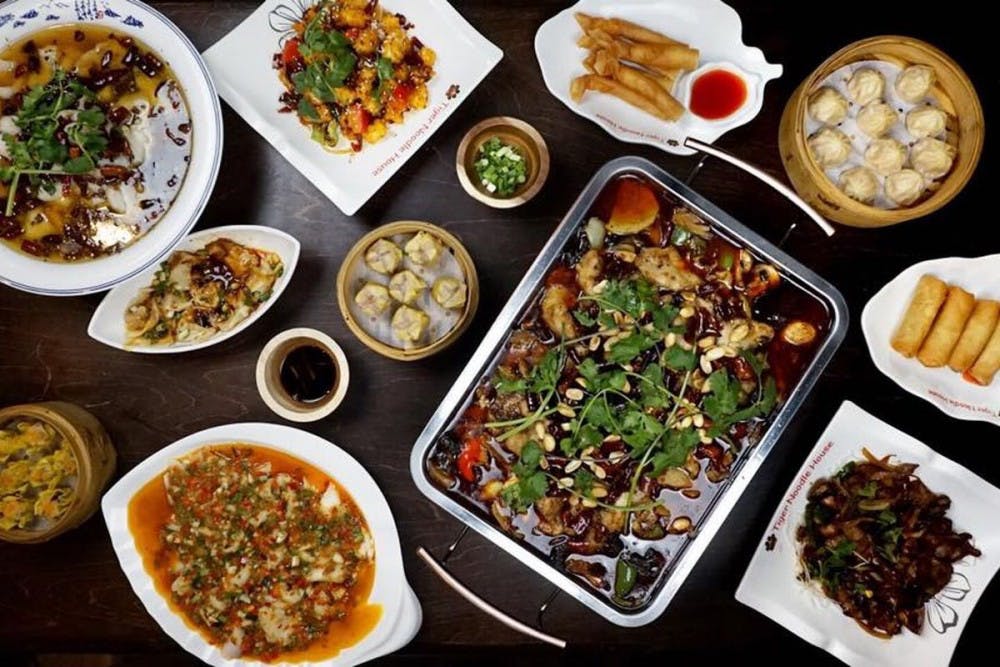 Tiger Noodle House is the first Asian restaurant to join the wave of newcomers to Rice Village — and it does not disappoint. A Chinese restaurant serving homestyle dishes from different regions in China, Tiger Noodle House delivers traditional flavors and large portions in a laid-back setting. One of my biggest qualms with Rice’s otherwise prime location is the lack of authentic Asian cuisines within walking distance. While the two “Asiatown” areas in Bellaire and Katy provide many solid options for Asian flavors, both are pretty far away — especially if you don’t have a car on campus.

Chinese food, specifically from the province of Sichuan, has become increasingly popular in Houston and the U.S. as a whole. In fact, there are now multiple restaurants within 10 minutes driving distance from Rice that serve Sichuan food, all of which have popped up in within the last few years. While Sichuan cuisine is great, it’s unfortunate that the delicious flavors from other areas of China remain overlooked. Chinese cuisine is incredibly diverse, varying from province to province, and Tiger Noodle House is one of the first restaurants in the immediate vicinity of Rice to showcase this.

Stepping into Tiger Noodle House, the smell of garlic and spice is almost overwhelming — in the best way possible. The modern interior feels similar to that of Mala Sichuan Bistro in Montrose, the restaurant that really put Sichuan cuisine on the map, with its dark palette and liberal use of wood. Opening the menu, I was excited to see dishes not commonly found in Chinese restaurants in the states: dongpo pork (a braised pork belly dish, 东波肉), Taiwanese sausage and stewed pork on rice (红烧肉).

A graphic on the second page of the menu shows the various origins of the dishes the restaurant serves, which hail from Taiwan as well as the provinces of Sichuan, Jiangsu, Shandong. While the prices are comparable to those of Mala Sichuan Bistro and Cooking Girl (with most entrees priced between 10 and 18 dollars), the portions are significantly larger without sacrificing the punchy flavors characteristic of Chinese cuisine. The spicy dan dan noodle was one of my favorites that I’ve tried in Houston so far, and the spicy Sichuan chicken struck the perfect balance between chewy and crispy.

Don’t sleep on the veggie and tofu dishes either — the spicy and sour shredded potato in particular is packed with flavor and cooked to a glorious crunchy perfection. The one complaint I had was with the dry fried green bean dish, which felt a little overcooked and under seasoned.

It’s really exciting to have a restaurant that maintains the authenticity of Chinese flavors so close to Rice. The longer I live away from home, the more I’ve found myself craving those traditional flavors that remind me so much of my mom and grandma’s cooking. Rice Village’s Asian food scene has been substandard at most, and I’m hoping that Tiger Noodle House can pave the way for other restaurants of its kind to come. So, next time you’re trying to pick a place for Saturday night dinner, consider Tiger Noodle House as an alternative to the usual Rice kid haunts — looking at you, Torchy’s.