Take Back the Night: Students march against sexual assault 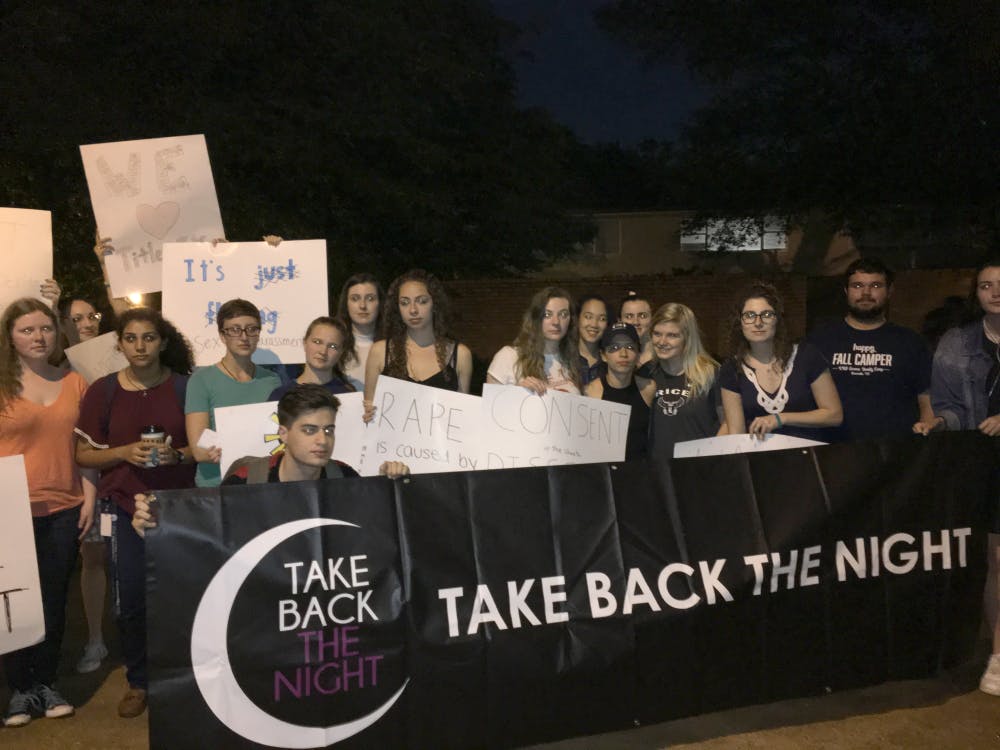 Around 20 students participated in the Take Back the Night march across campus last Thursday, April 11, to advocate for ending sexual and domestic violence and supporting survivors.

The Take Back the Night march, hosted annually by the Rice Women’s Resource Center, is part of a global event that began during the anti-violence movement in the 1970s, according to Jordan Everett, the staff advisor for the RWRC. The march began in Ray’s Courtyard at 8 p.m., then continued across campus with multiple stops for students to share personal stories, poems or songs.

“The event’s goals are to bring awareness to the issues of gender-based violence, provide a place for healing and support for survivors who choose to speak out and show a unified front in the face of fear of violence,” Everett, a Title IX resource navigator and student wellbeing specialist, said.

As they marched from stop to stop, participants took part in cheers such as “However we dress, wherever we go, yes means yes and no means no.” According to Mackenzie Kubik, a co-director for the RWRC, the last segment of the march was held in silence to show solidarity with the women on campus and around the world who have faced sexual and domestic violence.

“Yelling about something that such a vulnerable topic in such an overt way is something that is really hard to do,” Kubik, a McMurtry College senior, said. “I think just the vulnerability that comes along with that and the kind of confidence and solidarity that fall out of it is the most impactful to me.”

At three of the stops, students read poems they wrote themselves or found online, including poems by June Jordan and Halsey. At Willy’s Statue, Hanszen College senior Abigail Panitz sung a portion of Kesha’s “Praying” and Will Rice College freshman Izzie Karohl read a short anecdote on sexual assault.

“I think that the sharing and reflection always really inspire me and get me to think of things maybe I hadn’t thought of before,” Karohl said. “That was the part I was looking forward to, was hearing people’s stories and seeing what they brought to it.”

Kubik said Owl Days hindered the turnout for Take Back the Night because lots of students who would have participated were busy hosting and showing around prospective students. Next year, the RWRC expects to host Take Back the Night again, but Kubik said they may change the date to avoid the scheduling conflict.

To gather submissions for the event, Kubik said the RWRC sent out a Google form to their Listserv, GroupMe and Facebook page.

Kubik and RWRC co-coordinator Chloe Wilson were largely in charge of planning and running the event.

According to Kubik, the RWRC partnered with Students Transforming Rice Into a Violence-Free Environment to jointly host the event for the first time this year.

“We reached out to STRIVE, and they helped us decide that this year we were going to make it a march where we stopped at different points along campus and had an open-mic feel to it,” Kubik said. “In previous years, it’s been a march around campus and then people will read short stories or talk about themselves at the end, but we thought to do the breaking up this year would be nice.”

In preparation for Take Back the Night, the RWRC held a poster-making event April 10 in the RWRC office at the Rice Memorial Center.

According to Kubik, the poster-making event was new idea this year intended to encourage participation for the march. Supplies were also available immediately before the march for participants to make extra signs.

“We thought that if we got people to come out and incentivized them with snacks and art and a relaxing activity at a stressful time of year with the poster making, that it might also might encourage more participation for our actual event,” Kubik said.

According to Kubik, although Rice usually excels as a community at supporting students and preventing violence, it isn’t immune to issues of sexual and domestic violence. She said it is important to continue discussing these issues.

“I feel like the worst thing that could happen on our campus would be that the student body would be overcome with a sense of immunity to an issue, and then I think all that does is silence survivors, so this gives us a platform to make that pretty public,” Kubik said.