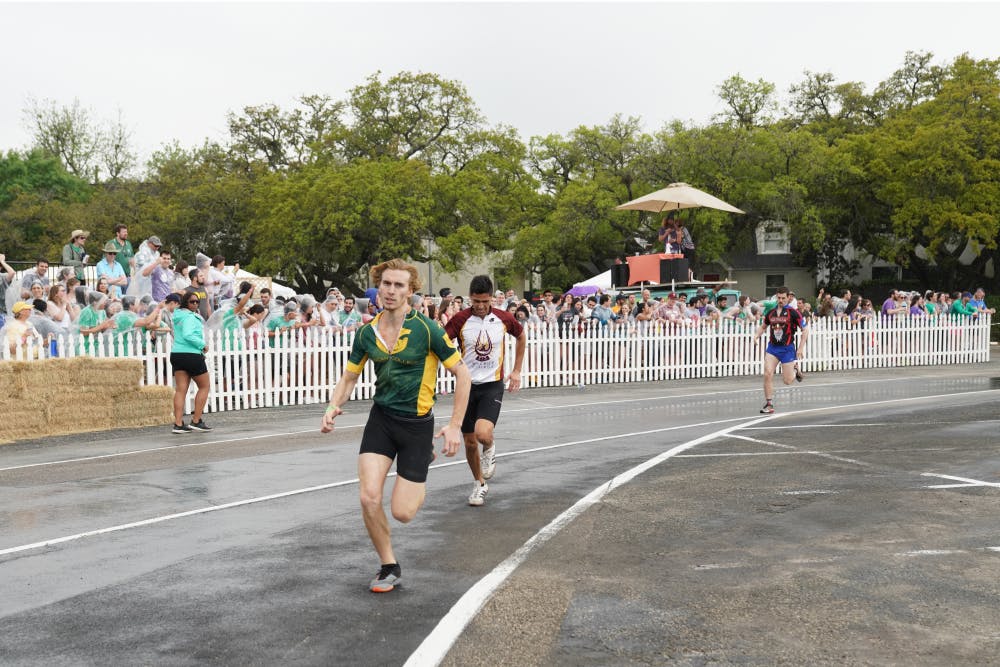 In the initial standings, McMurtry College was declared the winner of the men’s run while Will Rice finished second. In addition, the Jones College women’s team received seven penalties and  Lovett College, which did not have a women’s team, received a penalty. RPC altered times for McMurtry’s men’s run and Brown College’s men’s run and reduced penalties to the Lovett and Jones women’s bike teams after four colleges filed petitions, according to campuswide Beer Bike coordinators Enoch Peng and Rebecca Artall.

“It was brought to the attention of the campus-wide coordinators that split times during the men’s race for Hanszen [College], Jones, Brown and McMurtry were potentially incorrect,” RPC said on its website. “We used video evidence filmed from a bird’s eye-view and at the finish line to determine more accurate finish line times.”

A petition drafted by Will Rice biker Eugenio Mesta protesting the time split of McMurtry runner Stoyan Komitov led to RPC allocating a 62 second increase to the 22-second split time of Komitov, which resulted in McMurtry falling from first place to fourth.

According to Mesta, video evidence of the finish line filmed with a GoPro by alumni team biker Matthew Weatherman (Will Rice ‘18) was vital in Will Rice’s petition.

“For our petition, we sent them evidence for them to see what the real running splits were,” Mesta said. “We had someone who had recorded all of the laps of the Beer Run including the ending and showed that we were behind by four seconds at the end of the race. But with the 40 seconds in penalties McMurtry had and no penalties for us, it was clear that we should have been awarded with the win.”

Komitov said he understood the change in his time split, but he was disappointed because McMurtry no longer had its first Beer Bike victory.

“While I am sad McMurtry’s title was taken away, I recognize the sheer amount of work that goes behind setting up the event and enforcing the rules, so the official results should be respected,” Komitov said. “RPC messed up the timing of teams, but they recognized their error and supported their revisions with a statement and video evidence.”

Komitov also said he was thankful to receive a “transparent breakdown” of McMurtry’s chugging penalties from RPC but argued the review should have taken place before the official results were released the Tuesday following the races. McMurtry had previously hosted a victory party after the Beer Run.

The Jones bike team filed a petition questioning the seven pit crew penalties assessed to Jones’ women’s team. Anna Seballos, Kelly Turner, Sam Morimoto, Will Yarinsky and Rabea Tzenetos said they believed the results of the women’s bike race are “dubious” and have “no basis” in a statement to the Thresher.

“RPC did not prove anything about their penalties and refuses to clarify what they were beyond maybe something in the pit area,” they said in their statement. “They also have admitted to messing up and reducing our penalties from 70 seconds to 50 seconds, but 50 seconds still conveniently puts us in fourth place by 0.2 seconds. They also refuse to meet [us] in person so [we] can better understand the situation.”

The five said that Jones did not deserve to receive any penalties.

“Our pit crew is very experienced, well-trained and knowledgeable about pit rules,” they said. “Given that there were no complications or crashes in our race that would’ve caused anyone to cross lines in the pit, we don’t know where the penalties come from. To my knowledge, no college complained about us interfering with their race or team in any way...It’s the word of our assigned judge against ours that invalidates our official victory.”

Lovett also submitted a petition after the college’s women’s team received a ten-second pit penalty despite not participating in the race. Peng and Artall said this penalty arose from interference by members of Lovett College.

“This penalty is not as unlikely as one may think as a pit penalty includes members of a college ‘spilling into’ and crossing the line into the pit from the chug stand area,” Peng and Artall said in response to Lovett’s petition.

In regard to the Jones petition, Peng and Artall said their mistake was misappropriating the judging grades, but the final results are fair.

“Pit interference judges were assigned to watch a set number of colleges,” Peng and Artall said. “The Jones’ pit interference judge marked five infractions. Another judge also marked two infractions. Originally we included these, but as Jones was not in this other judge’s jurisdiction nor do we want to potentially double count penalties, we decided to only count the penalties from the assigned judge.”

According to Peng and Artall, during the quick switch from a men’s bike race to a men’s run, organization of judges became a problem.

“In the future, we would recommend practicing with the judges, specifically the finish-line judges, the morning of Beer Bike to make sure everyone’s responsibilities are fresh in their mind and to answer any last minute questions,” Peng and Artall said. We also suggest having multiple people on the campus-wide committee check the results.”

This article has been corrected to reflect that the Jones quotes were from a statement by five members of Jones.