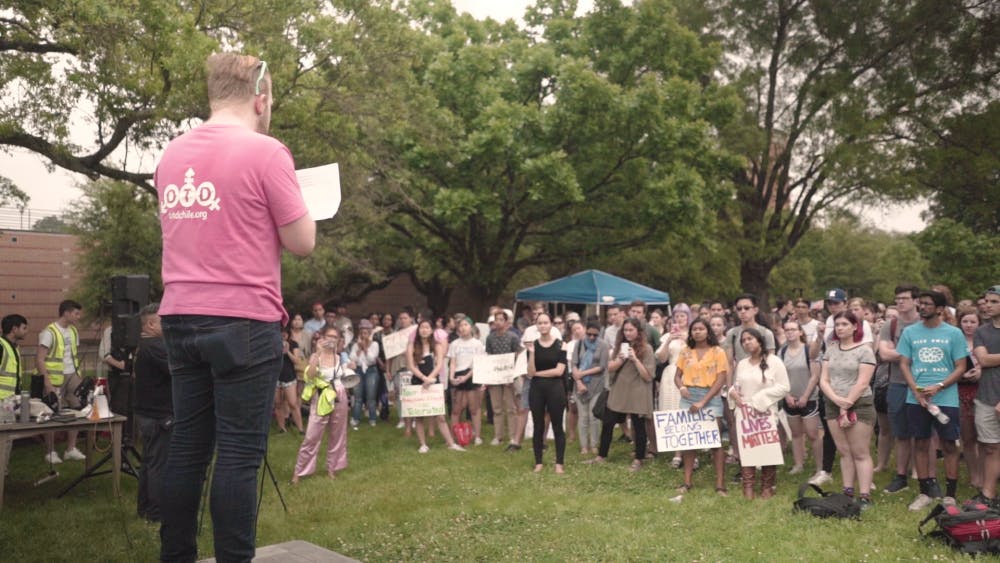 Over 100 students, faculty and staff gathered in the central quad to protest Vice President Mike Pence’s practices, policies and values  last Friday while he delivered remarks on the humanitarian crisis in Venezuela at the James A. Baker III Institute for Public Policy.

McMurtry College sophomore Arija Forsyth led the crowd throughout the protest in a series of chants, from ones that attacked Pence directly to ones that affirmed support for refugees and immigrants to a chant written specifically for the event that asked, “Where is Leebron?”

The first speaker at the protest, Duncan College junior Alice Liu, said that having Pence on campus could make members of the Rice community feel unsafe.

“When you are in a position of power like he is, and you are full of hatred like [Pence] is, you have the power to act on that hatred and cause suffering to others,” Liu, a member of Rice Left, said. “At this protest, on this campus, we are those others. So how can Pence’s presence on campus be anything but an attack against the members of our community, whose very existence is threatened by his bigotry, his rhetoric, his policies?”

“People like Pence have been making me feel unsafe my whole life,” Campbell, a graduate student in the department of anthropology, said. “When I was growing up in rural Michigan in the ’90s … being queer was the worst thing that could happen to you. But I wasn’t scared of who I was. I was scared of people like Pence finding out.”

“Until we stop the global gag rule, until we have fully funded healthcare in the U.S., until we support pregnant and parenting people in their choices, Pence’s policy will continue to jeopardize the health and wellbeing of millions of people,” Quan said during her speech.

In his speech, Martel College freshman Moses Glickman emphasized the importance of voting in the next election and said that it was important to use the right to free expression to speak out against Pence.

“There will be those who say that, as Americans, we ought to hear out what Pence says,” Glickman, a member of the Rice University Young Democrats, said. “Firstly, it’s hard to hear someone out when none of us were allowed in the room. Secondly, we believe in free expression, and when we disagree with those in power, we will never consider silence to be our only choice.”

In their speeches, both former Student Association President Ariana Engles and Liu said that they were against Pence’s decision to visit U.S. Immigration and Customs Enforcement’s headquarters to thank officials for “holding the line” at the Mexican border.

“‘Holding the line’ is code for denying asylum to Central American migrants and refugees; ‘Holding the line’ means keeping immigrants locked in concentration camps,” Liu said, punctuated by shouts of “fuck Mike Pence” from the audience.

Dean of Undergraduates Bridget Gorman, who stood in the back and spoke with students and visitors during the protests, said that she attended the event to provide emotional support to students if they needed it.

“Some [students], I think, are very emotional about this,” Gorman said. “They are in communities that have felt that the policies that the Pence and the [President Donald] Trump administration are espousing don’t reflect their values and their communities. I think it’s good to be here as a resource for them as needed.”

After the formal speakers ended their speeches, they invited members of the audience to speak. Junior Gerardo Penchyna asked that people focus on Venezuela rather than Pence.

“Please stop making it about [Pence], or about the current president, or even about the next election,” Penchyna said. “There are people dying in Venezuela. There are people fleeing the country in the thousands. This shouldn’t be a protest about homophobia or climate change. I am equally as passionate about those issues as you guys, but we need to concentrate on the issue at hand.”

Hanszen College senior Sonia Torres said that the protest should have been targeted against military intervention in Venezuela rather than solely focused on Pence’s domestic policies.

“I do not understand why we are not here protesting a military intervention,” Torres said. “We are not here just because Pence is a horrible person domestically. He has shown himself to be complicit and also outwardly supporting policies in Latin America that target and kill Latin American bodies. If there is any doubt in your mind that a Venezuelan family coming up through Central America through Mexico would not also be put in a cage once arriving at McAllen, you are mistaken.”

Baker College sophomore NB Shaper, who said they are the great-great-grandchild of Edgar Odell Lovett, said they believed in the importance of maintaining a spirit of activism on campus despite restrictions placed on the student body.

“Rice as an institution has really concerning origins, and I think there’s a pretty heavy pressure to critically investigate not only the systems we have in place now, but also the attitudes on campus about why and how and when students can and should speak up,” Shaper said. “Quite frankly, my great-great-grandfather would be horrified with me as a person. Maintaining this momentum is what will make Rice an institution worth supporting and protecting.”

Sid Richardson College sophomore Annabelle Crowe, who was in the audience, said that she did not feel “particularly radical” and that she was disheartened by the police presence at the protest.

Black Student Association President Drew Carter, who spoke at the protest, said that many people told him the event was a unique experience on Rice’s campus.

“For me, the happiest moments were when numerous seniors, graduate students, professors kept stating how they never experienced something like this on Rice's campus,” Carter, a Jones College freshman, said.

Liu said that she was glad to see a diverse group of people step up after the planned speeches and voice criticisms about the protest.

“Especially at Rice where direct confrontation is so rare, it was refreshing that no words were minced, and it was a natural way to directly address many concerns that we knew people, particularly Venezuelan students and generally the Latinx community, had leading up to the protest,” Liu said. “Positive or negative, seeing students speak with such passion was inspiring and reminded me why it was so important to organize this protest in the first place — to build community and show solidarity with the people on campus who need it the most.”