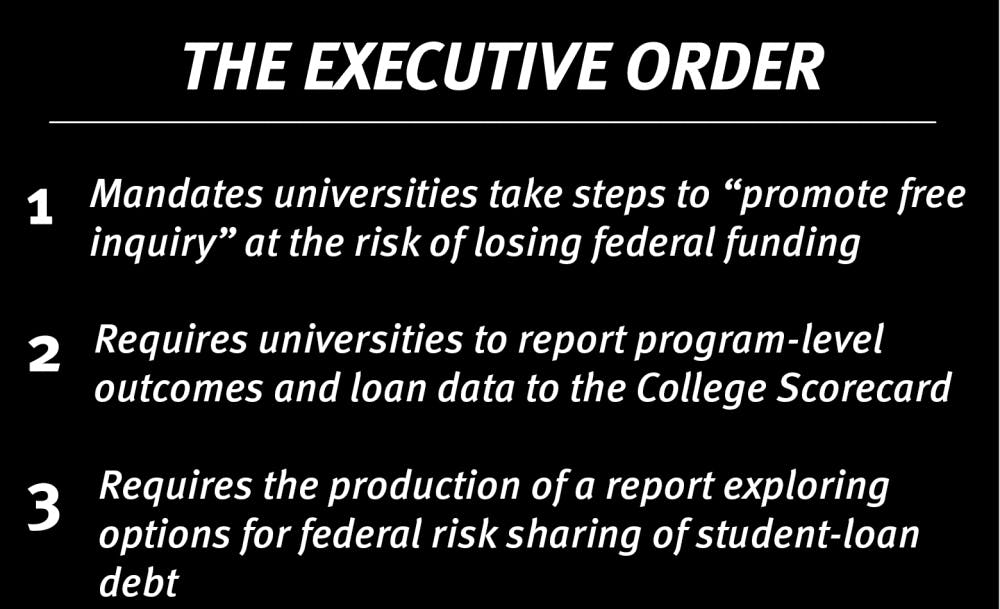 President Donald Trump signed an executive order in late March that stated that American universities, including Rice, must do more to protect free speech on their campuses.

The executive order mandates that universities take steps to ensure that students’ freedom of speech rights under the constitution are protected or risk losing federal funding. It also increases universities’ loan data reporting requirements and mandates the production of a report exploring the options for federal risk sharing of student loan debt.

The order was introduced at the Conservative Political Action Committee, where Trump cited the beating of conservative activist Hayden Williams last month at the University of California, Berkeley as evidence for the necessity of the order, which he signed March 21.

Robert Stein, the Lena Gohlman Fox professor of political science, said that while Rice will likely not be affected by the order as a result of its freedom of expression policy, it is still possible that speech is regularly suppressed on campus due to cultural factors.

“The absence of overt efforts to stymie expression of unpopular opinions does not mean those students and others at Rice who hold opinions not widely shared are comfortable expressing these opinions,” Stein said. “This is not limited to conservatives; I suspect many students of color and gays, lesbians, bisexuals and transgender persons have long felt a need to self-censor themselves at Rice. Enforcement by edict will not ensure free expression, it requires the community’s support and a consensus of tolerance, a condition that may be on the wane in the U.S.”

According to Rice Director of News & Media Relations Doug Miller, the history of speakers that Rice has hosted on campus reflects a long-standing commitment to free speech.

“Witness the fact that, in this academic year alone, the Baker Institute will host appearances by former President Barack Obama and Vice President Mike Pence,” Miller said. “That’s a reflection of a culture that not only talks about diverse opinions, but also listens to them.  And that’s what freedom of speech is all about.”

Members of the Academic Freedom Working Group, which wrote a letter outlining Rice’s commitment to open expression that was endorsed by the SA Senate last year, had mixed reactions to the order.

According to working group member Maurice Frediere, while freedom of expression is of the utmost importance, the executive order is primarily partisan and will actually result in an increase in speech suppression.

Former working group member James Altschul (Hanszen College ‘18) said that the executive order has the potential to be an effective strategy for promoting free expression on college campuses, but it will depend on implementation.

“The ultimate goal has to be developing a culture of conversation and civil disagreement and no executive order is a substitute for that,” Altschul said. “I don’t think it will affect things very much at Rice in the lives of the average student. But I hope that it will expedite the [Rice] administration’s official statement in support of our legislation.”

The executive order legitimizes the notion that college campuses do not currently support free speech, according to Mahdi Fariss.

“Freedom of expression, as far as we can tell to this point, is a good thing, if not always in the short run then in the long run,” Fariss, a McMurtry College senior, said. “The [executive order] actually does nothing to further the efforts of administrators working tirelessly to ensure that even the most controversial views have the right to be aired and debated.”