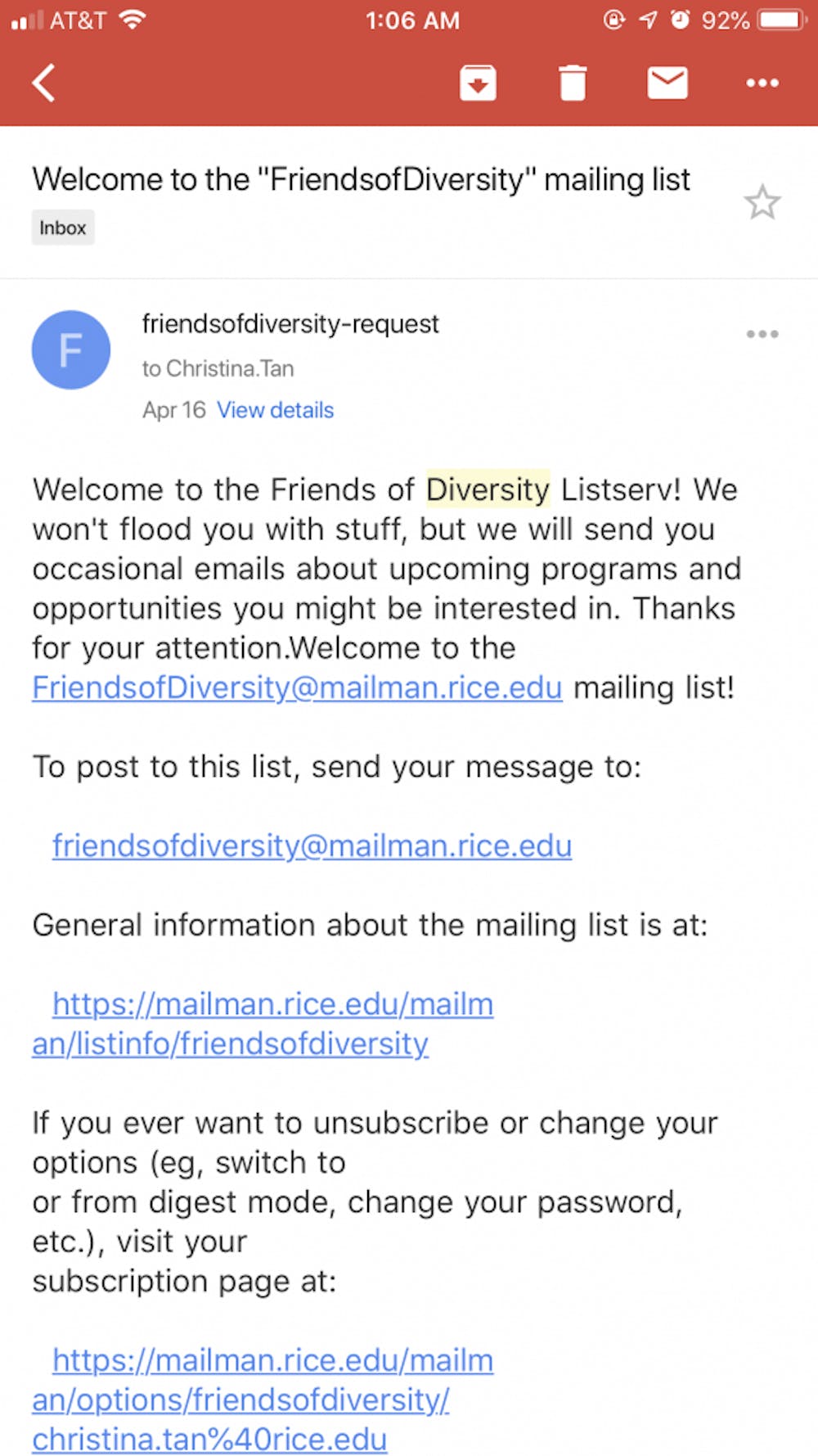 Primarily students of color across campus found themselves added to a “Friends of Diversity” Listserv Tuesday morning without signing up beforehand. According to Associate Director of the Multicultural Center Ijeoma Nwaogu, the Listserv was made months ago, and Tuesday’s addition was an effort to expand the Listserv’s reach.

On Wednesday morning, Nwaogu sent an email to the Listserv on behalf of the ODI apologizing for “errors made in the system” which allowed anyone to email the entire Listserv. Nwaogu announced the Friends of Diversity Listserv would be closed.

Nwaogu said students were added to the Listserv through a process of “adding attendees of the various events we hosted.” However, many students observed that everyone they knew on the Listserv was of a racial or ethnic minority. Wiess College sophomore Andy Cheng noticed this pattern almost immediately.

“Generally, it seems like only ‘ethnic’ people were on the Listserv,” Cheng said.

Cheng said he thought the Listserv was “dumb” and was annoyed he was added without his consent.

“It just feels like one of those bureaucratic moves that administration does so they can point to something and say how progressive and inclusive Rice is,” he said.

Jose Morales-Wade, a Wiess sophomore, quickly realized the Listserv was not moderated and sent an email posing as the Multicultural Center. His email asked students who were White to unsubscribe from the Listserv and encouraged the “Friends” to “report any suspicious pale-skinned members who may be EoD (Enemies of Diversity).”

Morales-Wade said his email was a satirical response to his frustration at discovering none of his white friends were on the Listserv.

“I wanted to highlight the ridiculousness of having a Listserv that was made for the purpose of excluding a specific demographic, especially by an organization who claims to act for the advancement of inclusivity and diversity,” Morales-Wade said. “If they really want to promote diversity and inclusivity, maybe don’t exclude a sizable portion of the Rice student body.”

However, not all students found Morales-Wade’s satire funny. Duncan College freshman Mezthly Pena said she thought his comment was “very unnecessary and definitely a misuse of the Listserv.”

Catherine Clack, associate dean of undergraduates and director of multicultural affairs, said in an email to the Rice Thresher on Tuesday afternoon that she had asked the Office of Diversity and Inclusion to completely shut the Listserv down “until they straighten out the mess.”

“I did not create that Listserv and certainly would never create a Listserv and just add students to it,” Clack said.

Joyce Chen, McMurtry College president, sent an email to McMurtry Tuesday evening explaining that the Listserv, which “consisted of students who self-identified as people of color, likely when we all applied to Rice,” had been shut down following student and staff complaints.

“Put simply, the idea that non-people of color can't be allies or ‘friends of diversity’ is dumb,” she said in her email. “It's not productive for any communities, nor does it promote tolerance or respect. It is antithetical to our values at Rice.”

This article has been corrected to better reflect Pena’s opinion given further context. Originally, the text introducing her quote read “However, not all students realized Morales-Wades email was satire.”

This article has been corrected to reflect the fact that the Listserv existed before Tuesday.