A golfer’s journey across the pond: featuring Jake Benson 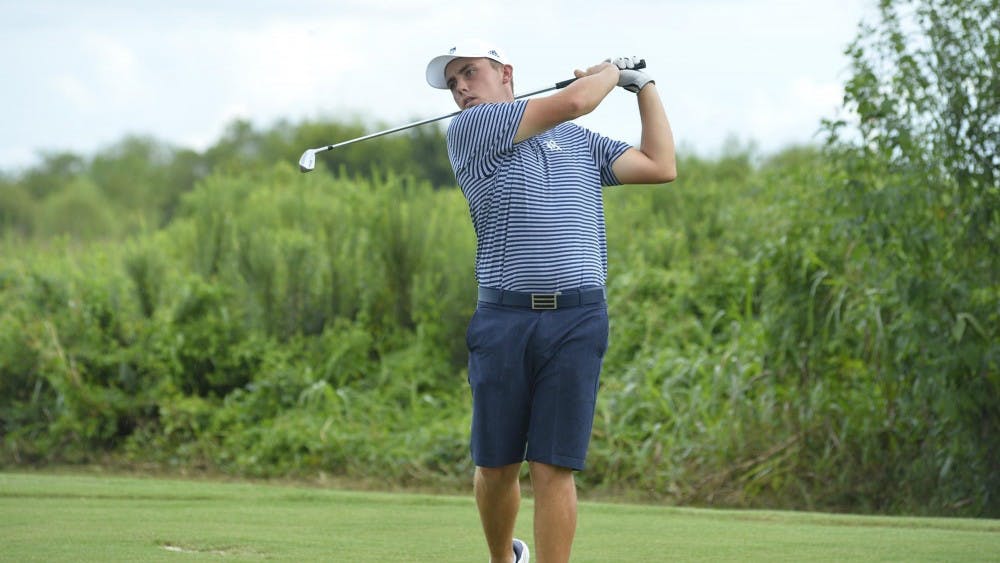 Sophomore golfer Jake Benson first picked up a club when he was five years old. Hailing from Nottingham, England, Benson gained experience playing in the British Isles, where the sport originated. Before coming to Rice, he attended the Open Championship — the oldest golf tournament in the world — seven times, visiting some of the world’s finest courses, such as St. Andrews and Royal Birkdale Golf Club. Growing up, Benson says that he took inspiration from one of Europe’s best-ever golfers.

“Sergio Garcia is the one for sure,” Benson said. “He shows passion and emotion. His drive to achieve was a big factor in my [playing] progression.”

Benson said he first knew he wanted to play college golf in the United States around the beginning of high school. According to Benson, more and more golfers from the United Kingdom have been coming to the U.S. to play at the collegiate level because of the high-level competition available.

While many coaches recruited Benson, Rice head coach Justin Emil was the first to see him play at the British Boys Amateur Championship — and ultimately won the competition for his signature to commit to the school. According to Benson, Rice’s academics and Emil’s interest made his choice easy.

“Coach Emil sent me an email soon after that [tournament] and just showed his interest,” Benson said. “He was very complimentary of me and he seemed very nice and sort of stood out from the rest of the coaches.”

Benson said that his consistency stands out as a strength in his game.

“It’s not very flashy, but I keep the ball in play a lot of the time,” Benson said. “I’m pretty accurate off of the tee. Just keeping it in play in course management is probably the strong part of my game.”

Now in his second year with the Owls, Benson has lowered his scoring average from 75.6 to 73.1 to lead the team for the year. He has two top-10 and four top-20 finishes this season. Emil said that coming from across the pond was a barrier to Benson’s success when he arrived at Rice, but that he has settled in well since then.

“It took him about a semester to get his feet under him here because you can imagine the adventure of going to school thousands of miles away,” Emil said. “But he’s improved his confidence as a player over the last year and a half. He’s kind of verified that by playing really well in some really good tournaments and posting some really great finishes.”

Even with Benson’s success, the Owls have struggled this year. Benson said that even though matches haven’t gone their way this season, Rice can still turn it around with two tournaments left to play.

“Even if we just improved by one or two shots per round each [player], that can be a massive difference in college golf with the team format,” Benson said. “So I say it’s only small changes that we need to make and I’m sure we can improve massively upon the results we’ve had.

Despite the Owls’ record, they have gone up against some of the best competition in the country, including No.1-ranked Oklahoma State University and OSU’s Matthew Wolff, the No. 1 golfer in the country. Benson said he learned from Wolff when he saw him play.

“We were on the range, and I stopped my warmup and watched Wolff for a bit just to learn something from him and see what he’s doing differently [from] everyone else that makes him so good,” Benson said.

Benson said he has ambitions of playing professionally. Two seniors from last year’s team, Mitchell Meissner and Mario Carmona, are currently playing on the PGA Tour Latinoamérica, one of the developmental tours for professional golfers. According to Emil, Benson’s potential is sky-high.

“I think that he could be a top-ranked player in Division I college golf,” Emil said. “As he continues to build confidence and clean up some things about his game, he could definitely be one of the best golfers to ever play at Rice.”

The Owls’ next tournament comes April 15, when they host the Bayou City Collegiate Classic at Golfcrest Country Club. The next week, they will compete in the Conference USA Championships.