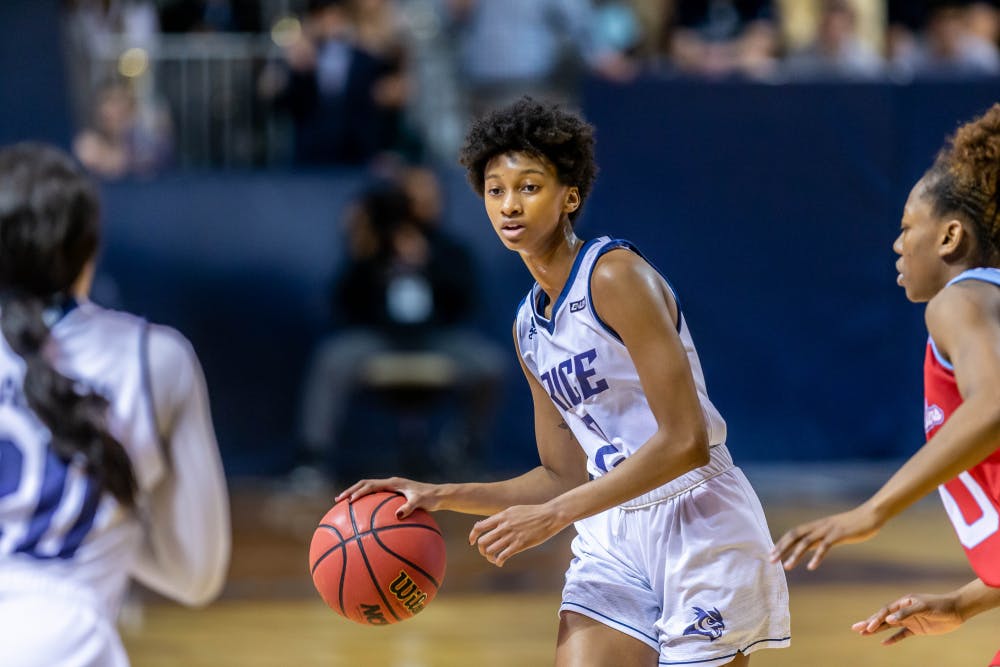 It was a Senior Day to remember for the Rice women’s basketball team. A record crowd of 2,606 fans at Tudor Fieldhouse watched the Owls defeat Louisiana Tech University 78-42 to complete Rice’s undefeated 13-0 home record, and increase the team’s winning streak to 17 games.

Rice honored its four seniors in a ceremony before the game: forwards Nicole Iademarco, Shani Rainey and Olivia Ogwumike, and guard Lauren Grigsby. Iademarco was the star of the show during the game, tying a career-high with six 3-pointers made, on just eight attempts. Junior guard Erica Ogwumike also played a prominent role, registering a double-double with 18 points and 14 rebounds. Iademarco said that on the whole, the day was a great success.

“I couldn’t ask for a better day,” Iademarco said. “Just super thankful for the people we have. After the game, all of our family, old Rice players, our scout boys, everybody was on the court with us and it was really cool to see the whole Rice basketball family come together.”

With the Owls’ defensive effort during the win, they improved their scoring defense to No. 6 in the country this year at just 53.2 points allowed per game. Rice is also No. 11 in defensive field goal percentage, holding opponents to just 35.1 percent shooting. It’s clear that defense has been a major calling card for the Owls this year. But Erica Ogwumike said that the results of Saturday’s game shows the result of Rice clicking on both ends of the court.

“I think we definitely play well when we defend well,” Erica Ogwumike said. “But I think we were also locked in offensively today. I think what really propelled us today was [that] we were balanced on both ends, offensively and defensively. I think everybody was truly locked into the gameplan, and we still had fun while we were doing it.”

Rice now has one more game left in the regular season before the team turns its sights to the Conference USA Tournament starting March 14. A victory in the tournament would give the Owls an automatic berth in the NCAA Tournament, but given Rice’s high standing in the rankings (No. 24 according to The Associated Press and No. 31 in RPI), it could potentially gain entrance as an at-large bid without the conference tournament victory. However, head coach Tina Langley said the team isn’t concentrated on that prospect yet.

“Our focus all season has been [that] the game in front of us is the biggest game of the year,” Langley said. “If we start looking at the tournament [now], then we’ve lost who we’ve been all season. So I don’t think that this team will look past the next opponent.”

That next opponent is the University of Texas, San Antonio, whom the Owls face on Thursday at 7:00 p.m. in their final regular-season game. If Rice wins, they will set a new program record with 25 wins in a single season. After that, the tournament beckons.