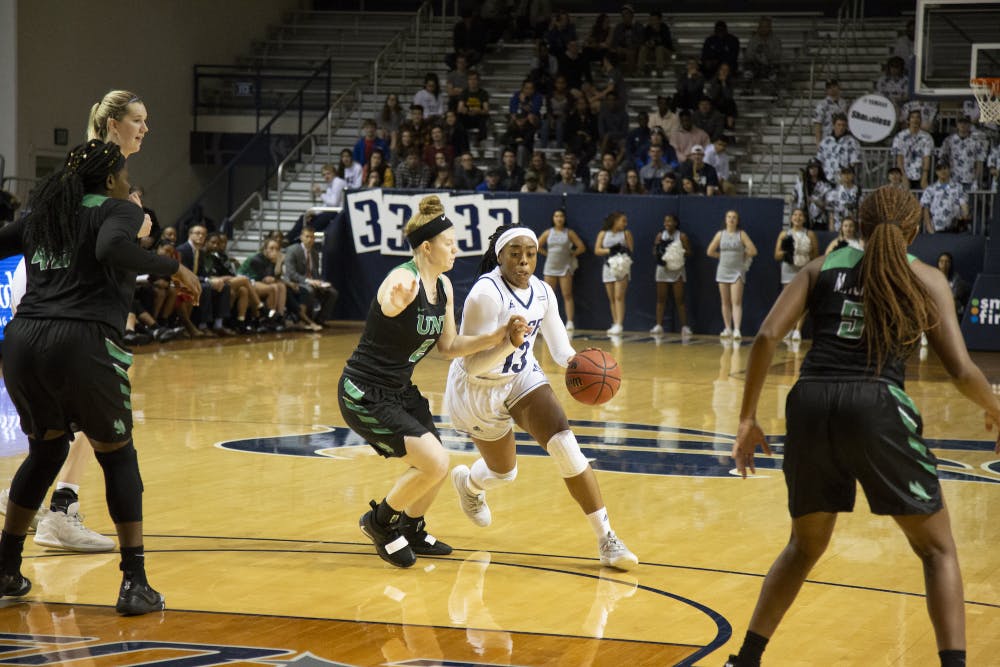 Rice women’s basketball led wire-to-wire in a 61-43 victory over the University of North Texas in the quarterfinals of the Conference USA basketball tournament. The Owls will take on Western Kentucky University in the semifinals Friday evening.

Sophomore center Nancy Mulkey led the way for Rice with 20 points and six blocks. She finished  plus-17 during her 24 minutes despite leaving briefly to get treatment on her back. Junior guard Erica Ogwumike added 15 points and 10 rebounds and led the team with a plus-18 plus/minus. Ogwumike said Mulkey helped the Owls counter the tough Mean Green defense.

“They definitely have a scouting report and play with a lot of heart,” Ogwumike said. “It’s a theme for them. We saw that passion again. They wanted to be aggressor and come out hard and they did, but once we adjusted, our offense started flowing better and we got ball into Nancy.”

Senior forward Nicole Iademarco opened the game with a 3-pointer on the Owls’ first possession, and Rice never relinquished the lead. The Owls led 18-13 at the end of the first quarter and padded the lead to eight by halftime. Rice extended its lead to double-digits on an Ogwumike layup with 4:23 left in the third quarter and eventually led by as many as 21 points. After the half, the Mean Green never cut the Rice lead below seven points.

Despite the blowout victory, Rice turned the ball over 17 times, leading to 20 North Texas points on the other end.

This game marked the sixth consecutive game in which the Owls held their opponents below 50 points. Head coach Tina Langley said she felt defense carried the team to victory.

“I’m proud of the way we defended today,” Langley said. “I thought we got better in the second half and played our game plan better in that half. Like I told them, it took us a little bit to settle in. We haven’t played a game yet here so we settled in and played the way we want to play.”

Rice will take on No. 4 seed Western Kentucky, who beat Old Dominion University 74-60 Thursday, in the semifinals on Friday evening at 5:30 p.m. Central Standard Time. The game, which will decide who advances to Saturday’s C-USA championship game, will be broadcast on Stadium. The Owls defeated the Hilltoppers 68-46 on the road on Feb. 7.