thank u, next: Rice to take on Marquette in first round of NCAA tournament 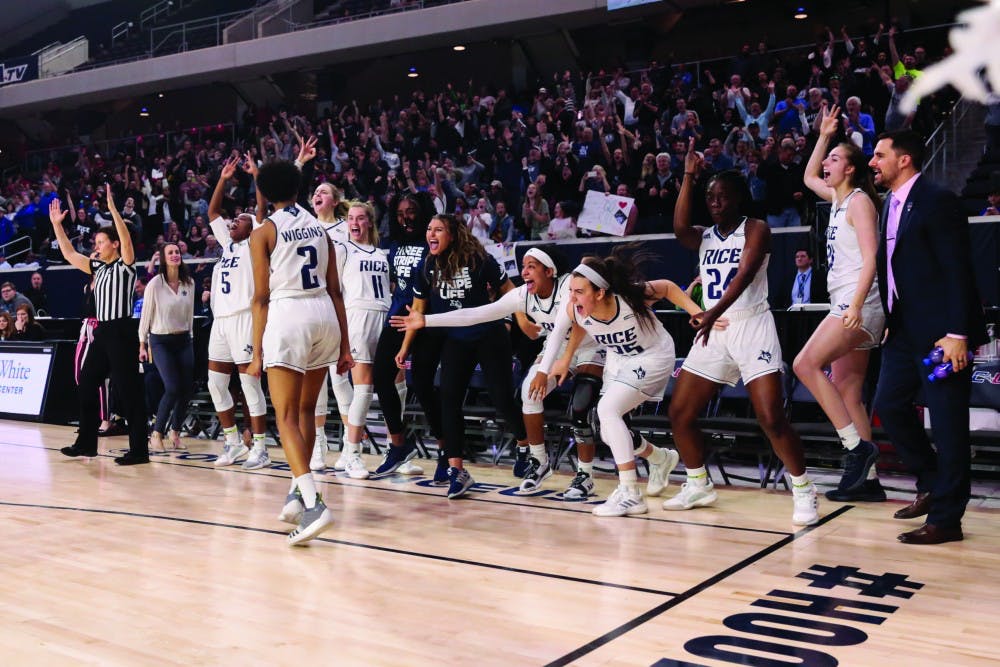 The regular season and conference tournament champion Rice Owls are headed to the NCAA tournament for the first time since 2005. Even though the Owls moved up three spots in the Associated Press poll to No. 21, they were selected as the No. 12 seed in the Chicago region of the tournament bracket. In its first-round matchup, Rice will face Marquette University, the No. 5 seed, in College Station on Friday.

In the quarterfinals, the Owls took on the University of North Texas, cruising to a 61-43 victory. Next, in the semifinals, Rice faced Western Kentucky University. Junior guard Erica Ogwumike, the newly crowned C-USA Player of the Year, carried the Owls to a double-digit-deficit comeback victory, winning 64-57. In the championship game against Middle Tennessee State University, the Owls again found themselves down at the half. However, in the second half Rice outscored the Blue Raiders by 23 points en route to a 69-54 win. Sophomore center Nancy Mulkey was named the tournament’s most valuable player, her second award of the week: just a few days earlier, Mulkey was awarded C-USA Defensive Player of the Year Honors. According to her, the championship victory was particularly meaningful.

“It’s definitely been an honor to break multiple records this year and to finally be playing in the postseason again,” Mulkey said. “To give that back to this university, to our fans, our coaching staff, my teammates: it means a lot.”

Now the Owls will face one of their toughest tests of the season. Marquette is currently ranked No. 18 in the country in the AP poll. The Golden Eagles play in the Big East conference and won the regular season conference championship before falling in the championship game of the conference tournament against DePaul University. The team’s record sits at 26-7, while its record in conference play sits at 15-3. Marquette played a tough non-conference schedule, squaring up (and losing) against two of the top-10 teams in the country in the University of Notre Dame and Mississippi State University.

“I think that we have very tough competition in Marquette,” Langley said. “[They are] an extremely talented team that can score a lot of points [and] defends very well. It’s going to be a tough game ... Marquette is a very experienced team. They start four seniors, they’ve been in the tournament [and] they’re incredibly well-coached.”

Some national experts believe that even though Rice is a double-digit seed, the Owls cannot be overlooked. ESPN’s Graham Hays said he believes Rice is better than its seed would suggest, and Mechelle Voepel, also of ESPN, picked Rice as her tournament Cinderella. According to Ogwumike, the Owls aren’t paying too much attention to seeding.

“You can only control certain things,” Ogwumike said. “At the end of the day, all we can do is focus on ourselves. I think we’re going to take [our] matchup and run with it, because we also know that numbers don’t mean a lot. The number right in front of your name — the seeding — doesn’t mean much once the game starts.”