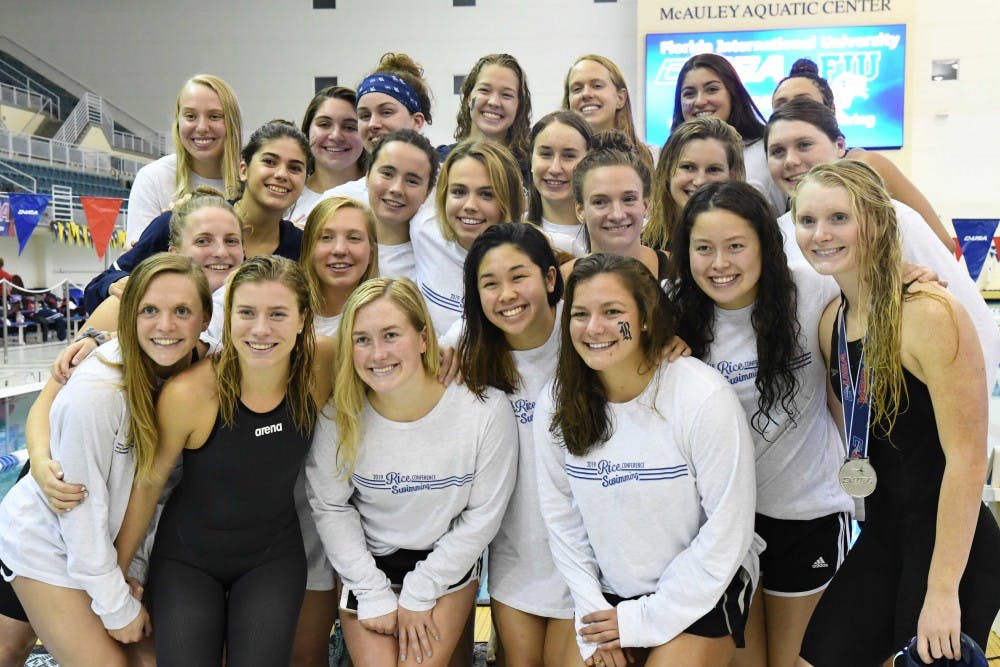 The Rice swim team poses for a picture after their second-place finish in the Conference USA Championships on Saturday, Mar. 2

After four straight days of swimming at the Conference USA Championships in Atlanta, Rice narrowly finished second behind a Florida International University team that won its fifth straight C-USA Championship.

However, the Owls left Atlanta with their fair share of accolades. Senior Marie-Claire Schillinger added to her already impressive collection of hardware in her Rice career. Schillinger qualified for her third straight NCAA Championships appearance by winning the 200-yard breaststroke, where she finished with a finals time of 2:09:67, which set a new Rice program record. She also qualified in the 100-yard breaststroke competition.

Head coach Seth Huston said he was proud of the team’s second-place finish. “We stayed focused on ourselves and no one else and made the meet far more interesting than anyone had expected,” Huston said.

Rice finished the meet with 872.5 points, 63 points behind first-place FIU. The gap between Rice and third-place University of North Texas was 350.5 points, greater than the difference between UNT and last-place Old Dominion University.

The Owls began day one of the C-USA Championships with a second place finish in the 200-yard medley relay with a finals time of 1:38.70 behind FIU. In addition to a strong performance in the 200-yard medley relay, the Owls outperformed all of the competition in the 800-yard freestyle relay after a final time of 7:07.77, which was also a Rice record.

Sophomore Ellery Parish highlighted the Owls’ performance on day two after finishing first in her event. Parish won the 500-yard freestyle with a final time of 4:44.09. In the 50-yard freestyle, junior Kate Nezelek took third with a time of 22.92.

The Owls also dazzled in the 200-yard freestyle relay. Rice’s team was aided by Cano-Minarro  who helped the relay team to a first place finish with a final team time of 1:31.10.

While the Owls posted impressive times in day two to pull themselves within striking distance of first place, day three proved to be even better.

Parish finished first in the 200-yard freestyle while two other swimmers tied for second in the event. Schillinger also had a first place finish as she finished with a final time of 59.68 in the 100-yard breastroke. Even though Rice outpaced FIU in first place finishes, the Owls remained in second place after day three.

While Rice was not able to pull ahead of FIU on the fourth and final day, the Owls set multiple records on day four. Schillinger’s aforementioned first place victory. As Schillinger heads off for her final collegiate swimming meet,  Huston said although she has accomplished much, she still has room to grow.

“Marie-Claire is just beginning to find out how great she can really be,” Huston said.

Parish also added her name to the Rice swimming record books as she swam an Owls record time of 1:56.75 in the 200-yard backstroke. The Owls had three of the top four finishers in the 200-yard butterfly. Sophomore Lindsay Mathys led the way for the Owls, with her first-place showing in a time of 1:58.59. Mathys’ mark was the second-best 200 fly time in Rice swimming’s history. Senior Rabea Tzenetos added a second place in the 100 backstroke to contribute to the team‘s second place finish.

Huston also walked away with a coaching accolade, winning his fifth C-USA Coach of the Year award. According to Huston, the team deserved credit for the award, not him.

“While we did not win the meet, the [coaching] award was a bit of recognition to how well the team competed this weekend,” Huston said.

The Owls will now return to Rice’s own competition pool to prepare for the CSCAA National Invitational, which begins March 14 in Cleveland, Ohio.

This piece has been updated to reflect that this will be Schillinger’s third, not fourth, year at the NCAA Championships and Evans tied for fifth, not first, in the 50 free.