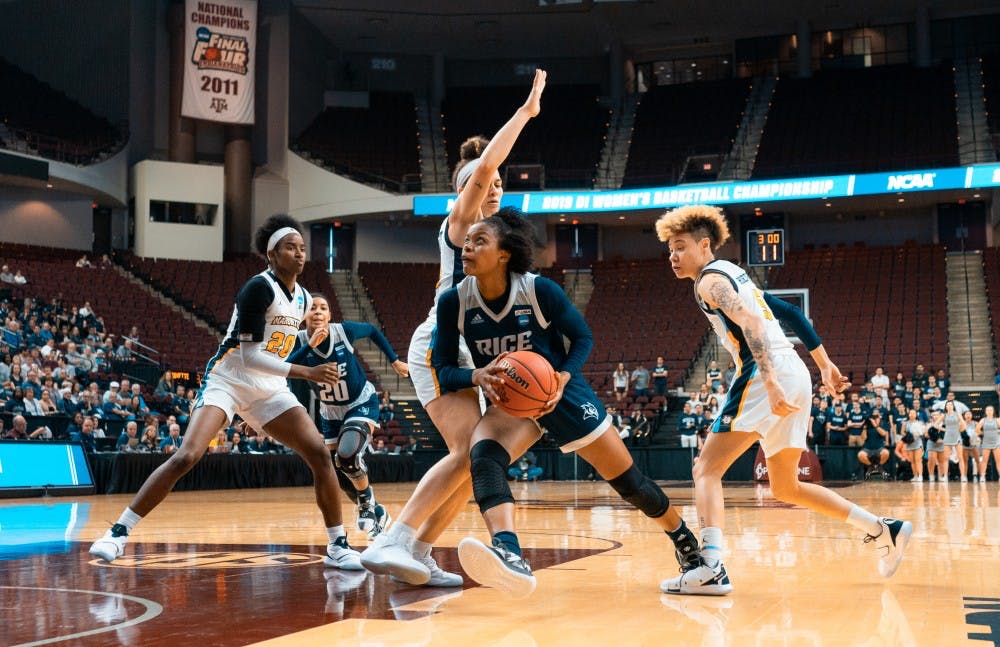 In a close-fought game, Rice women’s basketball lost in overtime to Marquette University, 58-54. The Owls led by as many as nine points with just under four minutes remaining in the fourth quarter, but scored just two points in the next nine minutes of play (including overtime), allowing the Golden Eagles to complete the comeback win. With the loss, Rice is eliminated from the NCAA Tournament, ending its historic season.

Head coach Tina Langley said despite the loss, she thought the Owls’ effort was excellent.

“Really proud of our student-athletes and how they battled,” Langley said. “I thought they did a great job executing. There’s a few things we could have done differently but [I’m] really proud of not only this game, but of the season and how hard [the team] worked all season.”

Junior guard Erica Ogwumike got the Owls on the board first in the opening quarter, swishing a corner three to give Rice an early 3-0 lead. Freshman guard Jasmine Smith added another three shortly after, and a suffocating Owls defense held Marquette to just eight points in the first quarter. Mulkey featured prominently in Rice’s first-quarter attack, with four points and one block. After one quarter, Rice led 12-8.

But Marquette came out blazing in the second quarter, scoring five quick points to take the lead. Rice’s offense hit a hitch, turning the ball over four consecutive times as part of a nearly four-minute scoring drought to begin the quarter. Mulkey finally broke the Owls’ scoreless streak with a layup at the six minute mark before Marquette senior guard and top scorer Natisha Hiedeman hit a deep three to increase the Golden Eagles’ lead to four. But the Owls fought back on the strength of Ogwumike’s aggressive play inside: she banked in a layup before drawing contact at the end of the shot clock to go to the line. However, her aggression came back to bite the Owls after she was whistled for two offensive fouls on consecutive plays, forcing Langley to take her out of the game. Both teams continued to struggle from the field, hitting just eight combined field goals in the quarter. A Mulkey layup put the Owls back on top before Marquette stole the ball in the waning seconds of the half, laying it in to take a 20-19 lead into the break.

It was all Nancy Mulkey at the start of the second half. First, she kissed a post shot off the glass to give Rice the lead. Mulkey then blocked three consecutive shots on the other end before scoring again to make the score 23-20 in favor of Rice. An Ogwumike layup then increased the lead to five. Marquette finally scored on a transition layup to break its six-minute scoring drought before sophomore guard Sydne Wiggins and Marquette senior guard Allazia Blockton traded three pointers. Rice struggled with turnovers and giving up offensive rebounds at the end of the third period, but fended off an energetic Golden Eagles offense with some buckets of its own to finish the quarter with a 37-35 lead.

According to Ogwumike, the Owls mostly did a good job navigating Marquette’s pace of play during the first three quarters.

“I think all in all we did a pretty good job negotiating their pressure and their tempo,” Ogwumike said. “At times it was fast-paced, which is what they like. And at times we had pace, which is what we like in our offense.

Smith got Rice started in the fourth quarter by blocking Marquette’s first field goal attempt of the period, followed by an Ogwumike three-pointer to give the Owls a five-point lead. But the Golden Eagles followed with a 4-0 run to cut Rice’s lead to one with 7:46 remaining and force a Langley timeout. Rice continued to fight in the paint as the quarter progressed, with two Mulkey layups and four points by Ogwumike helping to give the Owls a seven-point lead at the 3:55 mark. Ogwumike then added a jumper from the top of the key to increase the Rice lead to 52-43 before Blockton answered with a three to cut the lead to six. A pair of Marquette free throws made it 52-48 before a combination of Owl turnovers and controversial foul calls enabled Marquette to tie the game with just over a minute remaining. Mulkey missed a runner on the Owls’ next possession, but Hiedeman’s subsequent three-point attempt was blocked by Mulkey with less than a second left, giving Rice a chance to break the tie. However, senior forward Shani Rainey’s buzzer-beating attempt was just off, sending the game to overtime.

Ogwumike missed a layup to begin the overtime period, and senior guard Amani Wilborn of Marquette then hit a jumper to give the Golden Eagles a 54-52 lead. Rice ran its offense through Mulkey, but she missed all four of her overtime shots. Blockton hit a contested layup to take a four-point lead with one minute remaining, followed by a quick Ogwumike hook shot on the other end to cut the lead to two. But Smith committed an ill-advised foul that allowed Marquette to run down the game clock to under ten seconds. Though the Golden Eagles missed their ensuing shot, they got the offensive rebound, forcing the Owls to play the foul game. Unfortunately for Rice, Hiedeman converted on both free throws to seal the game.

According to Langley, Rice lost its rhythm near the end of regulation and in overtime.

“When it came down to executing down the stretch, we were trying to get into hand-off situations because we didn’t feel they had been guarded well,” Langley said. “We rushed a few things. I think we lost a little bit of our patience in those moments where we had been patient earlier and waited later in the shot clock to make those decisions. So I thought that we could have done a better job of trying to get into the situation we wanted out of the set.”

Ogwumike said the Owls lost their early-game mindset as the game progressed toward its later stages.

“It kind of got to us at the end that we were up nine,” Ogwumike said. “There were things we could have executed better. And we could have slowed the game down a little bit more at the end. I think a lot of the things that we messed up were in our hands.”

Overall, Rice held Marquette, the No. 5 scoring offense in the country, to just a 33.8 percent mark on field goals, 17.4 percent mark on 3-pointers and 58 total points, which is more than 24 points below the team’s season average. But the Golden Eagles secured 16 offensive rebounds and forced 19 Owl turnovers, allowing Marquette to take 10 more shots over the course of the game. Ogwumike and Mulkey finished as the Owls’ top two scorers, with 22 and 18 points respectively.

Overall, Langley said Rice can take away several important lessons from the loss.

“You look back and you can see a lot of things that we need to improve on, and that comes down to us making sure we’re more prepared,” Langley said. “I know I could have done a lot of things differently down the stretch that could have helped [the team]. And so we’ll be more prepared in the future. I think the future is very bright...This is a very young and really talented team. So we know that we can continue to compete at this level for a long time.”