Conversations with The Daily Show correspondents 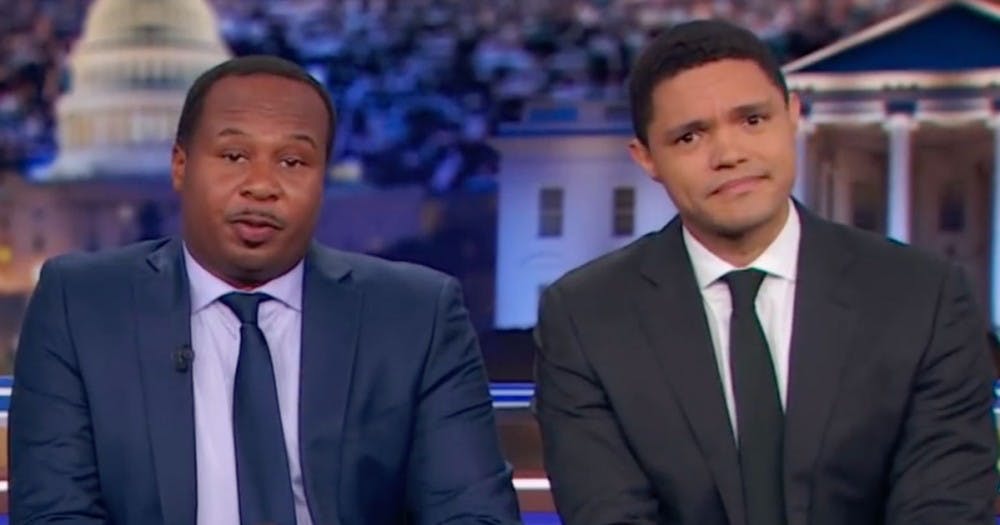 Roy Wood Jr. and Jaboukie Young-White are correspondents for the self proclaimed “World’s Fakest News Team,” The Daily Show. Wood has served as a correspondent for this late night news satire show since 2015 and often tackles race-related issues. Young-White is the newest and youngest Daily Show correspondent, and just as importantly, has over 300,000 Twitter followers. I was able to catch them for a few minutes during the opening of the Donald J. Trump Presidential Twitter Library, a satirical art installation dedicated to Trump’s most ridiculous tweets.

The night before the interview, The Daily Show correspondents performed at a stand-up comedy show which Wood hosted. I began talking to Wood about the show the previous night and his experience as a host.

Lavina Kalwani: Is hosting standup something you enjoy doing?

Wood: Hosting is one of those things you have to do when you start out [performing stand-up], so it’s just a muscle that never leaves. You want the show to flow nicely and for everyone to have a good time so why not host? When you get to perform with your friends, hosting is not a chore.

Kalwani: I had a question related to your coverage when you went out in more rural areas and looked at rallies that were more right-leaning in terms of —

Kalwani: Yeah! Obviously, that’s a very serious issue portrayed in a humorous way, and in that depiction there was a lot of irony cast towards the people at those rallies. But what did you see that gave you hope for a future where people better understand these issues or think through these issues more logically?

Wood: What gives me hope is that the goal of both sides, especially on the gun control issue, is safety. It boils down to two different groups having a different idea of what would create the safest possible environment for them and this country. One group says “no guns” and the other group says “yes guns,” but they both [say] yes and no on the grounds of safety. Also, there are a lot of level-headed people on that side of the issue.

You know, we tend to point the camera and give the most attention to the loudest, most ignorant opinions, but there are a lot of people that are pretty centrist on both sides, and I think we are much closer to being on the same page on a lot of issues in this country— a lot closer than I think is always shown in the news coverage of those issues. That was the biggest takeaway that I got from anytime that I talk to people on the right. I think that’s something that there should be more of.

Kalwani: And going alongside that, how do you balance your own personal opinions of different hot topic issues with what The Daily Show wants you to represent in the media?

Wood: Well, I think the one thing that Trevor [Noah]’s always given us freedom on is to cover the stuff that we’re interested in, the stuff that we have a vested opinion of, because if you care about it for real, then that’s going to show within the piece. If I’m covering race or [correspondent] Desi [Lydic]’s covering women’s rights, there’s just more of an inherent … juice to the piece, so to speak. I’d say that, as far as I know in The Daily Show’s history, we’ve never been asked to cover a story from an angle with which we don’t agree. Period.

What we have been asked to do sometimes is cover stories that I didn’t know shit about and didn’t care about until I was actually doing the research for the story and I go, “Oh this is worthwhile and interesting.” We did a story on the Army Corps of Engineers and how much money is wasted by our government building a bunch of concrete structures, digging up land and terraforming that does nothing for the environment. And that’s something that you don’t really hear a lot about. It wasn’t my pitch, but the story was pitched to me and I went “Army moving dirt? Who cares?” [to] “Ohhh, this is interesting.” I’d say the biggest ask is sometimes covering stuff that’s outside of your core circle of interest. But even when you do that there’s still fun.

Next, I interviewed 24-year-old Daily Show correspondent Jaboukie Young-White, whose popularity began through his comical Twitter account and evolved into standup.

Kalwani: One thing that really made me curious about your journey to where you are now is your age. What outlook does that give you on a national stage that’s different than the way a young person would work on maybe a local or state level? Just because so few people on the national [stage] are as young as you are, you know?

Kalwani: So you have a much bigger say on the voice of the young people, I guess.

Young-White: Right. I feel like there’s a lot of translating that needs to be done. There’s a huge gulf of information between young people and [others] right now just because online, information moves so quickly. There’s so many things that I’m like, “Well yeah that thing, that’s like three months ago, that’s old news,” [and other] people are like, “I’ve never heard of this in my life.” So I find that it’s a lot of me translating just cultural things [in the] rooms that I’m in.

Politically, I find that I have to impart a real sense of a lack of future that young people feel and how that is affecting our political views. At least [to] me and a lot of my friends, [we] are not really about gradual change, [like] centrist politics is and has been. We’re ready for new, revitalizing voices like [Reps.] Ilhan Omar and Alexandria Ocasio-Cortez. They’re two people who really are speaking to a lot of what young people, that I know at least, want.

Kalwani: How do you balance your perspective and personal opinions on issues, which are a lot of times different than other generations, with the work that you are required to do? And just balancing your opinion with what The Daily Show wants you to represent and go for?

Young-White: It’s understanding, okay, this is where I’m at, but I need to have this ideological basis to work from so [that] I can create new stuff from that point of view. I just feel like in this point in my career, I haven’t really gotten a lot of my voice out yet. I’m still relatively new. I’m still working on setting up what people expect from me when I’m going to do something. So I can then take that in directions that I think are good and creative later. First, people have to know what I’m about to begin with.

Kalwani: [That] ties into my next question perfectly because as a college student, a lot of my friends — and myself included — are struggling to find our voice and stand up for what we believe in and really pursue that no matter what other people think. What is your take on that, like what is your advice to people our age looking to make their way and find that voice?

Young-White: I would say it’s trial and error. It really just comes with experimenting and trying new things. Figuring out what comes naturally, what makes you comfortable, what makes you uncomfortable in a good way. I think it’s important to be forgiving with yourself and realize that it’s not all going to come at once, you have to keep making mistakes and doing things to get to a point where you’re like, “Okay, now I know this is what I like, this is what I don’t like, this is what works for me, this is what doesn’t work for me.” If you just do things that perfectly fall within what you have envisioned for yourself, I find that you’re doing yourself a disservice.