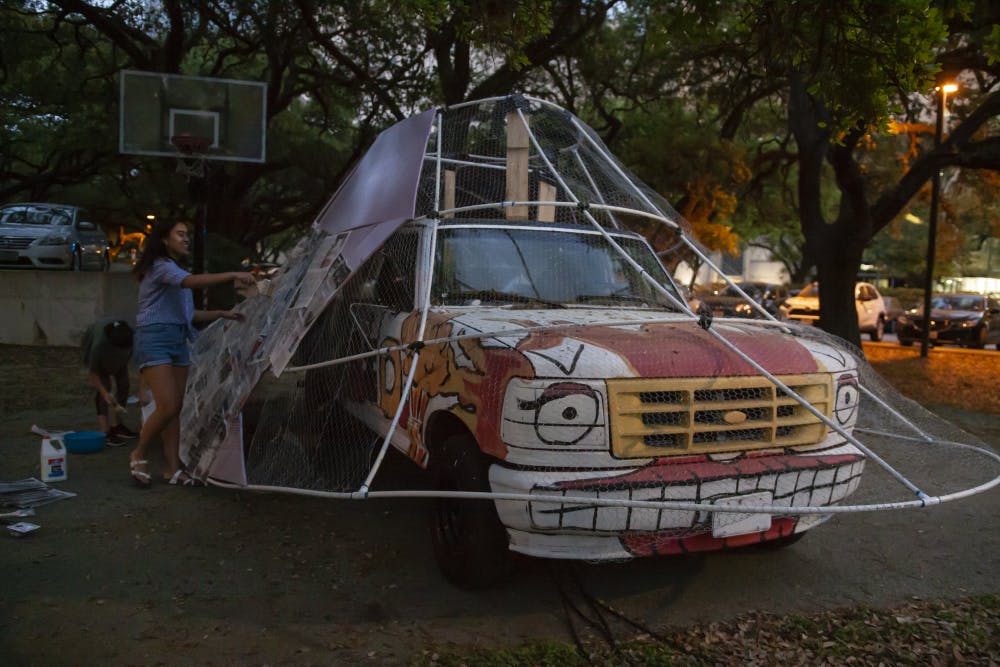 A volcano that erupts wine and Fireball and a massive bottle of Smirnoff are two phallic floats that will grace the parade from the water balloon fight to the Beer Bike track.

Sid Richardson float builder and junior Fern Horillo said the Sid team initially wanted to build a large penis for their “Earth, Wine and Fireball: the 21st Pint of September” theme but were shut down by the Beer Bike coordinators.

“We instead channeled our inner third graders and settled for a giant volcano,” Horillo said.

“This year we are continuing Hanszen’s long tradition of celebrating how well-endowed we are,” Liebster said. “With an endowment as large as ours, it’s hard to not flaunt it around.”

Liebster said the Hanszen float is built from chicken wire, papier-mache and a “healthy dose of hypermasculinity” and inspired by his dream.

“It came to me in a feverish and vivid dream from which I woke up drenched,” Liebster said.

Will Rice College will be building a less phallic float using IKEA furniture for its theme, “IKEA: Brew it Yourself”, according to float builder Juhi Parikh. The float is a “Biking Ship,” a Beer Bike viking ship.

“Our ship references IKEA, Sweden, Will Rice and sweeping,” Parikh, a Will Rice freshman, said. “The front of the float shows a biking ship and from the back an IKEA show room can be seen inside the boat.”

Float builder Adam Subel said the Jones float focuses on the carnival aspect of the theme, “Travis Scotch: Smashtroworld,” and will take the form of a ferris wheel that is purple for Jones and black and gold for outer space.

“[I wanted] to find something unique and dynamic that did not require papier-mache,” Subel, a sophomore, said. “For the past few years Jones had been relying on that, but it is very time consuming and doesn’t give a very clean aesthetic.”

Duncan College is building a giant cathode-ray tube TV with a mural of Cartoon Network characters to fit its theme. The TV will be 16 feet long and 10 feet tall, according to Duncan senior Cole Crawford.

Brown College is opting for a smaller build of the Mystery Machine from Scooby-Doo for their “Scooby Brew” theme. The main difference, according to sophomore Stephany Marchany, is that the the machine will be renamed the “Margarita Machine.”

Baker College will once again be pushing its “hell car,” a Baker tradition. Painter Julia Wang said she is painting Drake and Josh on the car’s hood to fit this year’s theme of “Drank and Josh: Chug Me Brotha.”

“We usually spray paint fire at the bottom edges of the hell car, but this year we’ll be painting the splashes from the Nickelodeon logo instead to reflect the theme,” Wang, a senior, said.

Also keeping with tradition, Wiess College will push its “war pig” float, which will be repainted with an arrow to fit the “Avatar the Last Bartender: Master of All Four Lokos” theme, according to sophomore Carlos Tafur.