An inside look at Willy Week across campus 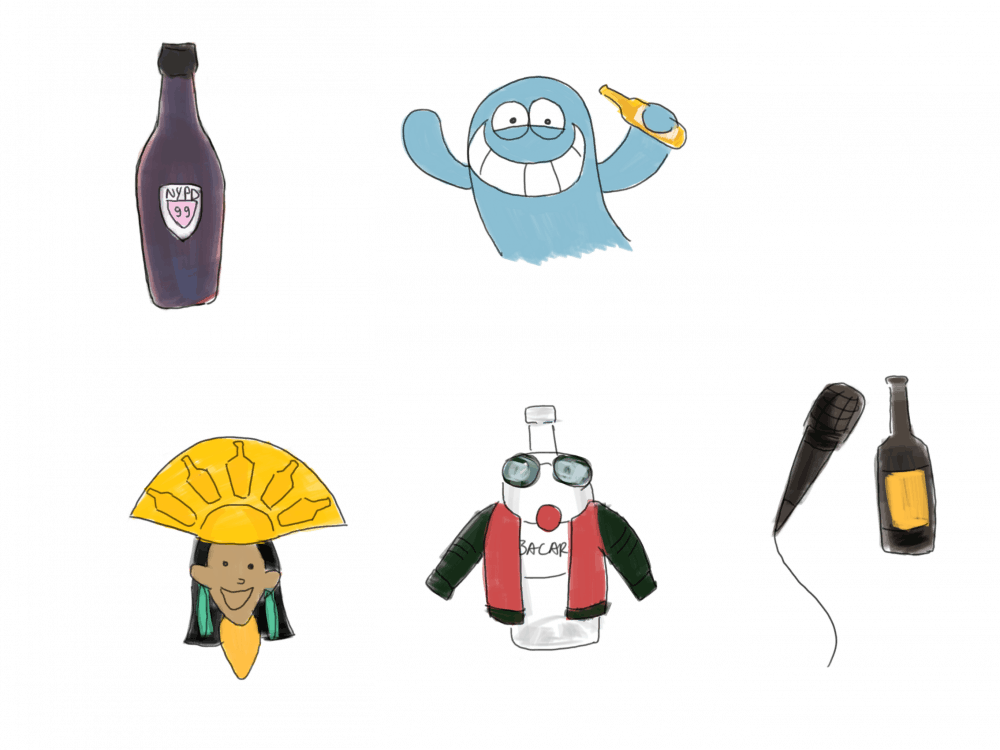 Martel is continuing its tradition of having a build on the college grounds, Carr said. This year, the build represents different scenes from The Emperor’s New Groove. Carr added that the coordinators have been trying to get as many Martelians as involved in Willy Week as possible through new committees that help out on relevant matters.

As far as how their bike and chug teams are doing, Carr said we’ll have to wait until Saturday to find out.

“What I do know is that we have a varied roster of both people who have loved being involved in the past and newcomers alike,” Carr said, “and they’re working hard to make Martel a threat this year.”

Will Rice College — BIKEA: Brew It Yourself

Will Rice chuggers and bikers have been working day and night in preparation for Saturday, according to Julia Coco, Will Rice sophomore and Beer Bike coordinator.

“Our bike and chug teams are amazing,” Coco said. “And of course, we have to give a huge shoutout to our pit crew.”

In addition to the typical Willy Week events, Coco said the coordinators have big plans for the night before the race.

Night Ride is the most beloved event during Jones’s Willy Week, according to Rohan Palanki, Jones College senior and Beer Bike coordinator.

“Jonesians paint up in our colors and squeeze into cars blasting music to do a victory lap around the inner loop,” Polanki described. “You’ll hear ‘All I Do is Win’ across campus, along with obnoxious horn honking and Jonesians practicing their victory chants for when we sweep the races on Beer Bike morning.”

The coordinators introduced some new events this year, including a bonfire the Sunday before Willy Week.

“Given the festival nature of our theme, we thought that s’mores, hotdogs and wacky haircuts would be a great way to get people excited for a set of Jones victories and the best Beer Bike yet.” Palanki said, and added that he anticipates “three dubs.”

This year, the Hanszen coordinators are introducing a class battle during Willy Week.

“We're doing a series of events — like a kickball game, a tug of war, and water balloon filling contests — that will give each class a chance to win points,” senior and coordinator Nik Liebster said. “At the end of the week, the class with the most points gets $250 in their class budget!”

In addition to the class battle, Liebster said Hanszen will be continuing many traditions, such as filling more water balloons than any other college, building a penis float and building a wall between Hanszen and Wiess to “keep those rat bastards from ruining our fun.”

Hanszen's bike and chug teams look incredible, according to Liebster.

“Time trials were very successful yesterday, so we are [excited] to dominate at the races,” he said. “Our captains are absolute superstars, and we couldn't be more proud of their commitment and preparation for this week.”

Lovett College — Barcardi McFly in “Back to the Brewture”

Due to last minute medical concerns, Lovett’s womens bike team might be entering Beer Bike without a biker. According to Natalie Siejczuk, Lovett College sophomore and Beer Bike coordinator, they might have a biker race twice.

“There’s also a high chance of [a] Beer Run,” she added, “in which case we will have a full team.”

Despite the setback, Siejczuk said Lovett is having an otherwise good Willy Week. They kicked off the week with a midnight toast last Sunday, and are looking forward to a mock bike with Wiess among other activities.

To match, Bhoi said McMurtry is putting a build inspired by the Brooklyn Nine-Nine bullpen in their quad — but with beer pong tables instead of desks.

In addition to the traditional build, McMurtry has been planning a new event this year called Conchella, where student bands will play in the McMurtry quad, Bhoi said. They will also be participating in a North College capture the flag.

The college is very excited for their bike and chug teams, according to Bhoi.

“We think [the teams] will probably be the best McMurtry has ever had!” he said.

Baker College went with a throwback this year with their Disney-inspired theme.

“We felt that this theme carries elements of [the] carefree fun of our generation’s childhood, which we hope to bring to Beer Bike and Willy week,” Emily Roy, a Baker College Beer Bike coordinator, said.

The coordinators are adding a new tradition this year: a Jello Scoot with Wiess. According to Roy, the Jello Scoot is like mock bike, but with scooters instead of bikes and jello to chug instead of water.

“Our bike and chug teams look better than ever — especially our men’s bike team,” Roy said. “They have all been practicing long and hard, and we hope their hard work pays off. Whether they win or not, we are still proud of them.”

“We think the theme really brings out the childhood nostalgia in many of us, while also being fun and family-oriented, and a little retro, too,” Rork said.

Brown is marking Beer Bike this year with some special events to honor resident associates Jordan and Amber Szymczyk and college coordinator Nancy Henry, for whom this year is their last year at the college.

“Brown will be honoring Nancy on Friday with a party celebrating all she’s done for the college over the years, and we’ll be collaborating with [the Szymczyks] to host a special edition of their weekly I Tube YouTube We All Tube for Ice Cream [ITYTWATFIC].”

ITYTWATFIC is an event where Brown students submit videos for an hour long compilation to watch while eating Blue Bell ice cream and brownies, according to Rork.

As far as Brown’s showing on Saturday, Rork said that both the chug and bike teams have been training hard.

“We think that our times will reflect that on Saturday,” Rork said. “The chug team has a lot of new talent on it who are looking to impress, and we’re excited to see what they can do.”

“The throwback theme pays homage to ‘70s disco, the same decade that Sid was founded,” Bela Walkin, a coordinator and Sid Richardson College junior, said. “Much like Earth, Wind and Fire, Sidizens are, in the words of Rolling Stone magazine, ‘innovative, precise yet sensual, calculated yet galvanizing,’  and our Beer Bike will embody that,” Walkin said.

Walkin said that in addition to their traditional quad jack and Orc Raid, Sid will be playing music on Radio Free Sid for Willy Week.

“We’ll be blasting Radio Free Sid every day this week with a playlist by a different class of Sidizens every day of the week, all featuring the classic Back in Black by AC/DC as well as September by Earth, Wind and Fire to pay homage to our theme,” Walkin said.

According to Walkin, the bike and chug teams look “So. Damn. Good.”

“Keep your eye on Sid this year,” Walkin said. “You’ve never seen a team compete like this one before.”

“This theme is perfect  for our college because, like Foster's Home, there's a home for every Duncaroo at Duncan College, and something for everyone at Duncan Willy Week,” Masimore said.

According to Masimore, in addition to continuing a tradition of “having the best jacks of all the colleges,” Duncan will be adding a new tradition to the Willy Week roster: a Capture the Flag game with the North Colleges.

And when asked about the bike and chug teams?

Wiess--Avatar the Last Bartender: Master of All Four Lokos

Beer Bike coordinator Carlos Tafur said that the theme is inspired by the popular animated TV series Avatar: The Last Airbender, which is popular at Wiess.

The college kicked off Willy Week with a Weenie Roast on Sunday. The coordinators came up with events for the rest of Willy Week based on the elements of Avatar: earth, wind, fire, and water.

“Monday [through] Thursday each have a theme based on different bending elements, and we'll be having our Alumni BBQ on Friday,” Tafur said.

Tafur was evasive when asked about his outlook for the bike and chug teams.