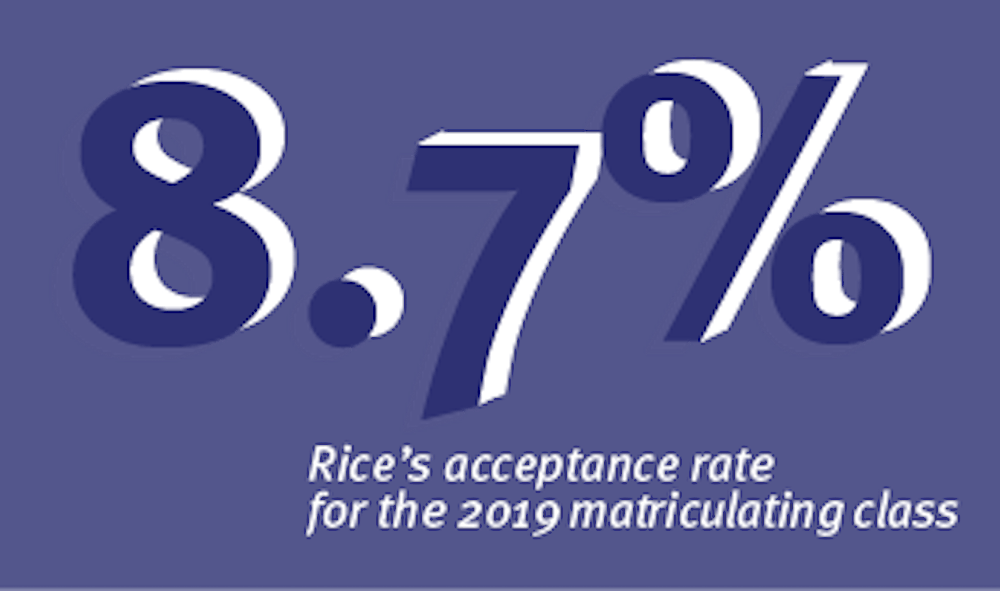 Rice University accepted just 8.7 percent of applicants in the 2019 admissions cycle, according to Vice President of Enrollment Yvonne Romero da Silva, setting a record for the lowest acceptance rate in the university’s history. In all, combining both regular decision and early decision applicants, 27,084 students applied and 2,364 were accepted.

Romero da Silva said the high number of applications followed the increased interest in Rice after the September 2018 announcement of the Rice Investment, which will offer full tuition scholarships for domestic students from families with incomes up to $130,000.

“We were already seeing an increased interest in Rice going in the admission cycle,” Romero da Silva said. “For some students, knowing upfront what their families would be eligible for in the way of financial aid made the Rice education more attainable. Scholarships to cover tuition for families earning up to $130,000 is a lot of money and goes a long way.”

In January, the university announced that applications to the matriculating Class of 2019 increased roughly 30 percent over last year. According to Romero da Silva, Rice experienced a greater increase in applications than other peer universities this application cycle.

Romero da Silva said that although the demographics of acceptance students are similar to that of last year’s, the incoming class may have a different demographic breakdown depending on who accepts Rice’s offer of admission. One notable exception was the amount of domestic students who applied, according to Romero da Silva.

“While we increased applications across nearly all demographics in the class, there were some areas where we saw even greater increases,” Romero da Silva said. “For example, applications were way up for domestic students both in and out of the state of Texas. This may result in slightly higher numbers of domestic students in the enrolled class.”

Despite the drop in acceptance rate, Romero da Silva said that the admissions office anticipates a similar yield to last year, when 41 percent of admitted students accepted their offers of admission.

Romero da Silva said she hopes the increased interest in Rice will continue into the future.

“We know that once students learn about the incredible offerings of a Rice education they are hooked,” Romero da Silva said. “If they make it to campus they can really see how amazing the community and environment truly is.”