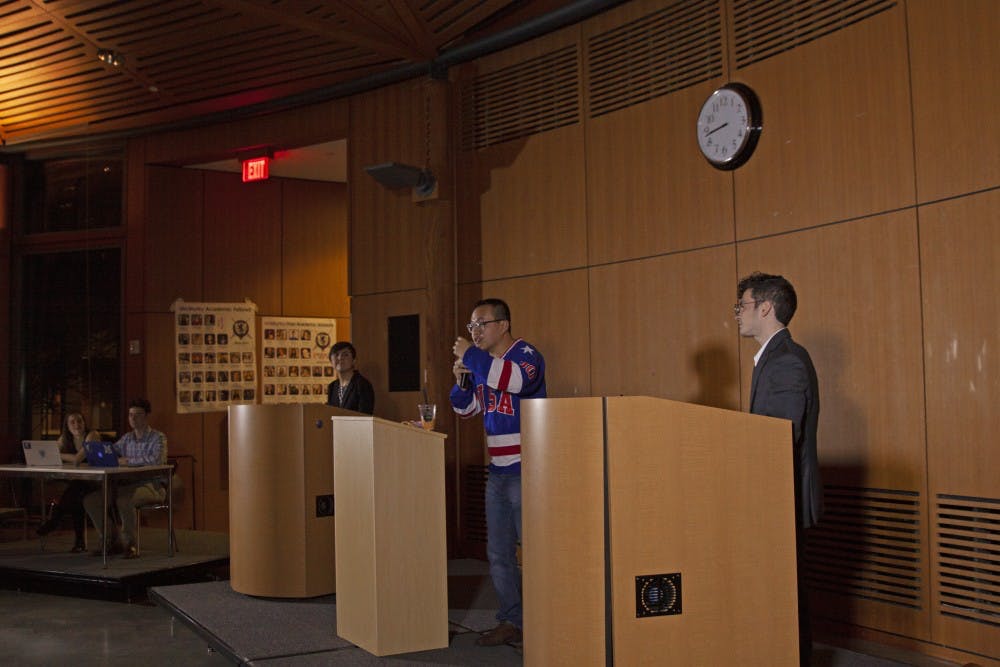 Grace Wickerson, a Brown College junior and current SA Internal Vice President, said they would focus on expanding educational access and opportunity, championing student ideas and building on their previous work in areas such as student wellbeing and sustainability through their past roles in the SA.

"For the past three years here, I have had the chance to work with several initiatives on campus, including STI [sexually transmitted infection] testing to the experience of first generation and low-income students on campus,” Wickerson said. “I've also worked with the SA to include those who aren't traditionally involved, mentor leaders who are focused on creating a community impact and build collaboration between clubs and departments."

Bill Duong, a Baker College senior, said he would address sustainability, inclusiveness, and wellbeing with his platform of bringing an end to 8 a.m. classes.

“Of course I'm gonna tackle these from an 8 a.m. perspective,” Duong said. “We have to figure out a way to reduce our carbon footprint, and a great way of doing that is to reduce the amount of time commuters have to spend in traffic.”

Frederick Cavallaro, a Will Rice College junior, said he became motivated to take the race “seriously” after current SA President Ariana Engles decided not to run.

“I decided, why sit around and complain about it when I can actually get something done?" Cavallaro said.

Although initially focused on a complete teardown of the SA, Cavallaro said his platform now focuses on amending the SA Constitution.

“I would argue that the Senate is speaking over the students, “Cavallaro said. “I feel like they have a little bit too much clout, and they have their way with pretty much anything, when it comes to proposing legislation and who can be on a committee or working group. There’s really no limit to how far or what they can do. That no limits attitude should apply to every undergraduate.”

When asked about how he would engage students to participate in student government, Cavallaro, whose platform is largely based on constitutional reform and returning legislative power to students outside of the SA, said there would be fewer working groups made under his presidency.

"Another part of my platform is to reduce the quantity of working groups and task forces created as well as redefine what exactly they are so that they better serve the student body, as opposed to just being created as a way to fill up a resume and then dissolve after a year,” Cavallaro said.

Cavallaro said he plans on resigning after improving the SA Constitution, and that someone else would be better suited to the job of creating solutions for specific issues.

The pattern of succession in the case of a president’s resignation is the IVP, followed by the EVP. Cavallaro said during the debate that he assumed both the IVP and the EVP would turn down the job.

Simi Rahman, the uncontested candidate for IVP, said to the Thresher that she is not interested in being the SA President, which she told Cavallaro after the debate. Will Mundy, who is currently uncontested in the race for EVP, said he “would not commit to the role of the SA President at this time.”

“The best scenario that I see as a result of this election is that I am elected, I implement these solutions, I resign, the IVP and EVP step down, we do a special election and then potentially Grace can run again and Grace becomes president,” Cavallaro said.

All three candidates responded to an audience question on how they plan to support survivors of sexual assault if they were to be elected president.

In their platform, Wickerson said they would also propose an optional social issues seminar for incoming freshman to explore paths in social justice early in their time at Rice.

“These classes provide a space for students of all majors, all disciplines to get together and talk about how do we actually solve these issues from multiple disciplinary perspectives,” Wickerson said. “What can an engineer bring to the table? What can a humanities major bring to the table?”

Neither Cavallaro nor Duong has prior experience in the SA. Duong offered a succinct answer as to why he is qualified to be president.

Cavallaro said the familiarity he had gained with the SA Constitution and its bylaws by reading them thoroughly in the past week has made him a qualified candidate for president.

“I have a question for any member of [the] Senate: have you read the entirety of the constitution and the bylaws, and how familiar are you with them?” Cavallaro asked. “I am beyond familiar with the constitution bylaws by virtue of me trying to find a way to destroy SA by a loophole. However, I've decided to take mercy on the Senate and actually fix it."

Wickerson responded to Cavallaro by saying the role of the SA president goes beyond merely proposing amendments.

“I think the idea of bringing legislation writing back to students and allowing them to submit legislation is a great idea,” Wickerson said. “But I would like to challenge you and say that the SA president is not just there to submit bylaws or specific constitutional amendments. They actually have to see those things through. That's the thing that I think I'm not sure yet if Freddy can do."

The Future of the SA

Following a student turnout of only 50 percent at the 2018 SA presidential election, the three candidates offered ideas for increasing turnout in the upcoming election.

Wickerson said they believed building personal connections between the students and the SA would strengthen student investment in the SA.

“I've started going around to different college commons and sitting down and having lunch with the students there,” Wickerson said. “I find that for me, a lot of one-on-one personal conversations make the SA feel not like the bureaucratic mess that some people are trying to make it out as.”

Cavallaro said he blamed low voter turnout on student disillusionment and the perceived apathy of the SA toward their constituents.

"It's not voter apathy, it's that the Senate has apathy towards the students to some regard,” Cavallaro said. “[The] students who have given up on the SA are arguably the students I've decided to vest interest [in through my campaign].”

After serving as the SA IVP under Engles, Wickerson said one problem they witnessed was difficulties in communication between the senators and the executive team.

Wickerson said they would want to change that culture next year if elected president.

“[I want to set] very clear, evidence standards for what it means to be a member of the SA, as well as what does it mean to be respectful and honorable to each other in our ideas,” Wickerson said. “Because at the end of the day, we were all elected and ran for something, and I think truly always reflecting on what that means to us and how we can improve on that is something I want to challenge every representative to do.”

Cavallaro ended by emphasizing the importance of bringing change to the Student Association Constitution.

“I feel like these changes should've been made a long time ago, and it's scary to me that I am the first person to run on a platform of constitutional reform,” Cavallaro said.

Wickerson said they would work with the students to best represent what they want, including those who have come out in support of Duong’s and Cavallaro’s platforms.