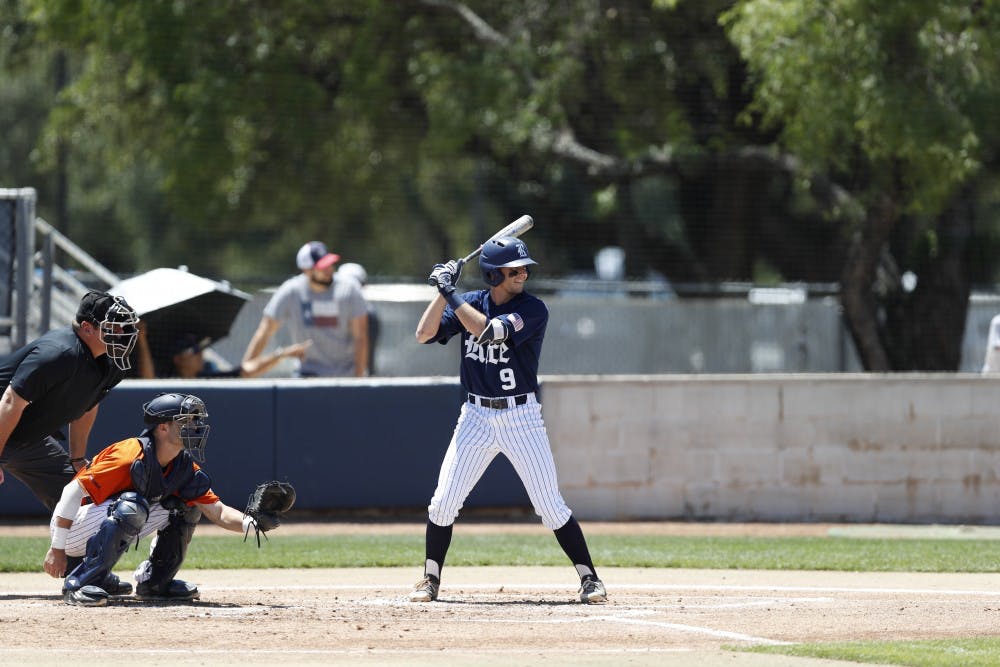 Head coach Matt Bragga was standing by home plate, his voice already hoarse from bellowing loud enough for the outfielders to hear him, jotting down notes and yelling out stats as each player stepped up to bat.

According to junior pitcher Matt Canterino, the change in style has players excited for the upcoming season.

“There’s a little bit of a different vibe around the clubhouse,” Canterino said. “A lot of people are looking forward to playing under Coach Bragga just because they want to achieve the things that we know we can achieve.”

Exactly what Rice can achieve is up for debate. The Owls missed the NCAA Tournament last season for the first time since 1994 after posting a record of 26-31-2 and finishing seventh in the conference. Dunlap said he thinks last year was a fluke given the legacy of the program.

“It’s sort of a hiccup in our history,” Dunlap said. “Whatever people say we’re gonna do this year doesn’t matter, as Coach Bragga has made a point to say. It’s not so much about getting back to where we were as it is looking at what we’re capable of and believing in that.”

“I don’t know any other way,” Bragga said of his vote. “There’s no shot I’m gonna be like oh, you know what, we’re a fifth place team. My mind does not process that. If we were flat bad, I wouldn’t vote us No. 1. We’re not. We’re anything but that.”

The Owls come into the season with a veteran pitching rotation. Canterino is the ace of the staff and was voted the C-USA Preseason Pitcher of the Year. Junior Addison Moss and seniors Jackson Parthasarathy and Evan Kravetz will also have major roles in the pitching rotation, according to Bragga.

According to Canterino, the upperclassmen in the Owls’ pitching staff notice the mounting pressure.

“Guys are starting to step up and realize this is getting to the end and we really haven't had the season we have wanted to since we have been here,” Canterino said. “It's getting to that point where we have to turn it on its head now — [each player knows] I have to step up and fill a role."

Among Parthasarathy and Kravetz, only one will start on the weekend and the other will likely come in for “competitive situations,” according to Bragga. Canterino said the experience of the pitching staff will be extremely valuable to the team.

“A lot of these juniors and seniors are stepping up and buying into what the team has to offer and really getting after what we need to do to be a good pitching staff,” Canterino said.

Meanwhile, senior Kendal Jefferies and junior Garrett Gayle, each of whom appeared in more than 20 games last season, will be two of Rice’s primary bullpen arms. Bragga said he has full confidence in the pitching staff’s ability to carry the team.

“There’s some depth, there’s some front line arms,” Bragga said. “A little bit of everything really. When you’re trying to fill out a pitching staff, that’s what you want. So I would definitely say strength is on the mound.”

Junior third baseman Braden Comeaux said facing Rice’s pitchers in intrasquad games has been valuable to the hitters as they prepare for the season.

“They do a really good job commanding the strike zone,” Comeaux said. “Most of our pitchers have command of at least three pitches. They can command them all over the zone, they can throw them wherever they want. A lot of them are throwing low-to-mid-90s.”

While Rice has a lot of pitching depth, the lineup is more of a question mark. The team is carrying more pitchers than position players, meaning there is little depth at many key spots according to junior second baseman Cade Edwards.

Bragga said he is still working through his lineup, with outfield spots still up for grabs even as the season begins. His infield, however, is mostly set with Comeaux at third, Edwards at second and sophomore Trei Cruz at shortstop. Cruz, who is making the transition from second baseman to shortstop, said the strength of Rice’s lineup is its versatility.

“We may not necessarily have the most power overall, but we don’t need power,” Cruz said. We’ve got a lot of guys who will hit for a higher average. Slugging percentages will be up. We’re athletic so we can do anything; we can bunt, we can steal, you name it.”

Comeaux said he has confidence in the hitters’ approach heading into the season.

Bragga’s Tennessee Tech team led the nation in home runs last season. Bragga said that while he can’t realistically expect this team to recreate that success, he wants Rice to be a difficult matchup for opponents.

“I want guys to look at us and go wow, that team is strong,” Bragga said. “That’s one thing I want to be known for. And then I want [it] to be known that there’s not an easy out in the lineup one through nine. I think this team can do that.”

Rice is hoping its veteran pitching staff and versatile lineup can carry it back to the NCAA Tournament. Edwards, however, isn’t afraid to set his sights even higher.

“Obviously you’re shooting for Omaha, that’s the bottom line,” Edwards said. “This program has been there seven times. So you’re not going to shoot for any lower than that. We 100 percent believe we can take home a conference championship and take it even further than that.”

The Owls will open the season Friday at home against the University of Rhode Island. Each of the team’s first 19 games are in Houston, with 15 of those 19 at Reckling Park.