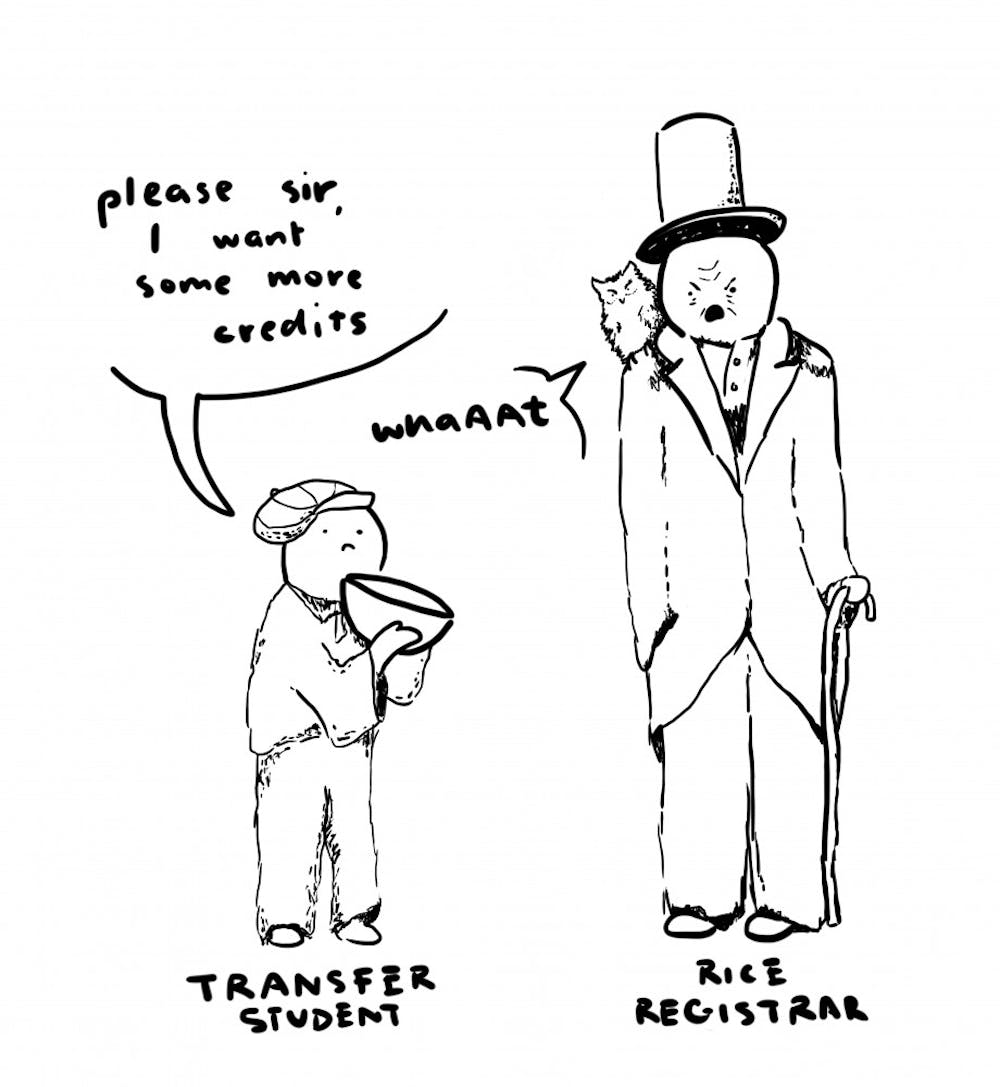 A group within the Student Association’s Academic Committee is gathering feedback from transfer students about their experiences in trying to earn Rice equivalent credit.

Bert Odinet, one of two students in charge of this initiative, said the project exists to address transfer students’ difficulty in receiving credit at Rice for the courses they already took at their previous institutions.

“The goal of this project is to improve the general experience of students transferring to Rice,” Odinet, a freshman at Hanszen College and New Student Representative, said.

According to Sam Shzu, a transfer student and a member of the SA’s Academic Committee,  when transfer students come to Rice, their credits are automatically registered under TRAN 100 or TRAN 300, which he said is not very helpful for most students because it only counts towards their total number of credit hours and does not satisfy any distribution or major requirements. According to the Office of the Registrar, Rice equivalent credit generally is only automatically given to select introductory courses.

There is no equivalency guide for prospective transfer students; according to the Office of the Registrar, the best way to determine transferability of credits is by reviewing the course catalogue.

Shzu said transfer students can apply to receive equivalent course credit for the classes they took at their previous school, but that process can be lengthy and difficult.

“There’s a lot of barriers in making those TRAN 100 generic courses count,” Shzu, the president of the Transfer Student Association (TSA), said.  “And when I say count, I mean making it labeled and listed in your transcript and your Degree Works as a department and a level.”

According to Odinet, Shzu started the project in the fall of 2018.

“It’s kind of been in the works since the beginning of the school year,” Shzu, a McMurtry College senior, said.  “But [the difficulty of transferring credits] has been an issue that’s impacting a lot of transfer students for a while.”

According to the website for the Office of the Registrar, the process of converting transfer credit to Rice equivalent credit includes submitting an “Undergraduate Request for Transfer Credit” form to the Registrar. In order for the form to be complete, the student must obtain a signature of approval from the appropriate department, which Shzu said can be difficult or impossible depending on the department.

“What this means is they will not consider any application to have these transfer credits become a course equivalent credit,” Shzu said.

According to Shzu, the SA’s project is intended to address the variations in accepted transfer credits between departments.

“This is a point I’ve been stressing to all the people who I’ve talked to about this, because it’s often misunderstood as us trying to ensure that all transfer credits from two-year community college or for-profit colleges become equivalent credits at Rice,” Shzu said. “That’s not what we’re asking for or really setting out to do; what we’re doing is talking to individual departments and schools.”

Shzu said that he wants the experiences of transfer students to be the project’s driving force, and that he and Odinet are collecting responses to a survey as both their primary source of data and as a starting point for the rest of the project.

“Once we know which departments and/or classes are providing the most trouble, we can lodge our complaints to the administration itself with some data to back it up,” Odinet said.

Odinet said their current strategies for getting more responses to the survey includes having the SA senators share it with their colleges. The project is a collaboration between the SA and the TSA, according to Shzu.

Shzu said that in addition to the current survey, he and Odinet may use other means of data collection in the future.  He said that one possible avenue is investigating data by the Office of Registrar on the amount of general transfer credits that are assigned Rice equivalent course.

Shzu said one of the a major goals of the project is making people more aware of the issues faced by transfer students, including future applicants to Rice.

“It’s not widely advertised, and maybe there are reasons for that, but we’re hoping to make this something that’s more visible so people can know about it before they try to come to Rice,” Shzu said.