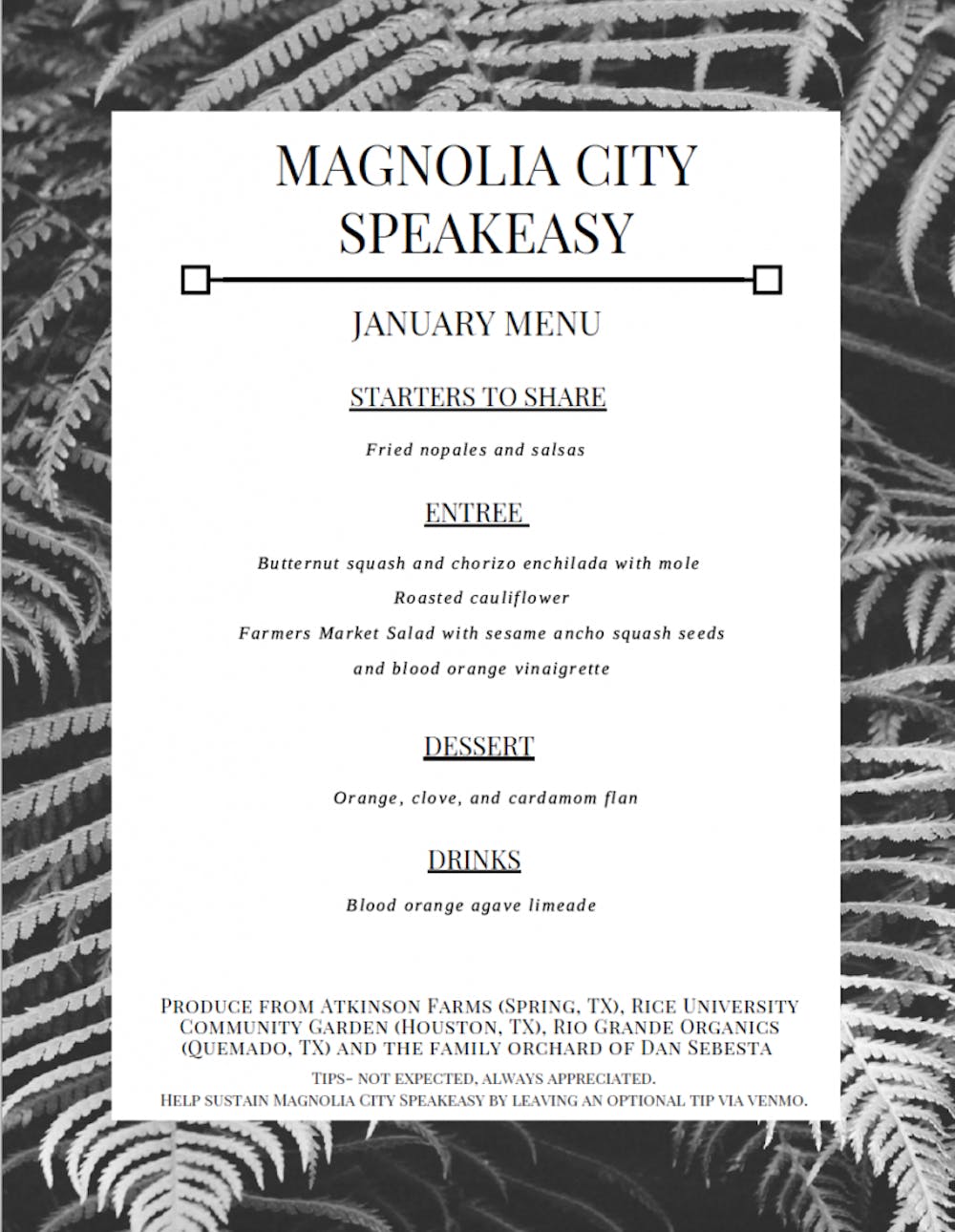 When Lan Margosis picks up the phone for our FaceTime interview, the sound of steaming floods the background. This can only mean one thing — Margosis is cooking. The steam, they tell me, comes from a vegan flan recipe they’re workshopping for their monthly pop-up dinner, the Magnolia City Speakeasy, where they invite guests into their home and cook a three-course, plant-based meal for them.

Margosis, a Duncan College senior, started the Magnolia City Speakeasy in Sept. 2018. They use the phrase “Magnolia City,” one of Houston’s former nicknames, because it reflects the plants native to the area. They call it a “speakeasy” because it brings to mind an underground gathering of a close community. True to the name, guests pay a “suggested donation” to buy a ticket, rather than paying for the meal like they would in a restaurant.

“It does kind of make you feel like you’re doing something cool — underground, or something,” Katie Webber, a three-time attendee, said.

A dinner filled with vegan food might not sound appealing to everyone, but this is one of the reasons why Margosis chooses to cook only plant-based meals — to show people that “delicious” and “vegan” aren’t mutually exclusive. Margosis said they also want to support local farms, especially those who use sustainable agriculture practices. Additionally, they’ve noticed many of their vegan friends struggle to find vegan restaurants despite Houston’s abundance of fine cuisine, so their speakeasy provides the gourmet vegan food they desire.

These vegan friends were the first guests to the Magnolia City Speakeasy, which is invite-only. Margosis originally invited their friends and some classmates to attend the event, but soon these friends began inviting their friends until the event became so popular that tickets once sold out in two hours.

“We’ve got regulars now, which is incredible,” Margosis said.

Each month’s meal has a theme — Margosis has made Japanese, Southern and Tex-Mex cuisine, to name a few — and they choose dishes that they think would be both fun and feasible. But, like an essay, that is only the first draft of the menu. Once they have an idea of the dishes they want to cook, they’ll go to the Rice Farmers Market, where they choose the produce that would fit well in their menu. Based on the produce that the market has available, they revise it. Then they start preparing the food two days in advance, trying out recipes and making what they can ahead of time before they and their roommate make the rest on the day of the event.

However, the event has limited space, with a maximum of twelve to thirteen guests. This isn’t because Margosis wants to make the event exclusive — in fact, they said they’d love to expand the event. But right now, expansion isn’t possible for a innocuous reason: space. In their apartment, there’s only one stove and and oven, limiting the amount of dishes they can make. Additionally, they said that they and their roommate Sarah Bradford only have about 13 sets of plates, cups and forks, meaning they have to wash the dishes in between every course.

“All of our plates and cutlery and cups are all mismatched, which I think is part of the charm,” Margosis said.

Margosis said they started the event as a response to their experiences working in professional kitchens and, more recently, spending the summer cooking for 20 workers on Hana Farms in Hawaii. After spending months using odds and ends from the farm’s pantry to make creative dishes like eggplant breaded with crushed tortilla chips, they wanted to continue the experience in their Houston apartment.

Because of these experiences, Margosis says they would be interested in making cooking a part of their career. They haven’t focused on cooking in their academics — in their kinesiology and public policy majors, they focus on sexual and reproductive health — but they said they would love to work for a non-profit such as Urban Harvest or Brighter Bites, which tackle urban farming and food security, respectively.

Margosis said that the most important qualities a menu can have are balance and variety. Logistically, it’s important to have some dishes that they can prepare ahead of time so that they aren’t rushing to make everything on the day of the event. But creatively, Margosis likes their menu as well as the individual dishes to have a mixture of textures, flavors and temperatures.

Margosis said that the process of creating and revising a menu is their favorite part of hosting the Magnolia City Speakeasy.

“I love going from a blank page to a fully realized meal and having people come into my home and enjoy this meal that I cooked for them,” Margosis said.

But they also enjoy the connections that they makes through the event.

“I also love how intimate these events are because they are in my home,” Margosis said. “It’s a great way to meet new people and to have deeper connections with the people who I already know, and it’s a great way for other people to meet people who they may never have met before.”

Webber agreed that one of the best parts of the speakeasy is meeting new people and spending time with her friends in a new environment.