‘Step and Screw!’ brings fresh comics to the Menil 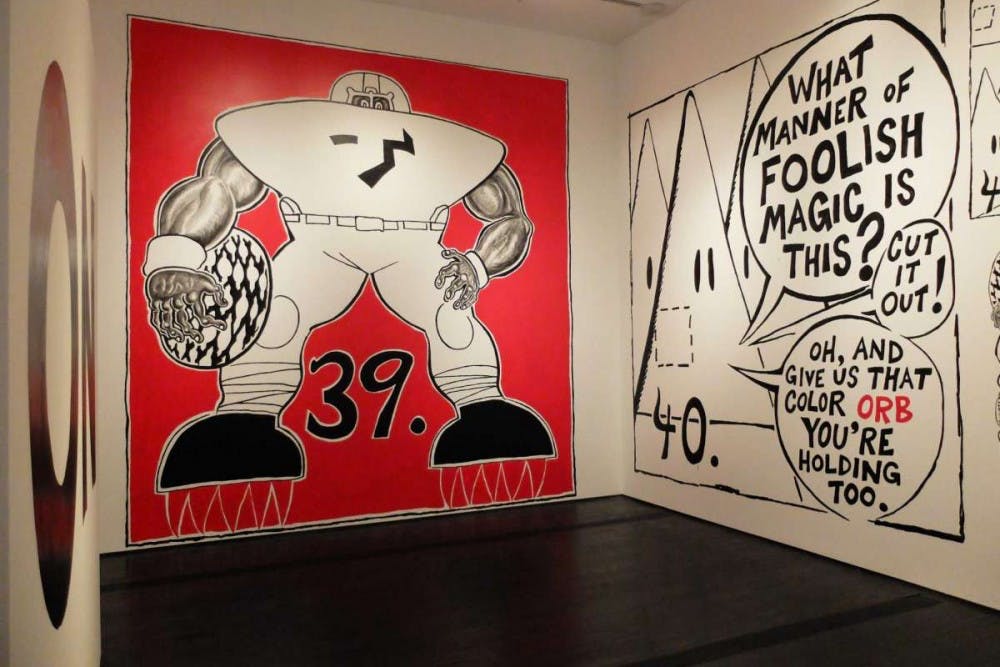 The last six panels of the comic are painted large on the walls of the side-gallery. In the center of the room is a small chamber, the entrance (or, as Hancock has playfully scrawled, “In Trent’s”) of which faces away from the gallery’s door; a sort of inner sanctum, it contains the comic’s other thirty-nine panels. Trenton Doyle Hancock’s new “Contemporary Focus” exhibit at the Menil, “Epidemic! Presents: Step and Screw!” consists entirely of a single 45-panel comic; all at once an exhibition, a story and a single piece.

The story would be too good to spoil, if spoiling wasn’t inevitable; the ending is visible from the beginning of the comic. The comic revolves around black freelance superhero Torpedo Boy, who receives a mysterious call from a faint-voiced (“It sounds like you’re breathing through a sheet!”) potential client. Arriving at the scene, he finds only a darkened house. His client asks him only to climb a footstool and plug in a lightbulb — to “step and screw.” Torpedo Boy is outraged at the smallness of this request- — “I’ll have you know I’m still charging full price!” — but complies; when the lights turn on, he finds that he has in fact been surrounded by KKK members and the lightbulb was a pretext to get him up on the lynching stool. The end of the comic, plastered in full color around the room, shows Torpedo Boy using the power of a spoonful of ground beef to transform into a football player with inhuman strength; subsequently, he beats up the KKK members and escapes.

Hancock makes a lot of uncomfortable jokes; he is ambiguous but not subtle, letting the viewer wonder what his point is but never letting the viewer doubt that he has one. He questions the relationship between the NFL and black visibility by having a superpowered football player beat up the KKK. He points out the peculiar and repulsive presence of deeply-held notions of Southern honor by having a Klansman allow Torpedo Boy a last meal of ground beef. Labeling the location of the attempted lynching only as “Somewhere in Texas,” Hancock finds the whole state guilty and culpable. As revealed in the exhibition’s accompanying pamphlet, even the name, “Step and Screw,” is an allusion to black actor Stepin Fetchit, who found fame through playing lazy, dumb, highly stereotypical characters. Hancock asks what a person owes his community, and attacks Fetchit for falling short of it; with his allegory of Torpedo Boy, he warns of the dangers of being handsomely paid to “step and screw.”

As a reminder, this is a small, one-piece exhibit, ensconced in a single gallery of a side-wing of the Menil. It’s very good, but it’s a three-minute experience from start to finish, a bit too small to serve as the focus of a museum-district trip. However, my fascination with “Step and Screw” led me to look up Hancock’s prior portfolio. Many of his works occur in the Moundverse, an imaginary realm populated by plant-animal hybrids, bizarre, allegorical enemies and, of course, Torpedo Boy. In one of his prior pieces of comic art, alien enemies conspire against an ancient, bloblike Mound; in another, Torpedo Boy steals tofu from a group of militant vegans. Whether you’re able to get down to the Menil or not, trust me — Hancock is a rabbit hole you want to fall down.

Hancock’s “Epidemic! Presents: Step and Screw!” is showing at the Menil Collection from Jan. 26 to May 19. Hancock will speak about his work at the Menil on Feb. 6 from 7 - 8 p.m.