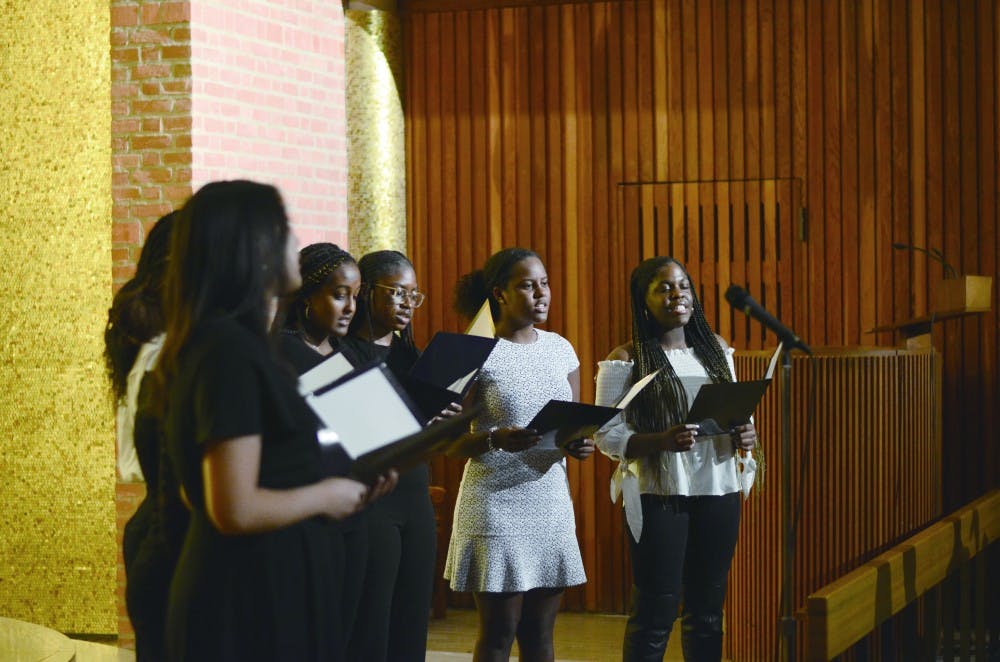 At 8 a.m. on Monday, members of the Rice community gathered at the Allen Center for breakfast before going to the 41st Annual “Original” MLK, Jr. Day Parade downtown.

Instead of the float used in the parade last year, Rice presented “a very energetic walking group,” as described by the Facebook event page.

According to William Edmond, assistant director of multicultural affairs, students decided walking as a group would be a better option than a float.

“Logistically, we advertised the opportunity for students to participate,” Edmond said. “By determining to walk, we were able to solicit the participation of students, alumni, faculty and staff close to 100 volunteers, including the Marching Owl Band.”

Greg Marshall, director of university relations, said that both the Houston Pride Parade group this past summer and MLK group this weekend opted for walking groups instead of redecorating the float used in last year’s parade, primarily for financial reasons.

“We explored the possibility of trying to rent a larger float this year, but the cost to do so is thousands of dollars — many times what we spend each year on redecorating the float, printing T-shirts, providing food, transportation and security to parade participants,” Marshall said. “So that simply wasn’t feasible.”

Yonas Tekola, vice president of the Black Male Leadership Initiative, said that a walking group made more sense to promote turnout to the parade.

“I think a big critique from last year was the float itself and the processes that led up to the float,” Tekola, a Jones College junior, said. “But the parade itself was a good time. I was on the float, and I was there with other students, faculty, alumni. I think the more students that get involved, the better we feel in the group, as well as the better we present ourselves as a university.”

Brown College sophomore Mathias Adamu walked in the parade this year, along with a group of other Rice community members and the MOB.

“The parade was wonderful,” Adamu said. “Getting up early was kind of a struggle but actually walking was really fun. Cheering and waving and handing out bookmarks to all the people was awesome.”

In his introduction, Leebron referenced the desegregation Rice University was going through at the time of Dr. King’s assassination.

“When Martin Luther King was shot, Rice was still a year away from graduating its first black graduate student, Raymond Johnson, and two years away from graduating its first two black undergraduates, Ted Henderson and Linda Faye Williams,” Leebron said. “We are a very different institution today. And we see everyday the benefits of that, and the challenges of that. For me personally, what Martin Luther King symbolized was the symbiosis of anger and optimism, a belief that this nation could be challenged to live its ideals and ultimately the mountain could be climbed together.”

Turner said that he was personally inspired by King’s work.

In her speech at the vigil, Black Student Association President Summar McGee said that King left behind a legacy of improving the lives of others.

“If we can take anything from Dr. King and his legacy, [it] is that each and every one of us has a collective responsibility to the person who sits beside us, that we have a responsibility to do what we can to make that person’s life better,” McGee, a Hanszen College junior, said.

Jones College freshman Drew Carter said he was grateful for King in his remarks following McGee’s.

In the closing remarks of the vigil, Jeremiah Murrell, president of the Black Male Leadership Initiative, said that he wanted to challenge students to take action.

“It’s very easy to see something that’s wrong and wait for someone else to make it right,” Murrell, a Hanszen College junior, said. “But it’s gotta be one of us ... it’s gotta be somebody. That’s my challenge to you. When you go about the semester, think about this weekend, and think about Dr. King, and everyone who made it possible for us to be at this university. And just take action.”

Tekola said that he wanted to give a shoutout to the black student community for motivating changes in this year’s celebration of Martin Luther King Jr.

“Even though this is a good first step, we want to take this energy and put it towards our next initiative,” Tekola said.