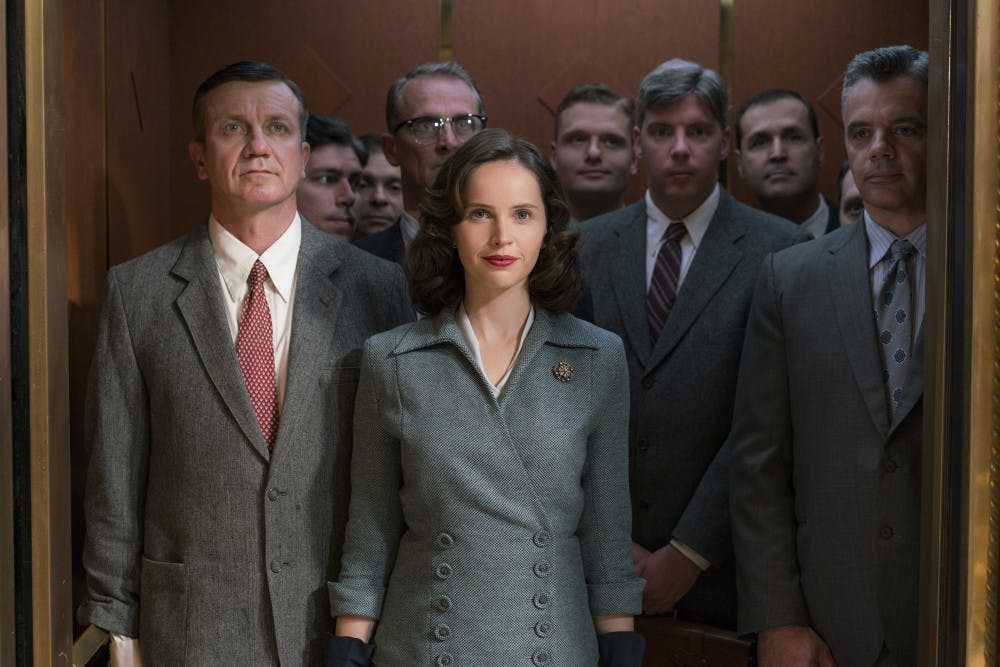 In “On the Basis of Sex,” Ruth Bader Ginsburg (played by Felicity Jones) is exactly the kind of heroine an audience looks for. She’s an underdog, facing discrimination despite graduating first in her class as one of the only women at Harvard Law School. But she’s not passive — her determination to prove her doubters wrong and her ability to dish out sass along the way make her instantly likeable.

Her position as an underdog also makes her a uniquely sympathetic character. It’s hard not to root for her because of the sheer amount of obstacles she faces simply for being a woman. The movie makes the audience genuinely care about what happens to her, letting viewers rejoice in her successes and share in her disappointment. In the film, most of her naysayers are male, but for every male character who tells her she can’t succeed, there’s another male character supporting her endeavors. Her husband, Martin “Marty” Ginsburg, never fails to believe in her, and Mel Wulf, the head of the ACLU, consistently challenges her to improve. This is a movie about female empowerment, but it doesn’t put down all men in the process.

In the film, Ruth’s personality has the potential to derail the message of female empowerment. Her personality closely resembles the “unsympathetic and coldhearted” stereotype that many successful women face. However, Felicity Jones’ nuanced performance helps the audience see past this, showing that even though Ruth’s approach toward the sex discrimination in the law is objective and critical, she has an emotional motivation.

If you’re looking for an action-packed movie, then this movie might not be for you. When watching the trailer, I wondered why it seemed to show every important moment from the movie. But once I saw the movie, I realized why — the film, although powerful, is somewhat slow. At times, it’s more focused on vignettes of Ruth’s life than telling a continuous story. The film is also confusing about the events it covers, making it seem like it covers Ruth Ginsburg’s entire journey to defeating sex discrimination in law. In reality, we only see her first case, Moritz v. Commissioner of Internal Revenue.

However, what the film lacks in structure, it makes up for in heart. All of the characters are compelling, and their relationships even more so. We might scroll through Instagram and think “relationship goals” when we see cute couples on the beach, but Ruth and Marty are true relationship goals. Rather than being intimidated by Ruth’s intelligence, Marty, played by Armie Hammer, nurtures it and encourages her to take on challenges. When she’d given up on becoming more than just a law professor, he encourages her to tackle sex discrimination by bringing Ruth her first-ever court case, and he believes in her abilities when no one else does. She succeeds because of her own intelligence, but Marty gives her the support she needs to push through the challenges.

The movie also succeeds in the difficult task of showing a supportive but complex family. Jane, played by Cailee Spaeny, is Ruth’s rebellious daughter who seems to direct all of her teenage anger at her mother. Ruth and Jane find themselves at odds very often because Jane looks for affirmation of her smarts from her mother, but Ruth prefers to criticize and debate as a way of showing that she cares. The blend of love and frustration that they feel toward each other is authentic and surprisingly relatable for such a successful family.

In fact, the phrase “authentic and surprisingly relatable” describes the movie as a whole. Its heartfelt moments make a movie about a woman’s path to defeating sex discrimination in the law surprisingly easy to relate to, and it has the audience rooting for Ruth the whole way. Despite a few flaws in plot, “On the Basis of Sex” is a must-watch for anyone looking to see a moving film.