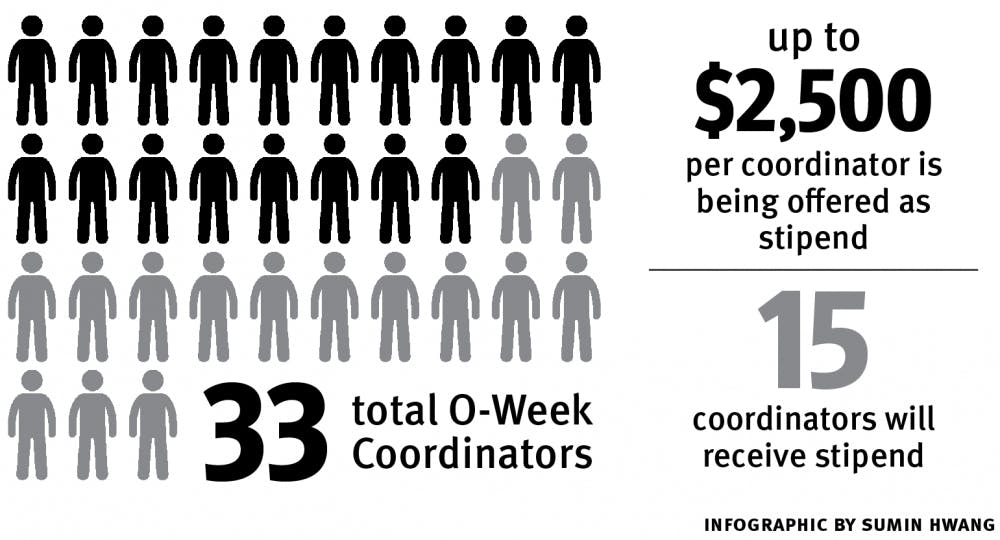 Additionally, all coordinators will now earn letter grade as opposed to a satisfactory or unsatisfactory grade for the spring semester course that coordinators are required to take, according to Lovett College President Akin Bruce.

Bruce said a third change he and Will Rice College President Tanvi Varadhachary pushed for was increasing the number of credit hours for the spring course from one credit hour to variable credit of either one or two hours. However, he said when Dean of Undergraduates Bridget Gorman and Director of First Year Programs Araceli Lopez brought their suggestions to Faculty Senate, the senate reached the verdict that the academic content of the coordinator course did not justify an increase.

“To be quite honest, I didn’t think the administration and FYP would be willing to roll out a stipend for the coords so quickly, so I’m really impressed with the outcome,” Bruce, a former O-Week coordinator, said.

O-Week coordinator applications increased by 12 percent from last year, according to Lopez, who said she believes the change is due to the stipend.

Gorman said the Martel College magisters initially proposed the change to her early in the fall semester. Her office then worked with FYP to implement the program. Applicants indicated whether they wanted to be considered for aid when applying for the program, according to Gorman. Then, her office and Lopez considered both the applications and financial aid status to make funding decisions and notify coordinators at the time of their selection.

O-Week Student Director Gabrielle Falcon said while the stipend is a “massive improvement,” she would eventually like to see a flat rate for every coordinator. Last year, O-Week coordinators received no summer compensation other than eight meals per week and on-campus housing from June 1 until advisor training and O-Week, Falcon said.

Falcon, who coordinated Martel’s O-Week in 2018, said she worked three jobs to support herself that summer; one in the Provost’s Office, a second at Coffeehouse and a third in the political science department conducting research.

“It [was] stressful,” Falcon, a junior, said. “Oftentimes coords were always trying to figure out where they were going to get their next meal and planning trips to the grocery store together. My magisters also fed us once a week to help us offset the costs.”