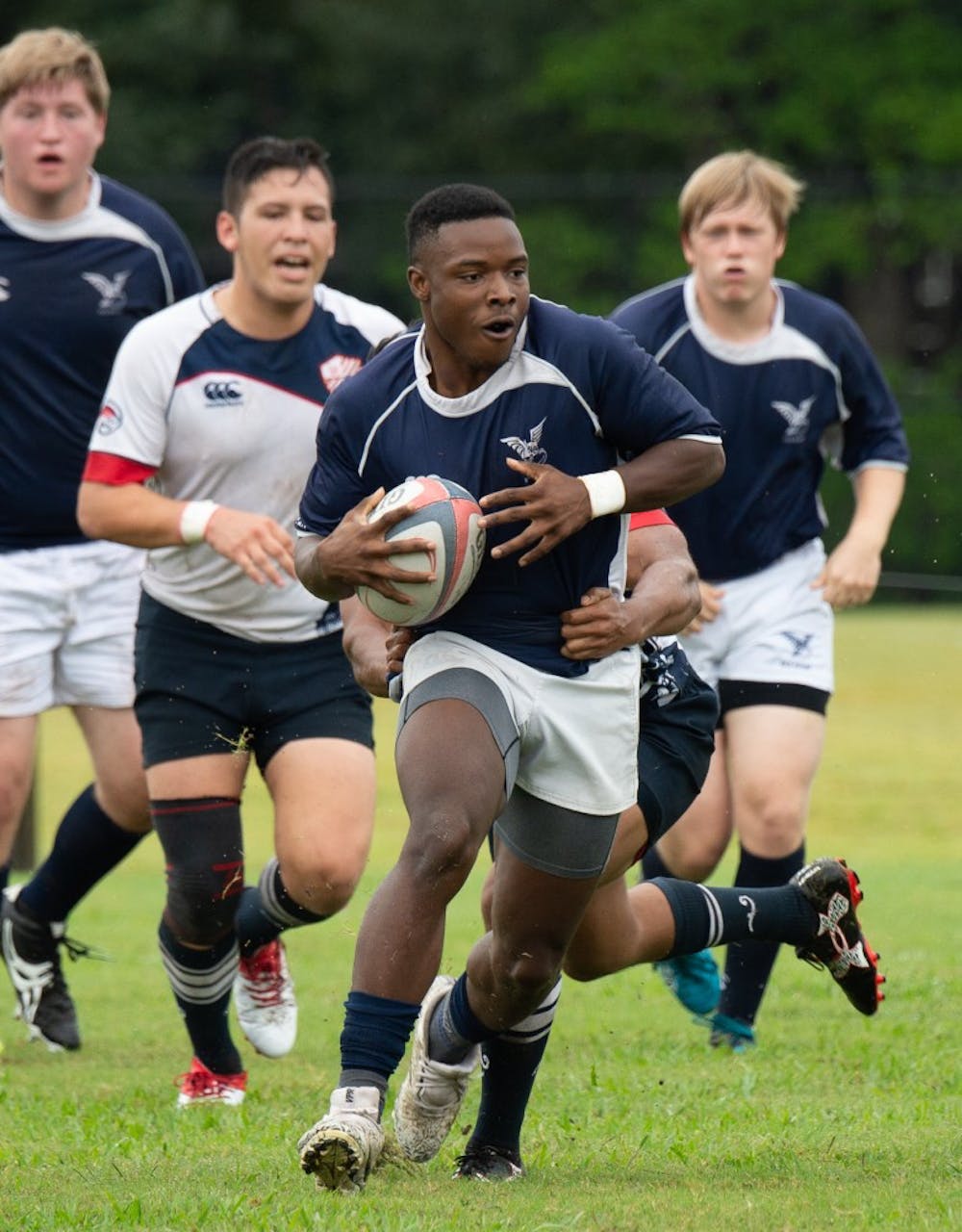 Just two years after Rice started charging tuition and five years after Doc C first graced the university’s hallowed halls, Stewart Morris Jr. (‘71) arrived on campus as a transfer from the University of Virginia. The year was 1968, and Morris soon discovered that there was no rugby club yet extant at his new school.

Now, 50 years later, the Rice University Rugby Club is celebrating its half-centennial on campus. In the interim period, the team has piled up accolades, winning nine Texas Championships since 1989 and finishing No. 9 in the country in 2000, according to the club’s website.

Faculty associate Jabus Roberts has been with the team for 36 years. He’s a nuclear physicist by trade but a rugby scholar at heart. Though he hasn’t played the game himself in a while, his passion for the game still shines through in his wealth of knowledge for the game’s history. According to him, rugby as we know it today can be traced back almost 200 years to a few overzealous high-schoolers.

“In 1823, the only kids at Eton [a prestigious English boarding school] in rugby who could play were soccer types who were very fast,” Roberts said. “So this one boy got upset, grabbed the ball, ran it, knocked a guy and touched it down in the goal. And he was expelled from school. But [the students] figured out [they] could devise a game that’s for everybody, and not just fast, agile kids. So they came up with rugby.”

Historically, rugby hasn’t been quite as popular in North America as in countries such as England and Australia. And according to Roberts, most of the historically good North American teams come from California and British Columbia, not Texas. However, according to head coach Mario Botha, the landscape is changing quickly.

“I grew up in South Africa, and rugby’s a way of life over there,” Botha said. “But the thing about rugby in Texas is that it’s growing so much. Before, it wasn’t every school that was playing rugby. Now, every school has a rugby program. It’s being played at high schools now, so schools like [Texas A&M University] and [the University of Texas, Austin are getting 20 [or] 30 players every year that have been playing rugby for three [or] four years in high school.”

In contrast to the larger Texas schools, team captain and McMurtry senior Lane Toungate said that most people on Rice’s team have little to no rugby experience when they show up as freshmen.

“We have three guys on the team currently that had experience before coming to college,” Toungate said. “I came in knowing nothing about rugby. I got recruited out of O-Week by the former captain; I had a love of contact sports and rugby was the thing to do.”

To bring the new players up to speed, Botha said he, as well as the assistant coaches and veteran players, have to start by teaching the basics.

“[We start] literally from: this is a ball, this is how you catch, this is how you pass,” Botha said. “We like to start pretty slowly, because rugby’s a tough sport and we want to make sure everyone’s safe, so we spend a lot of time going over the safest way to do things on the rugby field.”

After establishing the fundamentals, Botha said he likes to focus on skillwork. According to him, the focus stems partially from his coaching philosophy and partly out of necessity.

“We always play against teams where we’re outmuscled, size-wise,” Botha said. “We can’t be bigger and stronger than them, [so] we want to be more skillful than them.”

Most of that training takes place in practice, where the coaches can instruct players, stop the game and make executive decisions. But according to Botha, one of rugby’s most unique aspects is how much in-game decision-making is made by the players on the field.

“Rugby, unlike football, is continuous,” Botha said. “So there’s time to think on the field, and the players have to make the decisions. It’s very important that you teach them and train them to become decision-makers on the field, not just the rules.”

Most of the team’s matches take place in Texas against teams like the University of Houston, against whom Rice has an annual rivalry game. But according to former head coach Ed Brown, who coached the team from 1996 to 2007, the team sends two players to New Zealand every year, and the whole team visits Ireland every four years. Toungate, who was one of the two players who visited New Zealand last year, said he found the experience both eye-opening and helpful.

“[I was] able to learn that rugby has an enormous international community [and] that it’s practically a religion in some parts of the world,” Toungate said. “Being able to bring those experiences back and teach the team skills that I’ve learned is really cool.”

As its 50th anniversary rolls around, the team has a large and highly involved alumni base who keep in touch and return to Rice for the annual alumni game. According to Brown, the bonds formed between teammates during their time playing together are the centerpiece of the Rice rugby experience.

“Seeing [the players] come back to the alumni game is a lot of fun,” Brown said. “[Rice Rugby] is lifetime, and a lot of these guys stay friends for years. They’ll tell you that the best thing of their experiences at Rice was the rugby team. To be part of that is a big deal for me.”