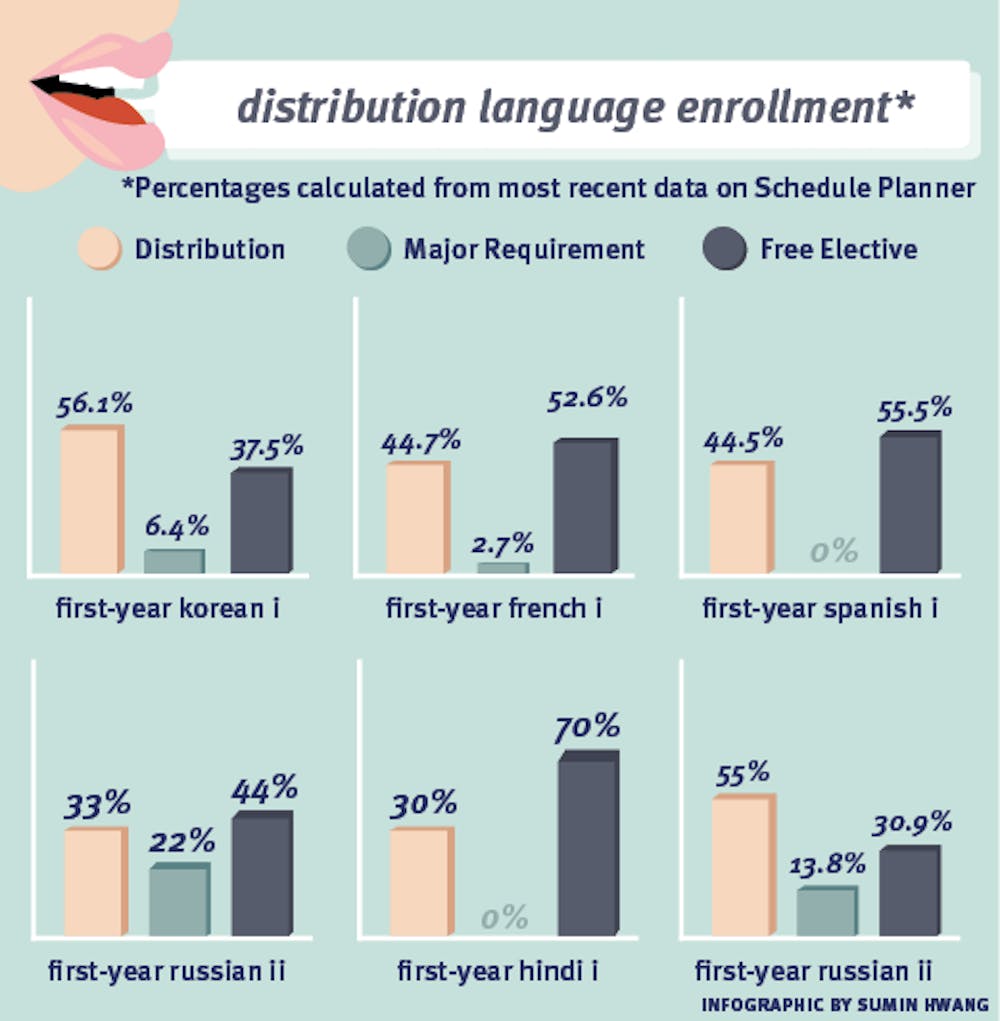 Students who take introductory-level language courses will no longer receive Distribution I credit for these classes beginning in May 2019.

This change comes after the accrediting body for schools in Texas recommended that the School of Humanities remove DI credit for first-year courses, according to Lecturer Hélade Santos, the director of language instruction at Rice’s Center for Languages and Intercultural Communication (CLIC).

Documents from the accrediting body, the Southern Association of Colleges and Schools, state that the recommendation is based on the reasoning that introductory foreign language courses are skill courses rather than pure humanities courses, so they do not fall into the category of a DI course.

Lecturer Luziris Pineda Turi, the associate director of the CLIC, said that she is not worried about a drastic loss in enrollment because the introductory-level language classes have survived a lack of DI credit in the past. According to Turi, these classes did not start carrying DI credit until 2015.

“I’ve been here since 2010, so I was here pre-DI, I was here when we got DI and I’m here when we’re getting DI taken away,” Pineda Turi said. “All the languages that exist now have existed since then, so they survived not having DI, getting DI and I’m positive that they will survive [now]. I think that [for] Rice students, their motivation can partially be DI, but I think for the most part it’s a personal interest in being a global citizen.”

Santos said the CLIC has been devising ways to overcome the fact that students might be discouraged to take first-year courses without the incentive of DI credit.

“We’ve been trying to brainstorm different ideas to approach the students,” Santos said.  “First of all, [we will] provide the information that if they continue studying the language, they can have DI in the second-year courses, and also trying to convince them of the importance of studying a foreign language for their professional and their personal life, beyond just having the DI credit.”

Santos said one of the proposed solutions is beginning a promotional academic series where students would share their experiences from studying a foreign language.

Pineda Turi said that the number of students affected might not be significant, with many students entering with some previous knowledge of a language, thus bypassing the introductory course and going direclty into the upper level courses that still carry DI credit.

“I wouldn’t underestimate the number of freshmen that actually place higher, particularly in Spanish and some of the more commonly taught languages,” Pineda Turi said. “There’s also heritage speakers of Chinese and Hindi and they often don’t even start at the first level because they have some background knowledge of the language.”

However,  Lecturer Jessica Morones, a Spanish lecturer who taught the introductory-level courses in the fall semester, said that removing DI credit will impact enrollment in language departments classes because these courses will lose the students whose only motivation to enroll was fulfilling their distribution requirement.

“Having DI is positive because maybe those students who were not motivated intrinsically, maybe they were motivated because it was a requirement, they will learn about the language and they start loving the language,” Morones said.

Santos, who teaches Portuguese, said that it is possible that the change will have more of an impact on the smaller languages.

“We don’t have that benefit of some of the students coming with some level of some knowledge,” Santos said.

Brianna Lee, a Hanszen freshman, said she was planning to take an introductory French class to fulfill her DI credit next semester. With this recent change, however, she said that she is less likely to include a language in her schedule, even though she has an interest in the subject material of the class.

“Especially for STEM people like me, I don’t like writing papers and stuff, and that’s more the reason why I wanted to take a language course for my DI credit,” Lee said. “But if I can’t do that now, I actually have to take humanities courses, so that means I don’t have any time to take French.”

Marcus Thompson, a sports management major, said that prior to finding out about this change, he was planning on taking an introductory Spanish class next semester to fulfill one of his DI requirements.

“I don’t want to take Spanish anymore,” Thompson, a freshman at Hanszen College, said. “I was going to take it because I took Spanish in high school, so I figured if I took the intro [class],[it would] be an easy way to get DI credit.”

Santos and Pineda Turi both said that they feel that ultimately, most of their students want to be in their classes.