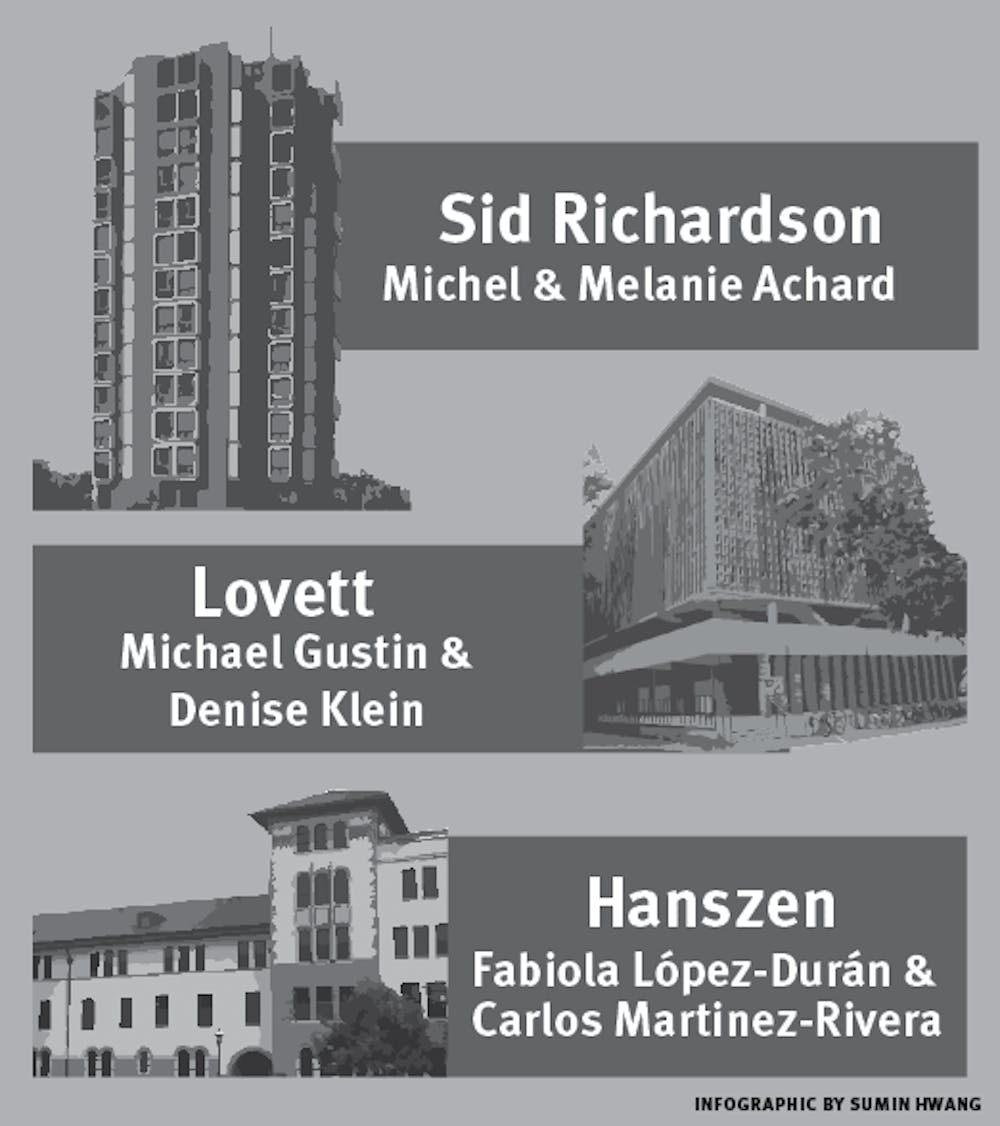 Search committees at Hanszen, Lovett and Sid Richardson Colleges have announced their new magisters, who will begin their terms at the end of this academic year.

Fabiola López-Durán and her husband Carlos Martinez-Rivera will be the new magisters at Hanszen, Michel and Melanie Achard will be taking over at Sid and Michael Gustin and his wife, Denise Klein, will begin the role at Lovett.

Although all three colleges were searching for new magisters and were looking at the same candidates, Chase Hinman, head of the search committee at Sid, said that it was not a competition.

“We had communication with [the other college committees] and we were all working together to find the magister[s] that fit our colleges the best,” Hinman said.

According Madison Grimes, head of the search committee at Hanszen, many candidates had already been planning to apply and reached out by email or attended a reception at the beginning of last semester. Grimes said it didn’t feel like competing because the three colleges were each looking for something different.

“We had 11 magister candidates total, which was more than enough for all three of the colleges,” Grimes, a junior, said. “Also, Sid, Lovett and Hanszen are all very different in our cultures and needs as colleges, so I was confident that we would each be able to find our best match from this pool.”

Hinman said that above all, Sid students wanted a magister who is very approachable.
“The geography of Sid forces the magister to interact with the students a lot, so we wanted someone who was very easy to talk to, someone who wouldn’t mind students bombarding them with questions early in the morning or late at night whenever they see them,” Hinman said.
Carolina Hatanpää, one of the search committee chairs at Lovett, said that at Lovett, students wanted someone who appreciated their prominent commons culture and respected the autonomy and diversity of their students.

“Whether we had someone totally new or someone who was familiar with the residential college system, we wanted magisters who realized there isn’t any one size fits all solution,” Hatanpää said. “An appreciation for diversity was also very important to us — we wanted someone who was aware of the different needs of off campus students, international students, student athletes and other affinity groups.”

Grimes said that in order to gauge what qualities Hanszen students were looking for, the committee sent out a survey to the remainder of the college at the beginning of the search process.

“Ultimately, those qualities ended up being approachability and accessibility; understanding and respect of student leadership and independence and creativity in engaging with [Hanszen] students,” Grimes said.

In each college, the candidates were chosen by a Magister Search Committee, which are student-led and composed of students from each class.  According to Hatanpää, there were also two residential associates and a magister from another college on the committee.

Hatanpää said that the students on the committee were responsible for deciding on a magister, while the adults served as more of an advisory role.

“The decision was made entirely by the voting members, who submit two names to the dean [of undergraduates],” Hatanpää said. “But we definitely appreciated and listened to the input from our A-Team.”

Throughout the search process, the committees invited candidates to participate in a variety of activities in order to become more familiar with the college’s culture and students.

According to López-Durán, she and her husband had a very busy fall, attending as many events as possible at all three colleges. Achard said he and his wife were able to see the college life firsthand through these events.

“We had long dinner conversations with some students, and we attended a delicious ice cream making competition where we got to see the floor wars in action,” Achard said. “We saw a lot of Sid college spirit, and it really made us want to be part of the college.”

Gustin and Klein, the new magisters at Lovett, were previously the magisters at Wiess College. Gustin said that even though all three colleges had wonderful cultures and people, being chosen for Lovett was special to him and his wife.

“Denise and I, we had been long time associates at Lovett before we became Wiess magisters,” Gustin said. “We knew a lot of people there from way back when, so it felt like coming home a bit, because we really like the commons culture of Lovett.  [There are] a lot of things we like about it, so we’re very happy that we’re there.”

Grimes announced the new magisters at Hanszen-only dinner this past Monday.

“Being a magister is a fulfillment of my life and journey, from being a very curious younger student whose mind was totally open to everything I was able to see and to earning the privilege [of being] a teacher and a mentor, to get the chance of opening the minds of my students,” López-Durán said.  “It’s also my duty to work for the institution, to build the institution, and I think that being a magister gives you the platform for doing that.”