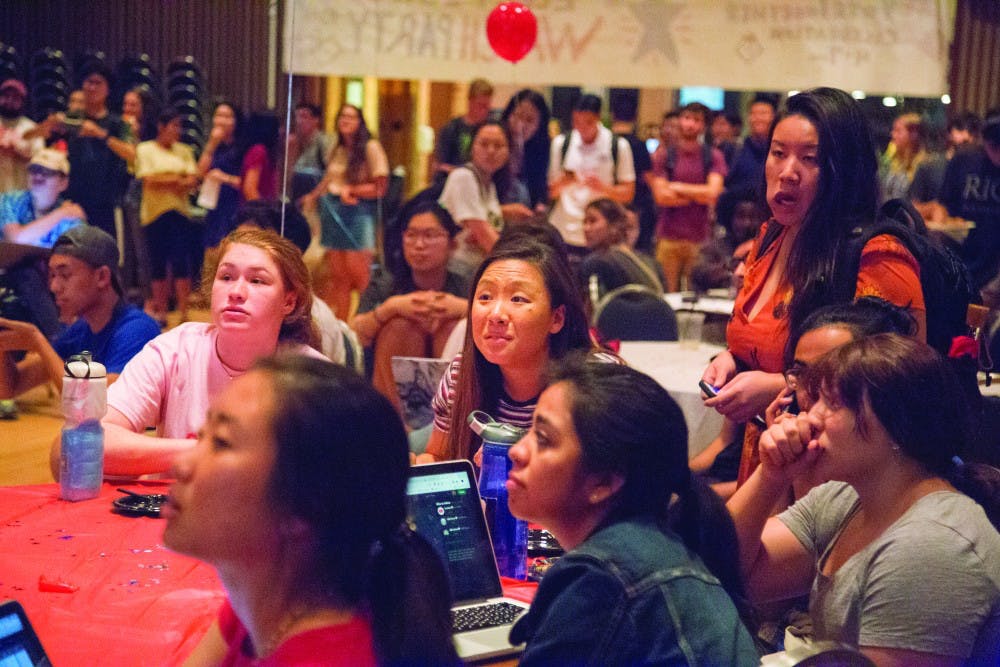 As election results rolled in around 10 p.m., many students watching in the Rice Memorial Center Grand Hall expressed disappointment with the defeat of midterm election candidates Beto O’Rourke, who lost by 2.6 percent to Republican incumbent Ted Cruz, and Todd Litton, who lost by 7.6 percent to Dan Crenshaw, in races for the United States Senate and House of Representatives, respectively. But some students also said they are choosing to focus on the increased voter engagement during the 2018 midterm elections.

The Grand Hall  was packed with students buzzing about the midterm election races during the evening as poll numbers started coming in. Red and blue ribbons and balloons hung along the walls, creating a festive, patriotic atmosphere.

Minutes after the Texas Senate race was called, Baker College senior Nati Salazar said she was struggling to come to terms with the results.

“It’s sad,” Salazar said. “I’m not really processing yet, since it happened so quickly. It was a quick flash on the screen. I think I kind of prepared myself without trying to lose hope, but it wasn’t a super shock. After the [2016] election, we’re kind of numb and expected the worst.”

“Out of all the Republicans, why Ted Cruz?” she said. “He is a far-right Tea Party loyalist, supports government shutdown. Sorry, I just needed to get that off my chest.”

Meanwhile, McMurtry College freshman Dylan Nguyen said he was trying to focus on the way voter turnout increased during this midterm season.

“It was a little sad,” Nguyen said. “There was a lot of progress considering how Texas used to vote. It’s cool so many people voted, really. There’s a lot of good to take out of this. It reflects how the whole country as a whole is gradually changing.”

Before the final election results came out, many students said they were afraid to be overly optimistic about the election outcomes.

“It’s going to be closer than expected,” Amir Kazempour, a Ph.D. student in economics, said. “Cruz will probably win by 2 to 3 percent. I don’t want to expect anything, but I want Beto to win. It will be a pleasant surprise.”

Conservatives like Immanuel Joy, a Lovett College senior, said he didn’t want to assume that Cruz would win the Senate race, although he was hopeful that Cruz would.

“I’ll be taken aback [if Beto O’Rourke wins] but I won’t be surprised,” Joy said. “I could see it because of the high voter turnout. People are involved and there is no such thing as a state that always votes red or blue. I really wish the Russians were intervening in this election and it results in a Cruz victory.”

Similarly, Thomas Keller, a Duncan College sophomore and secretary of the Rice University College Republicans, said he wanted to wait for the results to come in.

“It’s a little hard to call,” Keller said earlier in the night. “I have no idea. I’m an electrical engineering major. I’m not going to to say anything until I see the final results.”

As election results rolled in around 9 p.m., students and faculty said  regardless of the outcome, they were thankful for the way this election increased voter engagement.

International graduate student Sebastian Lopez, who is studying architecture, said  increased voter turnout is a step forward. Although he couldn’t vote in the election, he said he came to the watch party to show his support.

“I think regardless of results, it’s nice to see young people involved in politics,” Lopez said. “It’s going to be that way too in the 2020 presidential elections. I think with the world so interconnected, it’s important to care about politics of other countries. It’s our world, we should think this is our future. I think we should care about every election.”

While waiting for the election results to come out, President David Leebron and his wife Y. Ping Sun walked around tables talking to students at the watch party. Leebron also said he was excited about the increased young voter engagement this year.

“I’m excited to be here watching with students,” Leebron  said. “It is an important election — students are deeply interested. I think it’s great not just for our students, but young people. I hope to see generally much higher turnout in the future.”

Before the election results were officially announced, Rice faculty like Simon Fischer-Baum, assistant professor of psychology, said even though he was not optimistic about the odds of an O’Rourke victory, he was excited to see the way students became politically active this year.

“I’m very stressed,” he said. “I think we’re not very good at dealing with uncertainty so it’s very easy to be optimistic. That’s why it can be really devastating. I’m very hopeful he would win. If he does in fact lose, it will be sad. It was very exciting to see how long the line [to vote] was. This is the most engaged I’ve seen Rice students ever before.”

After the election results, some students remained sitting in the RMC Grand Hall to process what had just happened.

Wiess College sophomore KC Nwadei said she was furious with the results, but said she still hopes for the best.

“I’m kind of pissed off, not going to lie,” she said. “Ted Cruz disgusts me. If you see the results, it sucks. I was hearing a lot of things [Republicans] said after him winning disgusts me. It sucks, morally-speaking. How do you vote for a guy who endorses who he does? It shows that people have no empathy. If I know people supporting Ted Cruz, I won’t be friends with them.”

But after a few moments, Nwadei paused and said that she still wants to be optimistic.

“I can’t assume everyone thinks the way I do,” Nwadei said. “What happened happened. That shouldn’t discourage people from making a difference.”

Martel College sophomore Audrey Cabay also said she was disappointed with the results. . After visiting her second O’Rourke rally yesterday with a friend from out of town, she said she was very hopeful that he would win.

“I was like aggressively optimistic,” Cabay said. “I knew he most likely was not going to win. I really believed in him. He did great even if he didn’t win. I don’t want to look at Ted Cruz’s Chuck E. Cheese face anymore.”

Regardless of the election outcomes, Duncan College sophomore Jenny Wang said she wanted to have a positive outlook.

“From the Rice students I’ve talked to, we haven’t seen the Rice community this excited about a candidate,” Wang said. “I’m hopeful. Even if [Beto O’Rourke] doesn’t win, he’s representative of a bigger change of values and social issues.”